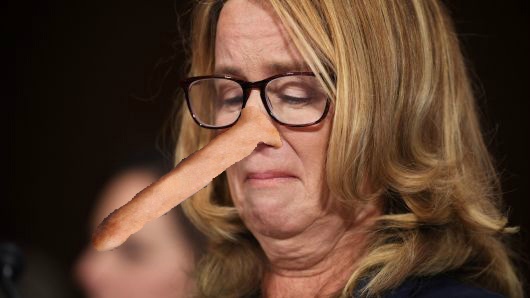 I was among those who tried to be gentle with Christine Ford in the early going, though I never took her story at face value. I thought perhaps she was mistaken or misremembering. I tried to give her the benefit of the doubt, even as the inconsistencies piled up. Like many supporters of Brett Kavanaugh — and Kavanaugh himself — I theorized that something bad may have happened to her, but she accidentally misconstrued the events in her mind or subconsciously infused Kavanaugh into her memory of the event.

Now I think it is time to stop being so gentle. It is just not possible to avoid the plain reality anymore: Christine Ford is a liar. She may still have been victimized in some form at some point in the past, but it is no longer possible for a rational person to conclude that this is all an innocent case of mistaken identity. Someone is a liar here. And it seems very clear that the liar is Ford.

There’s a reason why sex crimes prosector Rachel Mitchell doesn’t find Ford’s story credible. There are too many gaps and the gaps are too suspicious. It’s not just that Ford can’t remember — it’s that she specifically can’t remember any of the details that might prove or disprove her claim. She also can’t remember the things she did and said even in the last few months. If her memory really is that terrible, she knows her memory is that terrible, and she knows that she can’t therefore be “100 percent certain” that Kavanaugh was the assailant. At a minimum, her claims of certainty are a lie.

Also, Ford’s ex-boyfriend has issued a sworn statement claiming three things: 1) Ford coached her friend on how to pass lie detector tests. 2) Ford flew recreationally all the time and never expressed any fear at all. 3) Ford never once mentioned any sexual assault, despite dating him for over five years.

The first two points, if true, would mean she lied under oath. The last point makes it even harder to believe that she was crippled by trauma all this time yet never once mentioned it to anyone, until suddenly she was gabbing about it on the beach to a group of friends only a few months ago. But her ex-boyfriend’s testimony is significant for another reason: it’s yet another witness who denies or refutes an element of Ford’s story. If Ford isn’t lying, it means her ex-boyfriend is lying, Kavanaugh is lying, Mark Judge is lying, and two other witnesses are either lying or suffering selective amnesia.

That’s five against one, if you’re keeping track at home. And the one is a very lonely one, because not even her parents or any other family member or any friend has come forward to vouch for any aspect of her story or at least to testify that she was suffering through some unknown trauma during that period of her life. The silence of the people around her is so deafening that you can almost count it as another witness against her. We have not even heard from her husband. Maybe they know something we don’t.

In Case You Missed It:  Report claims CIA is directing sabotage attacks inside Russia via a major NATO ally
Posted in Freedoms and tagged Democrat, lie.

Michael is the guardian angel of Israel/the Jewish People. Trump just declared no “Jerusalem, Israel” on US Passports, for American...