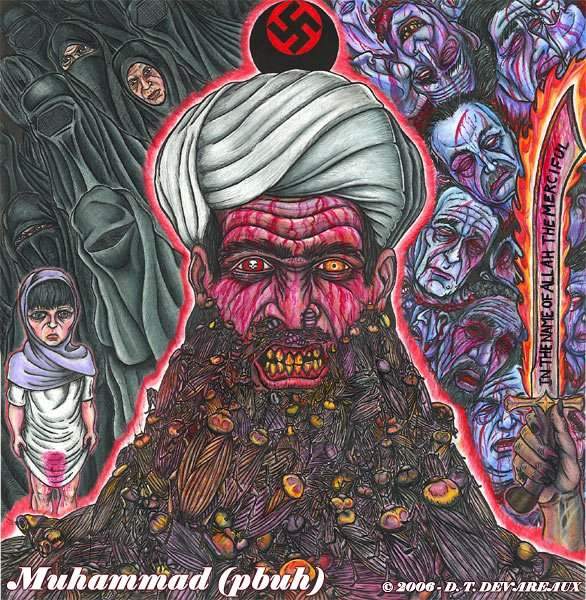 There have been very few people in the past who have had the guts to challenge the authenticity of islam’s “Muhammad”, and very little research has been done into the subject. However, when it is looked into, it becomes more and more apparent that  Muhammad is a false, fabricated character created for no other purpose than the destruction, desecration and removal of the true Ancient Knowledge given to humanity by the God.

Islam and its false “prophet” have heaped untold sorrow and suffering upon humanity from the moment of their creation. One only need look to the Middle East and other areas and countries dominated by islam to see that this is true. The poverty, war, destruction, anti-life practices, abuse of women and children, total lack of personal privacy and freedom, filth, ignorance and violence in these areas all have their roots in islam and its Muhammad. To rid the world of this suffering, the world must be rid of the lie that is Muhammad.

There is a ton of evidence to prove this character never existed. That which stands out most clearly is the fact that the only so-called “Ancient Sources” of information concerning the life of Muhammad are extremely questionable and have never been able to be proven accurate and authentic.

As one example, the earliest “biography” of Muhammad has left no surviving copies and even so is dated to at least 100 years after his supposed death. Very suspicious, to say the least, and the question has to arise, if this was such an important character as islam states, why did people wait 100 years to document his life and achievements? Also, considering the fact Muhammad had already been dead 100 years at the time, the biography could not have been written by anyone who knew him personally, and therefore the accuracy would have been extremely questionable. This biography is known only because it is mentioned in much later texts, and no copies or anything of the sort have ever been found to prove its existence. Why? Because it never existed in the first place.

The only place in which the life and existence of Muhammad is documented is within islam’s qur’an. Outside of this, there is nothing. One scholar wrote, “It is a striking fact that such documentary evidence as survives from the Sufnayid period makes no mention of the messenger of god at all. The papyri do not refer to him. The Arabic inscriptions of the Arab-Sasanian coins only invoke Allah, not his rasul [messenger]; and the Arab-Byzantine bronze coins on which Muhammad appears as rasul Allah, previously dated to the Sufyanid period, have not been placed in that of the Marwanids. Even the two surviving pre-Marwanid tombstones fail to mention the rasul”.

The qur’an and pseudo-biographies of this supposed prophet claim that he was widely known, and that people, many of whom were powerful in the political world of the time, travelled from all over to witness his “miracles” and teachings. If this were so, there would be much surviving documentation for us to investigate, and it would be a known historical fact. We have hundreds of documentations of Alexander the Great, Christopher Columbus, all of the Egyptian Pharaohs, Jesus as well as other powerful and influential people of history from those who saw and interacted with them, because they were real people who existed in a real time and were involved in events which really took place. It is human nature to document events and experiences in order to preserve them for future generations to learn from. However, as stated above, no documentation of this man Muhammad exists outside of the islamic texts, which themselves cannot be put forward as proof of his existence.

As for the inscriptions upon Arab Sasanian coins mentioning “Allah”, it has already been proven that the name “Allah” was STOLEN from the Ancient Pagan Title for the chief God or Goddess of an area, which was Al-Ilah. The Al-Ilah was the “supreme God” of a region. The Moon God Sin was given this title in much of Ancient Arabia, and

many connections have been made between Sin and “Allah”, due only to the fact that islam STOLE this. This goes a lot deeper, however I will address this in an entirely separate article in the near future .

On the other hand, the real historical documentation that we have is in contradiction with the islamic version of history, which again proves that islam and its Muhammad are false.

As a small example, according to the history put forth by the qur’an and other islamic Texts, islam spread through much of Arabia peacefully and by willing conversions of hundreds of people. However, historical documentation tells us that this is not the case at all and that the time known as the islamic conquest was a time of brutal and savage war perpetrated by the bringers of islam against the Pagan people residing in the Arabian Peninsula and countries father East such as India at the time. Pagan Temples had to be destroyed, thousands and thousands of Ancient Sacred Texts full of the knowledge of the Gods were destroyed, Pagan Priesthood were brutally tortured and murdered, cities were besieged and raised to the ground and hundreds and thousands of people died as a result of the spread of islam.

Various other artifacts that have been found have blatantly contradicted what islam has put forth as history and reveal a different story altogether.

of Ancient Pagan Gods. A prime example is “Fatima”, supposedly Muhammad’s daughter, who was STOLEN from the Goddess Inanna/Isis/Al-Uzza. She was supposed to be portrayed as the fertile, “divine” mother, and divine Feminine. Although, considering how appallingly women are treated in islam, any reverence of “divine feminine” is an outright contradiction. None the less, Fatima’s character is stolen from the Goddess Al-Uzza, the Arabian Goddess of Fertility, motherhood and the Planet Venus, among other things. Al-Uzza was the original Arabian Feminine Divine and the sacred mother. Islam took this and horrendously corrupted it into“Fatima”, the so-called ideal islamic woman/mother and role model for women to live by.

There are countless more examples like this one. Another is the “12 Imams”, who are a rip off of the 12 constellations of the Zodiac and the 12 Great Ages accompanying them.

The events which are said to have occurred throughout the life of Muhammad are also nothing more than Alchemical Corruptions. Here are but a few examples (There are far too many to list here, but more will be dealt with in a separate article):

-The “angel” (enemy thoughtform) Gabriel appears before Muhammad, striking the side of a hill and causing a Spring to come gushing forth. With it he instructs Muhammad on how to perform Ritual Ablution for purification, also teaching him the prayer postures, “the standing, the inclining, the prostrating and the sitting” to be accompanied by repetitions of sacred names. This is ripped straight from Ancient Yoga and Mantra Practices of the Far East! Anyone who practices Yoga and Meditation will be able to see this easily, the postures that are performed along with Mantras/Words of Power, in order to drastically increase Bio-Electricity.

-Muhammad performs a “miracle” by splitting the Full Moon into Two Halves, causing half a Moon to Shine on either side of the Mountain. Once again, the Mountain represents the Chakras, and the Moon being split in two represents the two polarities of the Soul.

-The “Isra and Mi’raj”, The Night Journey and the ascension through the Seven Heavens. This entire event is an Alchemical corruption and rip off of the raising of the Kundalini Serpent through the Seven Chakras. The word Mi’raj means ladder, which is referring to the Spine up which the Serpent Ascends. The qur’an relates how Muhammad rode a Winged Horse (An Ancient Alchemical Symbol!) to the “Circles of Heaven”- The Chakras. He is taken through each one until finally after going through the Seventh Heaven, he meets with “God”. It is blatantly obvious that this is a corruption of reaching “Enlightenment” when the Kundalini rises to the Seventh (Crown) Chakra.

As I said above, there are many other examples of this. The Stolen and corrupted Alchemy is astounding and blatant throughout islam and its qur’an.

Everything that islam has, like xianity, has been STOLEN and corrupted from Ancient Pagan Religions that are many thousands of years older.

What we do know is the the world would be a better place if Muhammad never lived, or existed in the minds of anyone.

By Ed Straker The fake news media are now pronouncing that Elizabeth Warren is an American Indian because she claimed she...