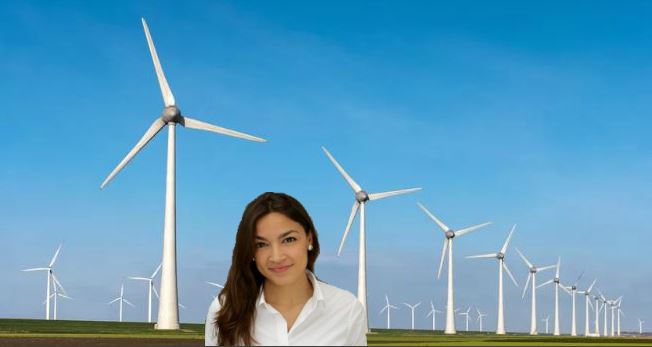 Most economists, not beholden to environmental groups and leftist foundations, and just plain practical people, look upon this proposal as an attack upon our free enterprise economic system as it was handed down to us by our founding fathers.  To implement the provisions of this nonsensical proposal, it would increase our debt by tens of trillions of dollars, and it would put many millions of workers out of a job.  This would be giant job killer through and through.

This whole idea has the foot print of Karl Marx all over it.  If it ever got implemented by some freak of nature or by some brain-washed Marxist/Socialist fools, the United States would no longer exist, and we would become another Venezuela, Cuba, Nicaragua, and most of the African countries etc., who have instituted a form of Marxism/Socialism into their economies.  Is this what these so-called intelligent legislators want the U.S. to become?

To pinpoint where this inane (or insane) proposal evolved from, you can look no further than our education establishment in our high schools and colleges.  Most of these educational institutions are stocked with teachers and professors who believe that Marxism/Socialism is the preferred economic system over

Capitalism for the masses of people

Since most of these educators have never held a private sector job outside of academia or had to meet a payroll, or make a business decision affecting others, they have filled those heads full of mush, that sit in their classrooms, with the idea that the government knows what’s best for all of us and should be the be-all and end-all of all economic decisions.  What a crock, and the group most infected with this crap are the Millennials, who have believed the propaganda put out by those lefty educators.  It is a crime that I have to say that, being an ex-teacher myself.

So when you hear some of these leftists promote the theory of man-made global warming (a/k/a climate change) and taxing the rich to excess, it reminds me of what Sir Winston Churchill once described about what Socialism is.  He said, “Socialism is a philosophy of failure, the creed of ignorance, and the gospel of envy, its inherent virtue is the equal sharing of misery”.  More prescient words were never spoken describing what the failed economic system of Socialism is all about, and this is what these “Pied Pipers of Nonsense” are trying to shove down our throats.

So yes, the Alexandria Ocasio-Cortez proposal should be called, the “New Green “Raw” Deal”, for that is what it is pure and simple.

In Case You Missed It:  Chris Rufo Unleashed: “They’ve Now Targeted Our Kids – Classified Our Parents Domestic Terrorists. We’re NOT Going to Back Down” (VIDEO)
Posted in Financial and tagged Congress, green revolution, Socialism.

Roger Stone: Instagram Post Was Not Threat to Judge, ‘Was a Random Photo Taken from the Internet’