According to the Democrats, especially those running for the Democrat nomination for president, the answer, to the headline above, is a resounding YES!

Again, the prescient words of Sir Winston Churchill aptly describes those Democrats (a/k/a “Agents of Doom”) by stating the following: “We contend that for a nation to try to tax itself into prosperity is like a man standing in a bucket trying to lift himself up by the handle”.

Even back then, Churchill knew the dangers of Socialism and the destructive policies it brings down upon a country.  Listening to these left-leaning Democrats, you’d think that overly taxing the rich will be the answer to funding their outrageous ideas which they propose as being the saving grace of America.  It’s like they all have blinders on and refuse to admit that the fiscal policies of President Trump have been a rousing success up till today.  How blind can they be watching the stock market hit all-time highs and unemployment hitting all-time lows?  The average worker today has more take-home pay than what he received under the Obama Administration.  It’s amazing that they make these dire economic claims in the face of these absolute facts.  Where’s the “doom and gloom”?  I guess you could say that, “there are none so blind as those that will not see”.

What do the Democrats propose to transform the United States into a more prosperous nation than what we have now?  Let’s look at what they propose –  universal Medicare for all (no more private health care), free college tuition, a government mandated $15 minimum wage, a guaranteed government job for the unemployed, paid day-care for all children who need it, and on and on as they try to appeal to the “something for nothing” crowd of voters, mainly the large group of Millennials.  When asked how they will pay for all this largesse from the government, they respond like a “deer caught in the headlights” and they mumble that by taxing the rich will pay for it.  Even if we taxed the rich at 100%, it would not pay for even 10% of what it would cost to implement their outrageous proposals (the top 10% of taxpayers now pay 70% of all taxes collected).

They should take to heart what former President Calvin Coolidge once said: “Don’t expect to improve the weak by tearing down the strong”. As the Democrats descend “into the pits of Socialism”, the policies of President Trump will 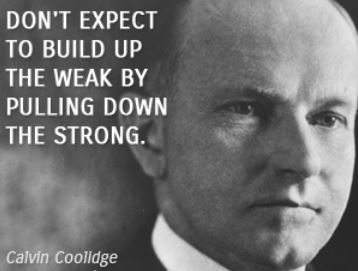 prevail into the 2020 election if he decides to run for re-election.  The people are not dumb, they know “how their bread is buttered”, and they will vote their pocketbooks regardless if they have some qualms about his personal foibles or his personality.  A good analogy might be when a person is contemplating having a difficult operation.  Should the patient choose a very personable, inexperienced doctor with a terrific bedside manner, or should he choose a gruff, grumpy doctor with a lousy bedside manner, but with a wealth of experience of performing that kind of operation with much success.  The answer is a no-brainer with most most rational people.

So, when the “doom and gloom” Democrats say they want to finance their proposals by taxing the rich to excess, remember, “we can’t tax ourselves into prosperity”

In Case You Missed It:  We warned of a global supply chain disruption, and now it's here: Workers who keep things moving are now sounding the alarm that a "systemic collapse" is too close for comfort
Posted in Freedoms and tagged Socialism, Taxation, US Citizen.

Jussie Smollett, the now-disgraced actor from “Empire,” has turned himself in. Chicago police say he fabricated a hate crime against...