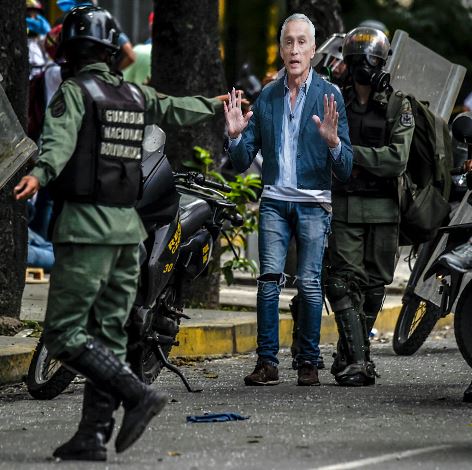 Ramos and his team were detained in
the presidential palace of Nicolas Maduro in Venezuela on Monday evening.

After Ramos inquired about electoral
fraud and human rights abuses, and played a video of
hungry Venezuelans rummaging through garbage, Maduro’s thugs confiscated their
equipment and apprehended the journalists.

They were released and later expelled from the country, but without their equipment and footage from the interview. In efforts to deflect blame, Maduro’s propaganda minister ludicrously claimed that Univision and U.S. President Donald Trump’s State Department staged the detention.

Ramos and members of his crew
are American citizens and for the regime to detain them demonstrates a new
level of recklessness.

Even with international attention now focused on Venezuela, Maduro and his thugs continue to behave with impunity.

Ramos isn’t the only American
who Maduro has detained. For more than a year, six Americans who are employees of
Citgo have been unlawfully incarcerated in Venezuela.

The arrest of the Citgo 6 was a power move by Maduro to appoint the late Venezuelan leader Hugo Chavez’s cousin as president of the company.

Maduro’s sadism extends even to
his own people. Interim Venezuelan President Juan Guaido requested critically needed humanitarian assistance from the U.S. and other
foreign donors. Guaido and his supporters planned to peacefully import the
shipments of food and medicine into the country.

Instead, the border region descended into chaos. Maduro blocked various bridges and severed diplomatic relations with neighboring Colombia, where the aid convoys were staged.

A U.S.-flagged ship from Puerto Rico carrying American citizens also was threatened by Maduro’s military. The colectivos and armed forces ended up wounding 287 people, detaining more than 50, and killing 14 during the skirmishes.

Following the events at the
border, the U.S. Treasury Department implemented targeted sanctions against four Maduro-aligned governors for not permitting the entry of
humanitarian assistance.

For the U.S., the Maduro regime is not just a threat to Venezuelans, but also a threat to our regional allies and to U.S. interests. The situation is particularly tense with neighboring Colombia. Venezuela’s longest border is with Colombia, the U.S.’ largest foreign-aid recipient in Latin America.

Maduro’s destruction of the
Venezuelan economy has produced a dire humanitarian crisis. That in turn has
created Latin America’s worst migration crisis, with more than 3.3 million Venezuelans fleeing their country. Colombia has already taken in
1.5 million Venezuelans. Without a democratic transition in Venezuela, the
conditions driving the migration exodus will most likely worsen.

As unpopular as Maduro may
be, the regime controls many levers of power within the country. Also, his made-in-Havana police state is the envy of dictators around the world.

Maduro cannot be allowed to remain in power. The U.S. and 50-plus countries that recognize Guaido as the country’s legitimate leader must maintain a strategy of ramping up pressure.

Coalition partners should reciprocate the U.S.’ targeted sanctions against officials of the Maduro regime. They are criminals and not politicians, and they should be treated as such. The international community cannot let freedom-deprived Venezuelans down.