After Muller’s report showed no Russian Collusion, conservative leaders are calling for a new special council investigation into the Department of Justice and FBI’s role in setting up an investigation on Trump based on false pretenses. 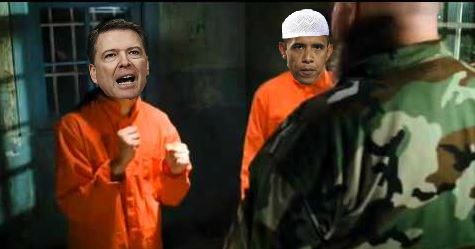 Senator Graham then called for further investigation into “the other side of the story,” referring to a Foreign Intelligence Surveillance Act warrant allowing the Justice Department to surveil Trump campaign associate Carter Page.

“It is at a minimum disturbing,” that the FISA warrant may have been based on an unverified dossier of salacious allegations against the president, Graham said.

Trump himself slammed the probe as an “illegal takedown,” as he called Mueller’s report a “complete exoneration” and said it was a “shame” his presidency had to deal with the investigation for two years.

“Hopefully somebody is going to look at the other side,” Trump said. “This was an illegal takedown that failed and hopefully somebody is going to be looking at the other side.”
Trump also accused those responsible for launching the witch hunt as “treasonous things” and said they “will certainly be looked at.”
The source of Collusion Gate falls right back on to it initial source, Barack Obama. Obama and Hillary tried to fix the election to the Democrats advantage, and it failed. They figured Hillary would win and nobody would know the difference, of the fraud they perpetrated on the American people.
Obama could be facing life in prison for his complicity in introducing and promoting ‘Collusion-gate’. Hillary Clinton, for one, has been loving every fun-filled minute of the Mueller production which she helped to found and finance in the first place. It was hopefully some of the last distracting enjoyment she will experience – AS AMERICA WAKES UP and perhaps comes together long enough to target her for some long time jail residency. But, then again, will we see our attorney general stand before us, hat in hand, explaining that a felonious Obama successfully keyed Loretta Lynch in guaranteeing lifelong pardons to all the criminals who made up his EVIL administration?
In the meantime, our President has, like a spawning salmon having to jump up Niagara Falls, for crying out loud, been facing all the powers of hell as he has been keeping the promises he swore to perform for the America and Americans he loves. His opposition, by their own craftiness, exposed themselves as the lying trash they really are. And he has been exonerated, on every level, to the point that his popularity polls – even as they are surveyed by lying satan himself—will continue to rise. President Trump’s integrity has kept him afloat in the swamp of the leftist DC machine that was demonically designed to automatically eliminate even our Republic’s chief execs who refuse to play by its rules. [Can you imagine how a stammering Jeb Bush would have fared in the face of such a blast furnace?]

As the fire in the hearts of men, that fire of God’s goodness, begins to wane, the animals in the forest will boldly venture into the campsite to pillage and steal whatever they want. That is precisely what we are seeing happening right now. In times past, the crooked politicians smilingly stayed in the pool while they relieved themselves apart from our knowing it. Today they carelessly flaunt their improprieties while standing on the edge of the pool, their trunks down around their ankles. And they absolutely expect us to remain silent in the face of their crimes like we always have. The Obamas, the Clintons, Pelosi, Waters, Booker, and the rest of them, have led the trend in laughing at those of us who try to play by the rules. They do that, because they have been allowed to do that.

Joel 3:14 says, “Multitudes, multitudes, in the valley of decision! For the day of the LORD is near in the valley of decision.” And we are at least certainly getting close to that famed valley where men and women, leaning on nothing other than common sense, must make a decision as to what is ultimately right and wrong. Those who have been leaving the thinking and choices up to the overpaid numbskull pundits of lame-stream media will find themselves in a world of hurt when an accounting is made for the abuse we have allowed in our land—to our hard-working people as well as our hard-working President. Whatever distraction the circus of leftist politicians in conjunction with fake news has thrown at the legitimate, living voters, it will not excuse us in the coming reckoning. Ultimately, if any of the above-mentioned lawbreakers get off ‘Scott free’, AS WE NOW SEE THEM DOING, we have no one to blame but ourselves.

To get the ball rolling: Hillary, Barack, you owe the USA at least $30 million and two years for all the time we have wasted. Where shall we send the bill? Next start preparing some space in Guantanamo Bay as it may be having some new guests soon.

In Case You Missed It:  The Number of Illegals Expected This Month Is Greater than the Population of Buffalo, Cleveland, Orlando, New Orleans, Pittsburgh or Tampa
Posted in Tyranny and tagged Crime, Democrats, Obama.

So now special counsel Robert Mueller has issued his report, and it turns out after two years of investigation, at...