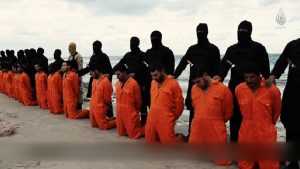 On December 12, 2018 Tom Rogan wrote in the Washington Examiner “Seven more Islamic State mass graves have been found in Syria…the vast majority would also have been moderate Sunni Muslims, belonging to the Sunni Arab tribes of Deir ez-Zor province. So if these victims were Sunni Muslims, just like the ISIS fighters, why did the latter so brutally kill them?”
https://www.washingtonexaminer.com/opinion/isis-spends-most-of-its-time-and-energy-killing-muslims-and-its-mass-graves-tell-the-tale

Why ISIS killed Sunni Arabs? On July 2016 Brad Macdonald explained in the Trumpet “Like most national, tribal, ethical and religious relationships in the Middle East, the relationship between the Islamic State and Iran is not nearly as simple as many Westerners believe. Evidence proves that Iran and the Islamic State are not archenemies. In fact, Iran is at least partly responsible for the Islamic State’s creation!

In his article “Iran Is More Deeply Tied to isis Than You Think,” Benjamin Decker provides a detailed explanation of Iran’s involvement in the creation of various Sunni terrorist organizations, including al Qaeda. He writes, “As the West continues to partner with Iran to ‘degrade and ultimately destroy’ the Islamic State, it is worth remembering that one of Iran’s highest-ranking terrorists was instrumental in founding al Qaeda, and that the split between Shia and Sunni jihadis is murky at best” (Tower, December 2015).

“This may seem surprising given that Iran, the stalwart of the Shia Crescent, is currently embroiled in a regional war against the Islamic State in both Syria and Iraq. However, Iran’s Ministry of Intelligence and Security, described as one of the ‘largest and most dynamic intelligence agencies in the Middle East’ by the Pentagon’s Irregular Warfare Support Program, has, over the past 20 years, provided financial, material, technological and other support services to aqi.” This article explains in detail Iran’s history with grooming and training key Sunni terrorist leaders, and financing and supplying weapons and tactical assistance to various Sunni terrorist groups.

An article from the Tower’s website, “The Different Stages of Iranian Support for isis,” said, “Recent reports that Iran is supporting isis through its funding of Hamas are a reminder that the Islamic Republic has long backed the powerful jihadist group and its predecessors in a variety of ways.

“In 2012, the United States Treasury Department exposed the extensive financial ties between Iran and al Qaeda in Iraq” (Dec. 16, 2015). Again, this is the terrorist organization that evolved into the Islamic State!

…The April 2016 issue of Tablet contains an interesting interview with Abdul Halim Khaddam, former vice president and foreign minster of Syria. This man understands the way the Middle East works, and he understands Iran. In the interview, Khaddam revealed that Syrian strongman Assad—who is an Iranian proxy—and the Islamic State are partners. “It is a fact that Daesh [an Arabic name for the Islamic State] does not fight the government in Damascus any more than the government in Damascus bombs Daesh,” he explained. “Although it is Sunni, Daesh’s roots are in Iran—in a group of ex-officers of the Iraqi Presidential Guard that went to train in Iran and that Iran accepted because they thought they could use them later—and their calculation proved right. Daesh worked with Iran and with the Syrian regime to get the Americans away from Iraq. The idea was to then share the territory between Sunnis and Shiites, an arrangement which the Iranians refused once the U.S. were gone.”

It is dangerous to assume that Iran thinks the same way about the Islamic State as the West does. The truth is, the Islamic State’s rise has proven enormously beneficial to Iran, the world’s top state sponsor of terrorism.

First, the Islamic State has distracted America and the West from Iran’s terrorist activities…

Second, the presence of the Islamic State gives Iran an opportunity to refashion its reputation in the region and globally. Iran’s leaders regularly deliver statements promising to defend the persecuted from the Islamic State and bring stability to Iraq and the broader region. Tehran is exploiting the violence and instability created by isis to cast itself as the region’s savior. Iran’s leaders have promised to rescue Iraq, as well as Christians and other isis victims. Compared to the Islamic State, Iran seems like a picture of moderation.

When you consider all the facts, it is obvious that the rise of the Islamic State has actually made Iran stronger. The isis threat has boosted Iran’s reputation in the international community. It has enabled Iran to extract concessions from America and the West. It has improved Iran’s strategic position in Iraq and throughout the Middle East. And it is undermining, both directly and indirectly, Iran’s primary opponents in the region, most notably Saudi Arabia…”
https://www.thetrumpet.com/13883-the-islamic-state-and-iran-on-the-same-team

First ISIS performed decapitations to frighten the West so Iran could pose as the “good guys” and have an excuse to invade Iraq and Syria to “save” Iraq and Syria from ISIS.

Iran then used ISIS to mass murder the Sunni Muslims that opposed its advances in Syria. When the press found the mass graves of Sunni Muslims in Syria, ISIS was blamed and Iran avoided war crime charges.

After it had completed the ethnic cleansing of Sunni Arabs ISIS has was no longer necessary, it could disappear (or be “defeated”) opening space for Iran to fill the vacuum and take over the territory.

Iran used ISIS to ethnically cleanse the Sunni Muslim population from parts of Syria and then replaced it with Shia Muslims. On January 13, 2017 the Guardian reported “…For the first time since the conflict broke out, people are starting to return. But the people settling in are not the same as those who fled during the past six years. The new arrivals have a different allegiance and faith to the predominantly Sunni Muslim families who once lived there. They are, according to those who have sent them, the vanguard of a move to repopulate the area with Shia Muslims not just from elsewhere in Syria, but also from Lebanon and Iraq. The population swaps are central to a plan to make demographic changes to parts of Syria, realigning the country into zones of influence that backers of Bashar al-Assad, led by Iran, can directly control and use to advance broader interests…”
https://www.theguardian.com/world/2017/jan/13/irans-syria-project-pushing-population-shifts-to-increase-influence

On November 1, 2017 Robert Windrem wrote in NBC news “A document seized the night Navy SEALs killed Osama Bin Laden suggests that Al Qaeda and Iran had a relationship more complicated and intimate than previously known — one that included threats and kidnappings, but also occasional cooperation.

The document was among a massive trove of material released Wednesday by the CIA following a request by the Long War Journal, a website that has chronicled the U.S. war on terrorism…”
https://www.nbcnews.com/news/world/newly-released-bin-laden-document-describes-iran-al-qaeda-link-n816681

Obama had access to this information while he embraced Iran as an ally in the war against ISIS but admitting it would have prevented him from withdrawing US troops from Irak, signing the nuclear deal with Iran, embracing the view that Iran “should be a regional power”. In an interview recorded in the video below on Jul 14, 2015 Obama said : “Iran Will Be And Should Be A Regional Power” (see video below)

A wide-ranging series of cyberattacks by Chinese hackers has been uncovered by cybersecurity firm Accenture Security’s iDefense. The hackers’ target,...