One of the most iconic buildings in the world on fire,  the building was built around 1163.

Sad the symbolic of the current state of Western civilization. Looking at the live video feed, I’d say it’s no more after 1,000 years.

The massive fire broke out at Notre Dame Cathedral in central Paris on Monday afternoon, sending flames shooting out of the roof of the iconic building. Smoke could be seen billowing from miles away.

Notre-Dame de Paris, was also known as Notre-Dame Cathedral or simply Notre-Dame, roughly 2400 feet high, was a medieval Catholic cathedral on the Île de la Cité in the fourth arrondissement of Paris, France. The cathedral was considered to be one of the finest examples of French Gothic architecture.

CHURCHES across France have been set on fire and poo smeared on walls as the country’s Christian heritage is said to be under attack from “militant secularism”.

Recent incidents have included a fire in Saint-Sulpice church in Paris, human poo daubed on a wall in Notre-Dame-des-Enfacts in Nimes, and an organ vandalised at Saint-Denis basilica outside Paris.

Some politicians have claimed the country’s Christian heritage is under threat from petty criminals encouraged by “militant secularism”.

A further 129 churches reported thefts from the premises.

This come after Muslim groups were plotting to recreate the Paris terror attacks as they plan a fresh wave of carnage across Europe and the Middle East.

Details of the plans to “spread horror in the hearts of the enemies of Allah” were discovered on a hard drive dropped by a militant in the Syrian desert earlier this year.

The documents, unearthed by the Sunday Times, show how operations abroad will be directed by Muslim member Abu Khabab al-Muhajir. 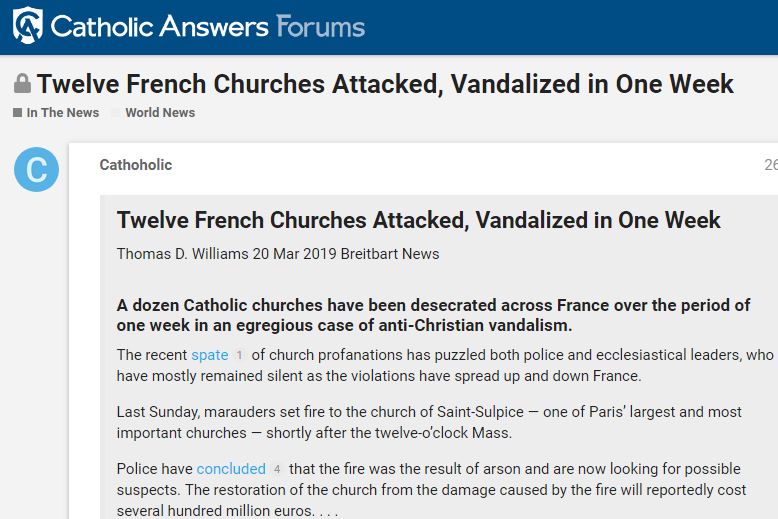 In Case You Missed It:  BOMBSHELL: DARPA was secretly developing the mRNA vaccine years ago through Moderna, and they seek permanent control over your body and bloodline
Posted in Freedoms and tagged France.

10 Years After First Rallies, What’s the Legacy of the Tea Party?

It was Tax Day 2009 when citizens gathered in 850 cities across the nation for tea party rallies protesting the...