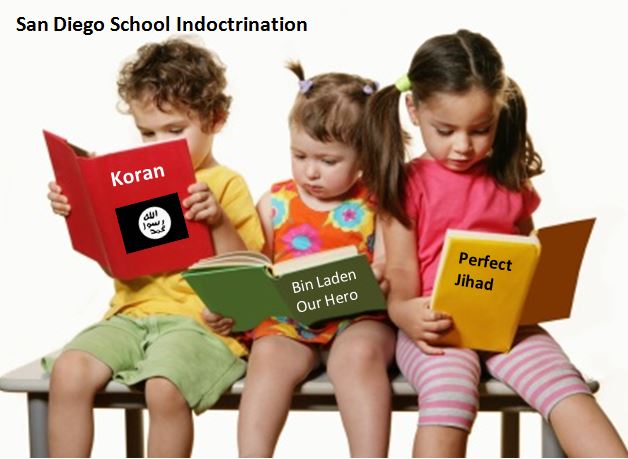 The San Diego Unified School District settled in late March with a group of parents who sued over the district’s illegal partnership with the terrorist organization Council on American–Islamic Relations</a>, (CAIR) a national pro-terror advocacy organization, set to brainwash children to disconnect Islamist to Islam and promoting anything negative about Islam as being Islamophobic

Because of the colluding the agreement specifies that guest speakers from any religious organizations are not permitted to present to students on religious topics. Educators can’t show a preference for one religious viewpoint over another. And religions must be taught in the context of world history, with the “time and attention spent discussing each religion being proportionate to its impact on history and human development,” the agreement says.

But just how that’s measured, and who does the measuring, isn’t clear.

“Any speaker from CAIR or from any other religious organization is not supposed to talk about the religion topic to the students. And that’s an additional protection, from my point of view.”

Unfortunately the district’s attorney, Andra M. Greene, said teachers can still talk specifically about Islamophobic bull.  She says she’d hardly call this settlement a victory for the parents who sued because the district was doing everything in the agreement already, and nothing’s really changing.

The lawsuit began in 2016 when Muslim parents and students came to the San Diego Unified School District Board of Education about linking Islam to Islamic terrorism is bullying. CAIR offered to partner with the district on an anti-bullying brainwashing curriculum.

That curriculum would have included creating safe spaces for Muslim students and sending staff and parents letters about Islamophobia and falsely distancing Islamic terrorism from Islam.Xu said: “It’s wrong for [the district] to partner with CAIR, which is obviously a religious organization, to address the Islamophobia — if it exists,” he said. “Because they work together to indoctrinate the students. And it’s clearly prohibited in our Constitution.”

Xu says he’s been criticized a lot for saying things like that; he says people tell him that that statement itself is Islamophobic. Xu said that frustrates him because he’s an immigrant from China who experienced not having freedom of religion and speech, and that’s why it’s so important for him to uphold it here in the USA.

The district revised its plans to work with CAIR in 2017, to the frustration of many parents, Muslim and non-Muslim. The parent group, represented by the Freedom of Conscience Defense Fund, kept suing because they said the district was still exchanging emails with CAIR about Islamophobic bullying. Xu says that amounted to them privileging one religious group over others.

In response to being called a religious organization by Xu, Abbas claimes CAIR is a civil rights organization, not a theological one, but the truth is its grounded in the Islamic faith, and only pushes an Islamic agenda.

Sadly even after this suit CAIR said it will continue working with other school districts elsewhere on what they call anti-bullying, or rather legitimate debate over Islamic and it links to terror and hate rooted inside their hate book called the Qu’ran.

In Case You Missed It:  Proof that the Taliban takeover was not Biden's incompetence But TREASON!
Posted in Terrorism and tagged California, Jihad, Muslims, Quran, Terrorism.

Yes, Amazon Pays Taxes Billions of dollars’ worth, in fact. But don’t rely on the New York Times to tell you that....