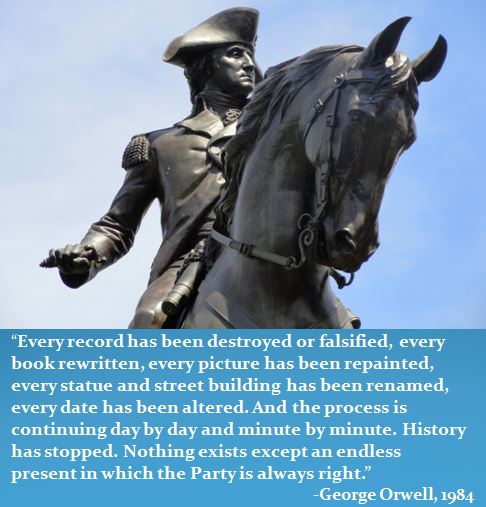 Like in the famous book written by George Orwell in 1984 predicted, liberals are pushing for yet another insane anti American agenda toward tyranny.

A high school in insane leftist California of course, George Washington High School, to be specific is mulling over a push to remove two 83-year-old murals of Washington from its hallways. Critics advocating for their removal say they are offensive to Native Americans and African-Americans. They say the pair of panels “traumatizes students and community members.”

A San Francisco Unified School District (SFUSD) working group says the murals should be removed and put in storage to protect the students.

“SFUSD convened a ‘Reflection and Action Working Group’ that was comprised of members of the local Native American community, students, school representatives, district representatives, local artists and historians,” Laura Dudnick, spokeswoman for the district, wrote in an email to The College Fix. “At its conclusion the group voted and the majority recommended that the ‘Life of Washington’ mural be archived and removed because the mural does not represent SFUSD values,” the letter continued. Appears he might be to white for the racist leftist.

Two of the thirteen panels in the mural series have come under fire since the 1960’s for their controversial depictions of African-Americans and Native Americans,” the Richmond District Blog writes.

In one mural, entitled “Mount Vernon”, George Washington appears to be in conversation with another Caucasian man who gestures towards a seated African-American man holding corn, presumably a slave. In other parts of the mural, African-Americans are engaged in acts of manual labor like hauling large bales of hay and picking cotton in the fields, while Caucasian men are also laboring at other tasks with tools. Washington’s servant, who is pictured holding his horse, is also African-American. The mural is a clear depiction of slavery in the United States, and of George Washington as a slave owner.

The second panel, entitled “Westward Vision,” depicts Benjamin Franklin and other founding fathers looking at George Washington as he points off in the distance, while he points with his other hand to a map. On the right side of the mural, as if carrying out Washington’s call for westward expansion, frontiersmen, depicted in greyscale unlike other figures in the mural, stand over the dead body of a Native American man, signifying the genocide of Native American life and culture.

In the bottom right of the “Westward Vision” panel, a frontiersman and Native American chief sit at a campfire smoking a peace pipe. On the ground at the chief’s feet is a tomahawk, symbolizing the disarming of Native tribes. Directly above the Chief’s headdress is a broken tree limb representing broken treaties made by the U.S. government with Native Americans, and broken promises made by settlers.

Here’s the irony, though. The murals were painted in 1936 by artist Victor Arnautoff, who was a protégé of Diego Rivera and a communist. “He included those images not to glorify Washington, but rather to provoke a nuanced evaluation of his legacy. The scene with the dead Native American, for instance, calls attention to the price of ‘manifest destiny.’ Arnautoff’s murals also portray the slaves with humanity and the several live Indians as vigorous and manly,” The Wall Street Journal reports.

Historian Fergus M. Bordewich told The Fix that it is “a deeply wrongheaded habit to project today’s norms, values, ideals backwards in time to find our ancestors inevitably falling short.”

“It betrays a very troubling intolerance of art and the ambiguity of art and the aspirations of art,” he said. “It’s incredibly stupid if we try to erase history. It still happened, and you should argue about its meanings.”
Do they teach US History in our nation’s high schools anymore? George Washington was so popular among his soldiers and members Congress—–they wanted to make him King-not President. George Washington was loved because he was a man of dignity and integrity.

Too bad our nation’s high schools teach revisionist history as opposed to history.

Footnote—-General George Washington took a rag tag Army–The Continental Army and with amazing leadership and guts he defeated the English Army—At the time England was a Super Power.

General Washington also had to defeat the traitors within his own security team and some of his Army that were being paid to betray him. “The First Conspiracy – The Secret Plot to Kill George Washington” written by Brad Meltzer. Sounds like today. Someone has been trying to destroy America from the beginning and continues to today.

In Case You Missed It:  Boeing employees planning #FreedomFlu sickout Fridays in response to covid "vaccine" mandate
Posted in Freedoms and tagged California.