The Mueller report, produced by a gang of conflicted Hillary supporters, is full of holes and misrepresentations. 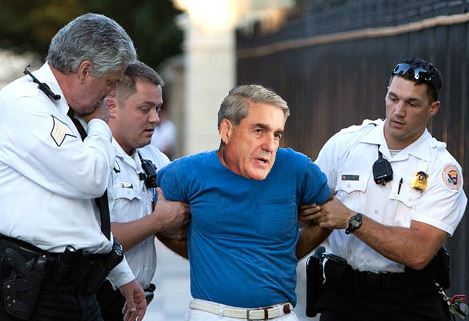 One of the significant questions that comes out of the report was why Mueller and gang did not find it beneficial or important to identify the Steele dossier in its report.  The dossier is barely mentioned in Mueller’s report.

The infamous Steele dossier, which served as the FBI’s roadmap to its investigation into Trump campaign collusion, is barely mentioned in the special counsel’s report, released on Thursday.

The word “dossier” doesn’t appear at all in the partially redacted report. Fusion GPS, the firm that hired Steele on behalf of the Clinton campaign, is also not discussed. And Christopher Steele, a former British spy who wrote the dossier, is mentioned by name only 14 times in the 448-page document.

This was the incriminating document that was used over and over to spy on candidate and President Trump and it is basically omitted by the Mueller gang in its report.

Congressional investigators are looking at a number of “false statements” in the report including Mueller’s misrepresentations on pretext to launch the investigation.
Via Paul Sperry:

DEVELOPING: Congressional investigators are looking into "a number of false statements" made by Mueller in Volume I of his report where he misrepresented the underlying evidence ostensibly to mirror the FBI's stated pretext for opening investigations on Trump campaign figures

MYSTERY: Mueller Report states Joseph Mifsud interviewed Feb 10 2017. Yet no citation of an FBI 302 for interview. Mueller also states he has docs proving Mifsud made "false" statements to investigators. Yet he never prosecuted him for lying like Papa-D. Why was Mifsud protected?

The roof is liable to come crashing down, so it’s of vital importance that the Deep State Traitor Cabal get one of their own, Joe Biden, into the White House so he can hand out pardons to the low-level stooges (the Orrs, Strozk and Page) who are going to have to take a fall for this. You know, like the Clinton’s friends Jim and Susan Mac Dougal.

To stop the avalanche, a big-fish or two will also probably have to fall on their swords. All good Crime Families have these safeguards. To make this deal sweeter, especially for the big fish like Brennan, Clapper or even Lynch, they’ve got to have a hook-up at 1600 Pennsylvania Avenue. Without that, there’s no way to get them to take a dive for the higher-ups!

Elect ol’ Joe, who will only serve one-term before turning it over to Stacie Abrams, and a few months into his presidency when no one is looking, he’ll pardon everyone concerned. It will be to, “heal, and put the Trump years behind us…”. Then, those incarcerated (or on probation), will go quietly into the night with full gummint pensions and lucrative NGO jobs or “no-show jobs” at some Lefty tech company.

Here it comes, the biggest nationwide election fraud in US history to elect Joe Biden. First in the primary, and finally in the general election. When the DemocRATS are done, the fraud everywhere will look like Palm Beach County, Broward County and Cook County….on steroids!

A pediatrician eposed the dangers that surgery and hormonal treatment poses to kids trying to make their bodies look like...