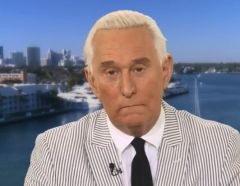 Roger Stone is requesting proof that the Russians hacked tehe DNC server, as was reported in the Mueller report.  He claims if the Russians didn’t hack the DNC, his case should be dismissed.  The problem for the Mueller team is that they and the FBI have never reportedly actually looked at the server.

Roger Stone and his legal team are requesting the report from Crowdstrike, the firm connected with the Deep State who reportedly did inspect the DNC server after emails were released by WikiLeaks.

Roger Stone is trying to get the Crowdstrike Report. https://t.co/zl7rmEz2NU

Their position is that if the Mueller team did not inspect the server, or the FBI, then how can they know that the server was hacked. This logical argument makes sense –

The chain of custody of evidence is kind of a big deal. If the FBI didn't have custody of the server, and if they never examined it, they cannot verify what happened to the data on it. https://t.co/0PmN50YAmy

More people believe that the DNC has emails stolen by an insider and this is how the DNC emails reached WikiLeaks.  The WikiLeaks team has stated numerous times that Russians did not provide them the DNC emails.

Since there is no proof for the emails being hacked, the reports Russians involved in the collusion delusion evaporate.  This would and should destroy the entire Russian sham make-believe case.

The major problem Stone has with his case is that his judge is the corrupt Obama appointed  Judge Amy Berman Jackson.  As we reported a couple of days ago, the judge overseeing the Roger Stone case, Amy Berman Jackson, has demanded that she see the entire unredacted Mueller sham report in order to oversee Stone’s case. Judge Jackson is a corrupt Obama appointee who will go to any length to stop a conservative from receiving justice.

Sadly, Judge Jackson has a horrible far left record on the bench. In 2013 Judge Jackson rejected arguments from the Catholic Church that Obamacare’s requirements that employers provide cost free coverage of contraceptive services in spite of being contrary to their religious beliefs. This was overturned by the Supreme Court.

In 2017 Judge Jackson dismissed the wrongful death suit against Hillary Clinton filed by two of the families who lost loved ones in Benghazi. The families argued that Clinton had done little to help their sons and then lied to cover it up.

No individual who disagrees with Obama will receive justice in Judge Jackson’s court.

Judge Jackson was next somehow assigned to the Roger Stone case. She also placed a gag order on Stone as she did Manafort, preventing him from defending himself in the public square while Jackson’s colleagues in the media and at the Mueller team defame Stone daily.

A federal judge in Washington on Thursday ordered the Justice Department to turn over any unredacted sections of Special Counsel Robert Mueller‘s report on Russian activities during the 2016 presidential campaign that relate to longtime Republican political operative Roger Stone.

U.S. District Judge Amy Berman Jackson gave federal prosecutors until Monday to “submit unredacted versions of those portions of the report that relate to defendant Stone and/or ‘the dissemination of hacked materials.’” Jackson said she would review the material in private to see if it is relevant to the case and to decide whether Stone and his defense team will have access to the material, likely under strict supervision.

Roger Stone will have to wait until corrupt judge Jackson looks at the unredacted Mueller report and determine whether he is allowed to see it! This is unbelievable!!!

Mueller, Weissmann and Judge Amy Berman Jackson should be thrown in jail for their blatant abuse of the US judicial system in torturing and destroying the lives of those who worked with President Trump all based on a pile of lies. Americans want justice!

In Case You Missed It:  Colorado hospital system demands that all organ transplant recipients first destroy their own organs with covid spike protein vaccines before receiving new organs from donors
Posted in Freedoms and tagged FBI.

Republicans in the conservative House Freedom Caucus are opposing Democrats’ attempts to increase discretionary spending despite a national debt of...