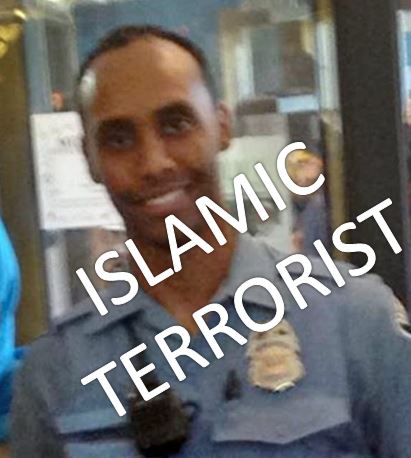 He was touted by the leftist mayors office a politically correct hire, being their first Muslim Somali officer. Records show that he shouldn’t have been passed in the Academy or the Field Training program but he was “untouchable” because of pressure from the mayors office, this affirmative action hire could not be touched.

The Muslim officer had documented issues with women, surprise, surprise for a Somali. Never should have been a Police Officer.

Police work is a difficult and dangerous job, and I almost never criticize a tactical decision by an Officer in the moment and few Officers do.  However, this Muslim officer had his gun out PRIOR to any “showing of fear” by his partner”. Then he reaches across his partner and shoots at an unknown object through the open window. Now the facts are that the call did not call for having your gun out of it’s holster while driving down an alley. It simply wasn’t that type of call.

Notice there was very little outcry about putting this Muslim Black guy in jail for shooting an innocent person compared to virtually every shooting of a Black drug dealer by a white officer? This shooting was way more grievous than any of those shootings period. Why? What was the difference in this case, why did the leftist support this murderer?

Sadly like parts of your country as well as France, Germany, and others, segments of America are also surrendering to Islam.

They are deliberately allowing as many Muslims in as fast as they can and then they fill up certain cities or states and take over the government and everything else. And they are on their way to creating no go zones before you know it even in America.

Damond called the police to report a possible assault down the alley behind her home.

When she went out to meet the police car in her pajamas, Noor reached over his partner and shot her dead.

Mohamed was the first Somali officer in his precinct.

Damond was shot and killed while wearing her pajamas and speaking to another police officer. Damond called 911 that night to report a possible assault in an alley behind her home on July 15, reports The Minneapolis Star-Tribune.

Noor’s partner was described as “stunned” by the shooting.

A couple weeks ago Mohamed Noor was found guilty of third degree murder and manslaughter for shooting Justine Damond (Ruszczyk).

Even though a jury convicted him, Mohamed Noor clearly an Islamic terrorist is seeking to overturn the conviction.

Muslim Cop Mohamed Noor Seeks to Throw Out Murder Conviction in Justine Damond Killing: Based on what? Sharia law? I believe if Justine was wearing a hijab, she'd be alive. https://t.co/zn3lAJmz5n pic.twitter.com/4X2JSqdWpY

There is nothing notorious about Israel’s Iron Dome unless you are a disappointed Palestinian terrorist. Not according to the Daily...