Unsurprisingly there has been a rash of media articles focusing on the 71st anniversary, not of Israel’s independence, but what Palestinians call the “Nakba” or “Catastrophe.”

Reuters’ contribution is “Gaza fisherman clings to dream of return to Jaffa home,” which reads like the typical emotion-ridden Palestinian plea for a “right of return” to villages, towns and cities left behind in 1948.

Looking out across the Mediterranean, the elderly Gaza fisherman sits on a bench adorned with just one word – Jaffa. 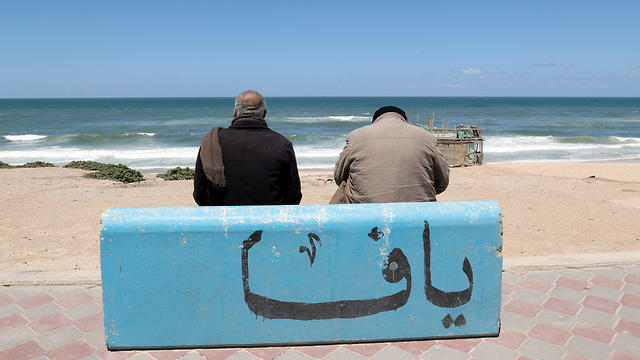 Mahmoud Al-Assi comes often to this blue bench. It is one of more than 120 such brightly-coloured concrete seats that line the Gaza seafront, each marked with the name of a town or village in Palestine, before Israel’s creation in 1948.

They bear the Arabic names for Beersheba (Bir as-Saba’), Acre (Akka), and Tel Aviv (Tal ar-Rabeea’) – all towns that now lie in Israel.

Like many of Gaza’s 1.3 million refugees, Assi, 73, visits the coastal benches regularly, as an emotional link to the towns their families left behind or were forced to leave.

Tel Aviv, however, was founded in 1909 as the first all-Jewish city in modern times. Since when did Palestinians have any connection to Tel Aviv?

The Arabic name for Tel Aviv used in the Reuters story is misleading. There was never an Arab town or village of Tal ar-Rabeea prior to 1948. That name is a literal translation of the Hebrew Tel Aviv, which itself means “hill of spring.” How did Arabic speaking Reuters journalist Nidal-al-Mughrabi not notice this discrepancy? In addition, Tel Aviv was not built on any Palestinian village – it was founded on sand dunes outside of Jaffa.

So either Palestinians themselves sitting on this blue bench are ignorant of the facts or they are not only interested in taking places that have some historical significance to them but also “returning” to places that were never theirs.

Either way, Reuters, by including Tel Aviv, allows its readers to falsely believe that Palestinians have some sort of claim on Israel’s second largest city, which is patently not the case.

Or has Reuters unwittingly uncovered a more sinister explanation for the beachfront benches – a Palestinian desire to take all of Israel.

Readers deserve a clarification from Reuters.

A BBC documentary, One Day In Gaza, examining the events of May 14, 2018, when tens of thousands of people...