To highlight the apparent threat male Muslim migrants pose to women in Germany, a political party has triggered many on both sides of the Atlantic by using an older painting in its campaign.

Painted in France in 1866 and titled “Slave Market,” the painting “shows a black, apparently Muslim slave trader displaying a naked young woman with much lighter skin to a group of men for examination,” probably in North Africa. 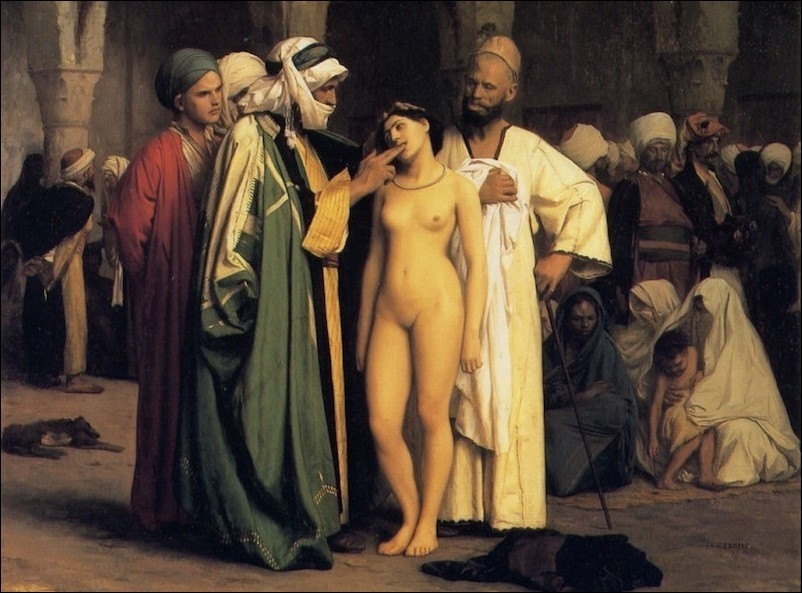 The Alternative for Germany party (AfD), founded in 2013 and first elected to Germany’s national parliament in 2017, has been putting up posters of the painting with the slogan, “So that Europe won’t become Eurabia.”

“We are strongly opposed to the use of this work to advance any political agenda,” objects Olivier Meslay, director of the Clark Art Institute in Williamstown, Massachusetts, which houses the original painting. He said his museum had written to AfD, “insisting that they cease and desist in using this painting.” Despite the rather legal tone, the painting is in the public domain; even Meslay acknowledges that “there are no copyrights or permissions that allow us to exert control over how it is used other than to appeal to civility on the part of the AfD Berlin.” 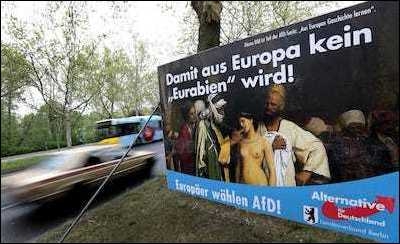 “So that Europe won’t become Eurabia.”

For its part, the AfD said the U.S. museum’s call is “a futile attempt to gag the AfD,” adding that “[t]he German public has the right to find out about the truth about the possible consequences of illegal mass immigration.”

Other elements in Germany are even more hostile to the AfD’s painting/poster: almost as soon as they are put up, every poster has been torn down, so that “party workers have had to repeatedly put up new copies, only to see them destroyed again the following night.”

What to make of all this? Objectively speaking, the “Slave Market” painting in question portrays a reality that has played out countless times over the centuries: African and Middle Eastern Muslims have long targeted European women—so much so as to have enslaved millions of them over the centuries (as copiously documented in my recent book, Sword and Scimitar: Fourteen Centuries of War between Islam and the West, from which the following quotes and statistics are derived).

The Muslim demand for, in the words of one historian, “white-complexioned blondes, with straight hair and blue eyes,” traces back to the prophet of Islam, Muhammad, who enticed his followers to wage jihad against neighboring Byzantium by citing its blonde (“yellow”) women awaiting them as potential concubines.

For over a millennium afterwards, Islamic caliphates, emirates, and sultanates—of the Arab, Berber, Turkic, and Tatar variety—also coaxed their men to jihad on Europe by citing (and later sexually enslaving) its fair women. Accordingly, because the “Umayyads particularly valued blond or red-haired Franc or Galician women as sexual slaves,” Dario Fernandez-Morera writes, “al-Andalus [Islamic Spain] became a center for the trade and distribution of slaves.”

Indeed, the insatiable demand for fair women was such that, according to M.A. Khan, an Indian author and former Muslim, it is “impossible to disconnect Islam from the Viking slave-trade, because the supply was absolutely meant for meeting [the] Islamic world’s unceasing demand for the prized white slaves” and “white sex-slaves.” Emmet Scott goes further, arguing that “it was the caliphate’s demand for European slaves that called forth the Viking phenomenon in the first place.”

As for numbers, according to the conservative estimate of American professor Robert Davis, “between 1530 and 1780 [alone] there were almost certainly a million and quite possibly as many as a million and a quarter white, European Christians enslaved by the Muslims of the Barbary Coast,” that is, of North Africa, the telling setting of the painting. By 1541, “Algiers teemed with Christian captives [from Europe], and it became a common saying that a Christian slave was scarce a fair barter for an onion.”

With countless sexually enslaved European women—some seized from as far as Denmark and even Iceland—selling for the price of vegetables, little wonder that European observers by the late 1700s noted how “the inhabitants of Algiers have a rather white complexion.”

Further underscoring the rapacious and relentless drive of the Muslim slave industry, consider this: The United States of America’s first war—which it fought before it could even elect its first president—was against these same Islamic slavers. When Thomas Jefferson and John Adams asked Barbary’s ambassador why his countrymen were enslaving American sailors, the “ambassador answered us that it was founded on the laws of their Prophet, that it was written in their Koran, that … it was their right and duty to make war upon them [non-Muslims] wherever they could be found, and to make slaves of all they could take as prisoners.”

The situation was arguably worse for Eastern Europeans; the slave markets of the Ottoman sultanate were for centuries so inundated with Slavic flesh that children sold for pennies, “a very beautiful slave woman was exchanged for a pair of boots, and four Serbian slaves were traded for a horse.” In Crimea, some three million Slavs were enslaved by the Ottomans’ Muslim allies, the Tatars. “The youngest women are kept for wanton pleasures,” observed a seventeenth century Lithuanian. 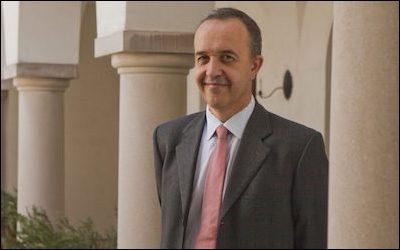 Though Gérôme’s painting is in the public domain, Olivier Meslay has demanded that AfD “cease and desist” from using it.

Even the details of the “Slave Market” painting/poster, which depicts a nude and fair-skinned female slave being pawed at by potential buyers, echoes reality. Based on a twelfth-century document dealing with slave auctions in Cordoba, Muslim merchants “would put ointments on slave girls of a darker complexion to whiten their faces… ointments were placed on the face and body of black slaves to make them ‘prettier.'” Then, the Muslim merchant “dresses them all in transparent clothes” and “tells the slave girls to act in a coquettish manner with the old men and with the timid men among the potential buyers to make them crazy with desire.”

In short, outrage at the Alternative for Germany’s use of the “Slave Market” painting is just another attempt to suppress the truth concerning Muslim/Western history—especially in its glaring continuity with the present. For the essence of that painting—Muslim men pawing at and sexually preying on fair women—has reached alarming levels all throughout Western Europe, especially Germany.

Note: The historic events, statistics, and quotes narrated above—and more like them—are fully documented in Raymond Ibrahim’s Sword and Scimitar: Fourteen Centuries of War between Islam and the West.

Raymond Ibrahim is a Judith Friedman Rosen Fellow at the Middle East Forum.

In Case You Missed It:  Why Wokeism Is A Religion
Posted in Terrorism and tagged Germany, Islam, Jihad, Liberalism, Muslims, Sex, Sex Trade, Slavery, Terrorism.

Rep. Ilhan Omar: Pro-Lifers are Hypocrites, Want to ‘Control Us’

(CNSNews.com) – Wading into the controversy over the passage of pro-life laws in red states, Rep. Ilhan Omar (D-Minn.) on...