The Federal Reserve Bank of St Louis just released this single snapshot of economic performance over the Obama years.

What do you see?

His eight years did more to destroy America than any of past presidents, be they Democrat or Republican.

Look and study these few charts: 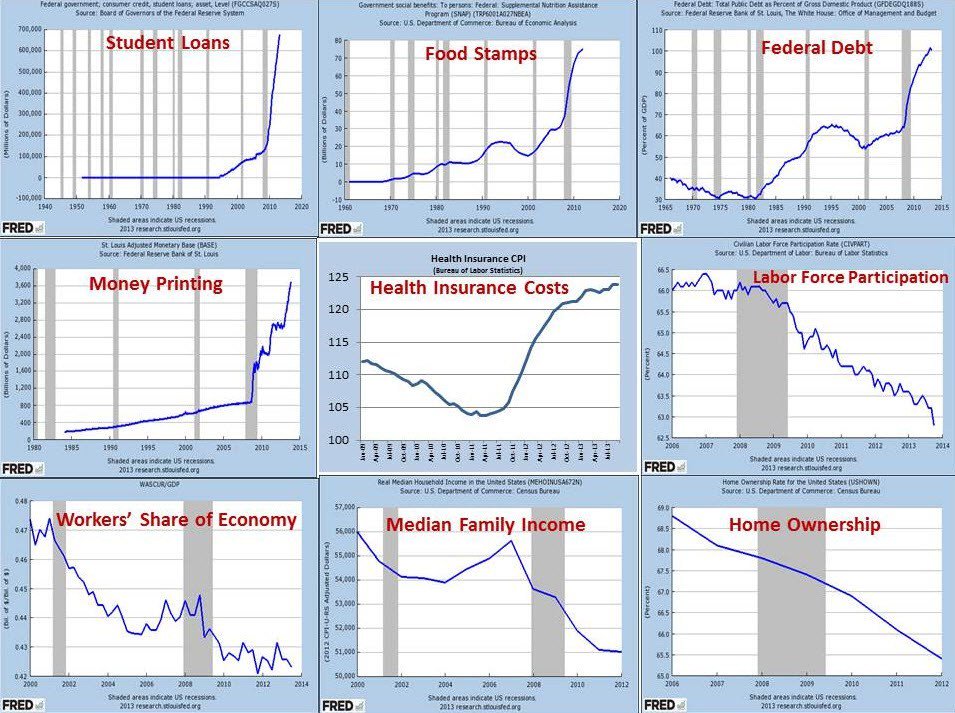 Student loans exploded and are a literal time bomb ticking away at he millennial generation.

Federal debt went through the roof as we added more debt than all other previous periods combined.

We printed lots of money to paper over the monetary effects.

Health costs went way up when we were told they would drop. Obama care was a flop.

Labor force participation went down as unemployment increased and many just dropped out of the workplace altogether.

Inequality went up and up, as the rich got richer and the middle class shrank.

Overall, Americans were far worse off than before and we were told there was NO hope.

The country was losing to China and our children and grandchildren would not live as well as their parents and grandparents had.

Now look at what has happened in the short years since Donald J. Trump was surprisingly elected President.

YOU CALL IT A TOTAL TURNAROUND.

Even the Clinton’s knew: “It is the economy stupid” that gets you reelected.

We cannot go back to Democrat or socialist economics.

Economic growth at 3% solves lots of problems and serves up a true wealth effect.

Which do you want?

Which does America deserve?

How College Students Really Feel About Free Speech on Campus

A new survey finding that college students generally support free speech also shows what for some is a worrisome divide...