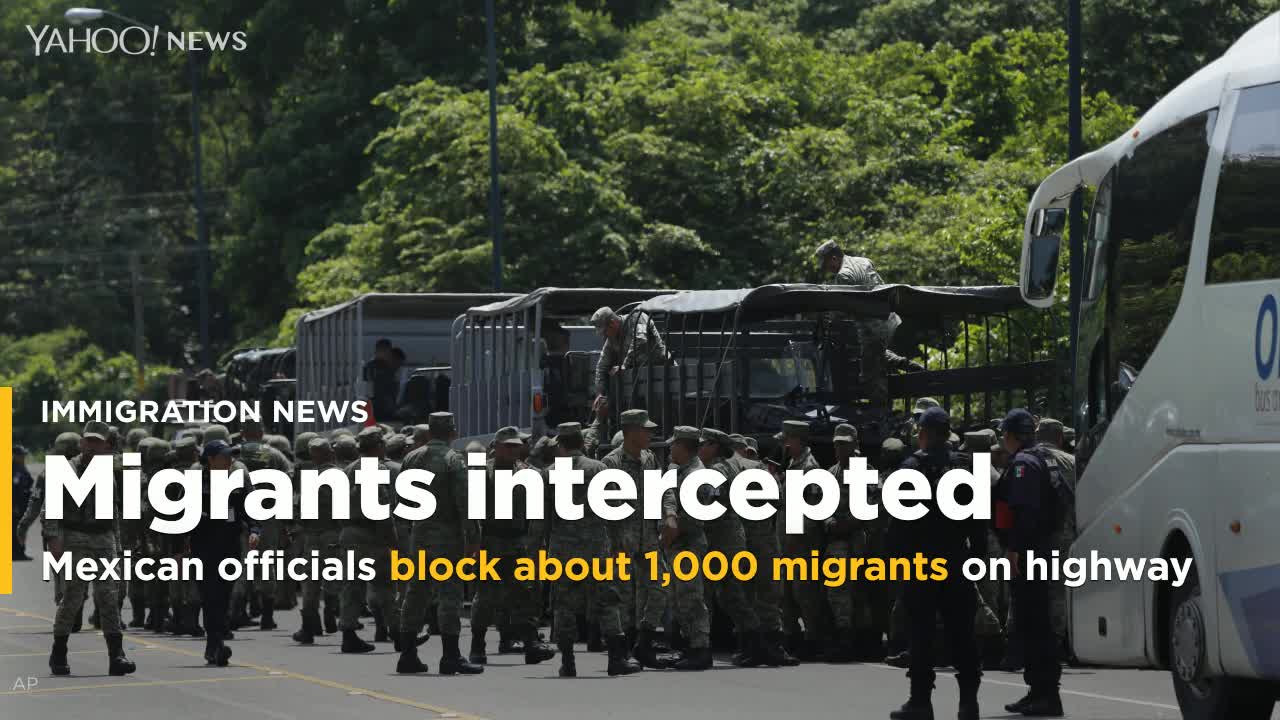 Trump’s threat to punish Mexico with tariffs seems to be working. Trump warned until Mexico to restrain the flow of Illegal migrants or tariffs will be charged on Mexican goods. The percentage can go from 5% all the up to 25%.

Trump has got the Mexicans over a barrel on energy, and if we want, we can wipe their economy out.  Without American energy imports, the Mexican economy collapses.

Mexican Soldiers and police forced hundreds of migrants in the group, which was mostly from Honduras  to a halt in the southern town of Metapa de Dominguez, about 12 kilometers (7.5 miles) from the Mexican-Guatemalan border.

The National Migration Institute (INM) said the  migrants had been stopped and taken to a detention center by bus.

But many others may have fled: state police initially estimated the caravan had some 1,200 people.

The incident came as a high-level delegation led by Mexican Foreign Minister Marcelo Ebrard held talks in Washington with US officials in a desperate bid to avoid Trump’s threatened tariffs.

Trumps tariffs has triggered panic in Mexico, which sends 80 percent of its exports to the United States.

The talks, which broke off Wednesday without agreement, are due to resume Thursday. Trump tweeted that if no deal is reached then, the tariffs will come into force Monday.

The INM said that where applicable, the detained illegal migrants would be “assisted to return to their countries of origin,” its a P.C term for deportation.

Tension flared as Mexican officers brandishing anti-riot shields blocked the invaders’ path, the activists said. But despite a shoving match, the authorities managed to force the caravan to a stop.

Separately, migrant rights group People Without Borders (Pueblo Sin Fronteras) said two of its members had also been detained: its leader, Irineo Mujica, in the northern state of Sonora, and another activist, Cristobal Sanchez, in Mexico City.

Mexico has finally deployed their National Guard to the southern border and stepped up detentions and deportations in a bid to slow the flow of migrants crossing its territory toward the United States.

Illegal immigrants detentions at the US-Mexican border still increased by 32 percent month-on-month in May, to more than 144,000, according to US Customs and Border Protection.

Tension has soared between the US and Mexico over the surge of illegal invaders in recent months — mainly Central Americans economic migrants fleeing poverty .

Looks like TRUMP finally got through to the Mexican Government, or they will be paying for his border wall through Tariffs.

Forty Years to the Resettlement of Beit Hadassah in Hebron

Forty Years to the Resettlement of Beit Hadassah in Hebron     by ARIEL NATAN PASKO   Just days after...