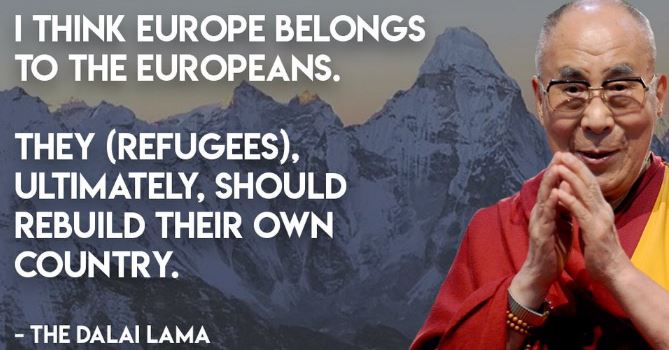 The Dalai Lama is concerned that Europe could become ‘Muslim or African’ if refugees who have been taken in are not then sent back to their home countries.

The Buddhist spiritual leader, who has been living as a refugee in India since fleeing Tibet in 1959, said only a ‘limited number’ of migrants should be allowed to remain.

During an interview with the BBC, the Dalai Lama added that refugees who have fled to Europe should be given skills before being returned.

He said Europe was under an obligation to take in those who needed help, but ultimately they should be returned to their homelands.

The 83-year-old said: ‘European countries should take these refugees and give them education and training, and the aim is return to their own land with certain skills.’

When asked what should happen to those who want to stay in their adopted countries, he replied: ‘A limited number is OK, but the whole of Europe [will] eventually become Muslim country, African country – impossible.’

It is not the first time the monk has made such comments. In a speech last year in Malmo, Sweden, the Tibetan Buddhist said refugees should return to help rebuilt their own countries.

He said: ‘Receive them [migrants], help them, educate them, but ultimately they should develop their own country. I think Europe belongs to the Europeans.’

The Dalai Lama, who is the spiritual leader of the Tibetan people, went on to say he admired the European Union as method of avoiding global conflicts and peaceful people needed in the world.

EU figures from last year state around 4.4 per cent of the bloc’s 512 million population are non-EU citizens.

The statistics said that 2.4 million migrants entered the EU from non-EU countries in 2017. There are thought to be around 70 million refugees worldwide.

The Buddhist monk has made India his home since fleeing the capital Lhasa in 1959 during the Tibetan uprising.

He set up a government-in-exile in Dharamsala in northern India and launched a campaign to reclaim Tibet from China, which gradually evolved into an appeal for greater autonomy – known as the so-called ‘middle way’ approach.

India, which granted him asylum in 1959, has supported the Tibetan leader but of late the government has maintained a distance, citing diplomatic sensitivities.

In 2015 he said that if he was succeeded by a female Dalai Lama she would have to be attractive, despite declaring himself to be a feminist.

Speaking to the BBC he again said while laughing: ‘If a female Dalai Lama comes, she should be more attractive.’

On international Women’s Day this year in March he called for more women to be given leadership roles instead of men who are ‘celebrated for killing their opponents’.

He posted: ‘Women have been shown to be more sensitive to others’ suffering, whereas, warriors celebrated for killing their opponents are almost always men.

(CNSNews.com) – Several of the Democrats running for their party’s 2020 presidential nomination gave a less than resounding endorsement during...