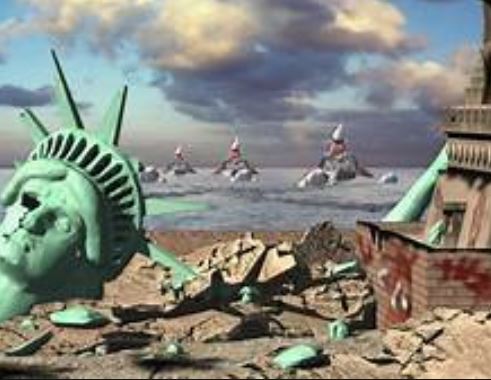 For two and half years, the media predicted that President Trump would be impeached, possibly jailed, once the special counsel wrapped up his investigation.  So when the Mueller report not only fails to charge the president, but exonerates him, a dazed media establishment reels from the news — Russian collusion was a hoax!

“The first thing dictators do is finish free press, to establish censorship.  There is no doubt that a free press is the first enemy of dictatorship.”  —Fidel Castro

Done!  Free press in America is dead.  We now have what the late Andrew Breitbart labeled a “Democrat Media Complex” (DMC), an imperium even more powerful than our government.

After all, media effectively control who serves in government, can play kingmaker or assassin with information they release or withhold.  Politicians know that a coordinated racism, sexism, or #MeToo charge can destroy the most powerful official, sink the most promising candidate.  Gaslighting is another tactic the press uses to sway election and suppress the vote.  Media release phony polls to make the Republican candidate appear a lost cause, the Democrat inevitable.

And our government can’t (yet) invade Americans’ homes, remove forbidden literature, and enforce state propaganda.  They can’t (yet) round up Americans and ship them to re-education camps to restrict information and block opposing views, to instill the progressive doctrine.  Yet the press can and virtually does all the above, a superpower, omnipresent, ever-present, and invincible

Omnipresent — Everywhere at once.  Today’s media reach into every home, car, workplace, school, airport, anywhere there’s a TV, internet, or a phone.

Ever-present — Always here — 24-hour news, our daily paper, hourly reports on radio and internet, media are in our ears, dusk to dawn.

Invincible — Safely ensconced behind the very Constitution they seek to eradicate, the media are untouchable.

These weaponized media attack America from within spiritually and morally; divide us by race, sex, and religion; and transmute American culture.

Yet millions of Americans, men and women, demand the right to take out a contract on their own children, to pay a third party (doctor) to do the wet work.

In 2014, networks reported that an unarmed black man, Michael Brown (the gentle giant), was shot in the back by a white cop while trying to surrender.  Investigators later found that Brown, the 6’5″, 289-lb. raging bull, was charging when shot in the front, not back.  But the exculpatory evidence came too late; the lie stuck.

To this day, black activists wear t-shirts with “Hands Up/Don’t Shoot” logos, and NFL players “take a knee,” opposing their own flag, anthem, and country to protest the fake news from Ferguson, Mo.

Eradicate Our Culture/Strip Our Identity:

The press elevates the trans agenda (men who “identify” as women are women despite anatomy; ditto for women who think they’re men).  Any who “misgender” the man, woman, or child may become a social outcast, lose his job, or even bejailed for refusing to participate in the delusion.  And yes, it’s delusional.  Yet media are so influential that they convince people to deny reality, validate the fiction, and share in the psychosis.

This staggering power is used to weaken our country, to prepare America for surrender.  The media use loaded language to push “sensible gun laws” (gun control), “comprehensive immigration reform” (open borders), “Medicare for all” (socialized medicine), “women’s reproductive health” (abortion), and “popular vote” (extraconstitutional elections.  Their cleverly worded arguments convince Americans to stand down while the Left chips away at our Constitution, to willingly disarm and passively surrender our independence.

To allow this enemy press to take asylum in the Constitution is like giving Satan sanctuary in a church.  Both despise the very institution that gives them safe harbor, will not stop until it is burned to the ground.

These traitors are able to preach sedition and advocate the overthrow of our president because they claim the sanctity of free press, but also because they’re firing on us from within our ranks.  The enemy is within the gates, a trusted friend, one of our own.

“The traitor moves amongst those within the gate freely[.] … For the traitor appears not a traitor; he speaks in accents familiar to his victims, and he wears their face and their arguments[.]”  —Marcus Tullius Cicero

But they’re not one of us, not patriots, not even loyal Americans.  They loathe our country, despise our people, and abhor our Constitution.  They use psychological weapons (psyops, propaganda, thought control, and Alinsky’s Rules for Radicals) against their own people.

American patriots in the Revolutionary War and soldiers throughout our history fought bloody battles to establish and defend our freedom.  They were attacked by fierce enemies with swords, guns, cannons, and bombs, were tortured, maimed, and killed in defense of our liberty.  They gave their lives, sacrificed their futures to preserve a free country for those who would come behind them.

Now our freedom is slipping away — not taken at gunpoint or lost in bloody wars, but surrendered to arguments, defeated by rhetoric, talked out of liberty.

We owe it to those who came before us and those who will come after us to defeat this most dangerous enemy, to fight with every ounce of our being.

“I have sworn upon the altar of God, eternal hostility against every form of tyranny over the mind of man.” —Thomas Jefferson

The clock is ticking.  Our Republic is at stake.

In Case You Missed It:  In a world dominated by mass DELUSION, the truly sane seem like outcasts
Posted in Freedoms and tagged Freedom.

The Democratic Candidates Are in a Bubble on Immigration