A swimming pool in the German town of Kehl had to be shut down early by police after a group of 50 invading North African migrant youths caused havoc among the bathers, and the German people have had enough of these attacks, rapes, robberies and terror attacks. 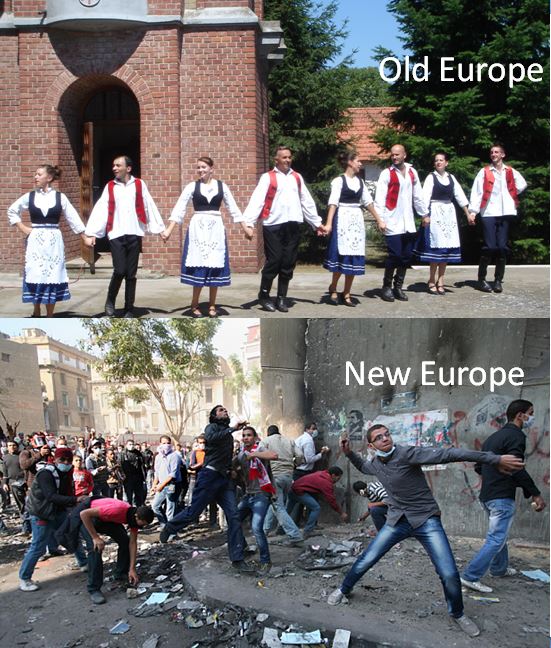 Native White German resistance to the Third World invasion of that country is at an all-time high, and invader centers are being confronted by patriots at the rate of one every two days, according to newly-released official figures. Germans are finally standing up the massive invasion of their country.

According to the latest report issued by the Federal Office for the Protection of the Constitution (“Verfassungschutz,” or BfV) titled “Verfassungsschutzbericht 2018,” the Federal Criminal Police Office (BKA) reported that the number of confrontations carried out by Germans against invaders and those supporting the invasion rose by 3.2 percent.

In addition, the number of violent assaults resulting in bodily injury rose by seven percent.

The report, which describes anyone who opposes the Third World invasion as a “right wing extremist,” said that there were six cases of “attempted homicide which were motivated by the mass influx of invaders.

In addition, the “number of violent patriotic offences rose by 6.1 percent to 821 (2017: 774),” and although confrontations on invader centers fell to 164, this was only just below those registered in 2014, when 170 such attacks were recorded. This translates to one attack every two days.

The report also said that in 2018, 776 “extremist” offences were attributed to “Reichsbürger” (“Reich citizens”) and “Selbstverwalter” (“Self Administrators,” or secessionists) members. Of these, 160 crimes (2017: 130), chiefly blackmail (98) or resistance to law enforcement officers (39). Coercion and threats also accounted for a considerable number of offences (177).

Nationwide, the number of Reichsbürgers and Selbstverwalters is increasing: in 2017, a total of 16,500 members were registered for both groups.  In 2018, the number increased to 19,000, of which 950 are also classified as “right-wing extremists.”

The report also dealt with crimes committed by left-wing extremists and said that the decline in registered offences from that camp was attributable to the sharp rise associated with the G20 summit in Hamburg in July 2017.

“Most left-wing extremist violent crimes were committed in North RhineWestphalia (446) – more than double the number for 2017 in that federal state. These offences were largely committed in connection with the climate protests in the Hambach Forest,” the report said.

In addition, the report said that the “number of extremist offences categorized as politically motivated crime – foreign ideology” came to 1,928.

“This very sharp rise of 62.4 percent was mainly attributable to nationwide protests—mostly by PKK members—against the Turkish military offensive in northern Syria.” (The PKK is the Kurdish Communist Party which has a strong presence in Germany thanks to decades of pro-Third World immigration policies pursued by successive German governments).

In addition to this, at least 300 of the approximately 1,000 Muslims living in Germany who went to fight for ISIS in Syria and Iraq have already returned to Germany.

These returnees are “a high security risk,” and imprisonment means little as “radicalization continues in prison” and “resocialization is rare.”

The report said that there are at least 26,560 “Islamists Terrorist” in Germany.

The idiom “divide and conquer”  originated with the Latin maxim “divide et impera” meaning divide and rule. This is the leftist tool to divide us into the groups and create conflict. Mass migration is also a tool used by the left to divide us.

This is a leftist protocol for the lefts retention of power by utilizing a deliberate strategy of causing those in subordinate positions to engage in conflicts with each other that weaken and keep them from any unified effort to remove the status quo force from power.

In Case You Missed It:  Biden promises that your tax dollars will be used by HHS to transport women across state lines for baby killing... "abortion Uber"
Posted in Freedoms and tagged Europe, Germany, Jihadists, Migrants.

A violent brawl broke out in front of the White House on Thursday after Fascist Communists burned an American Flag...