“I called for an investigation into Elliott Broidy’s actions surrounding President Trump’s inauguration last year. Now a real investigation is happening. This is exactly why I’m fighting to end corruption in Washington,” Warren tweeted Monday.

Red State points out that Mr. Broidy has not been charged, let alone convicted, of any crime related to the democratic senator’s allegations. Moreover, Broidy, an American citizen who is actively engaged in foreign policy, is a staunch supporter of the state of Israel. Warren, on the other hand, has become a staunch advocate for policies that harm Israel.

Mr. Broidy and Sen. Warren’s most influential backer, democratic mega-donor Paul Egerman, are at great odds over Israel policy. Egerman, who is also the senator’s 2020 campaign treasurer, is an advisory council member to the controversial leftwing group J Street, which claims to be “pro-Israel, pro-Peace,” yet the group provided cover for the Obama Administration’s anti-Israel agenda.

In addition to the Democratic anti-Israel mega-donor controlling her campaign coffers, Warren has hired a Hamas apologist and anti-Israel fanatic on her campaign staff. The anti-Israel activist, Max Berger, is the co-founder of a group that endorses the Boycott, Divestment, and Sanctions (BDS) movement, which seeks an end game that results in the destruction of the Jewish state.

The latest Warren hire has sent shockwaves across the Jewish and pro-Israel advocacy world. “Anyone who wants to be friendly with Hamas has no business being in a presidential campaign,” Rabbi Abraham Cooper of the nonpartisan Simon Wiesenthal Center told the Washington Free Beacon in comments this week. 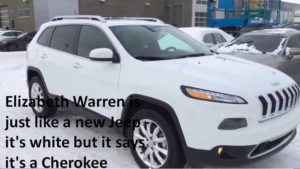 “If that’s the message that Elizabeth Warren wants to send to Jewish progressives and the rest of the American Jewish community, that the person she put in charge of outreach wants to be friends with Hamas, no way,” Rabbi Cooper added.

The situation draws parallels to the Obama Administration using extrajudicial means through the U.S. intelligence community to illegally spy on then-candidate Donald Trump and his associates. Former intelligence officials have justified their extreme behavior by pointing to the president’s supposedly alarming foreign policy posture as if that alone was enough to justify their espionage campaign. Would a President Elizabeth Warren use the same rationale if her seemingly politically-motivated investigation against Broidy were to come up empty?

Sen. Warren insists that she is “fighting to end corruption in Washington,” but the rhetoric and policy proposals coming from the Democratic presidential candidate tells a very different story. Warren has effectively moved the political goalposts to such an extent that she is openly pursuing political witch hunts against her ideological and policy rivals.

Trump to Lean on Social Media Giants to Curb Censorship

President Donald Trump, during a free-wheeling speech Thursday, said he would be bringing top social media executives to the White...