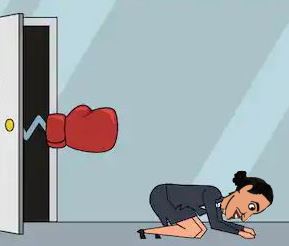 Following the public catfight between House Speaker Nancy Pelosi and a can’t-stop-mouthing-off Alexandria Ocasio-Cortez team over casually hurled claims of racism, Democrats aren’t about to just let the whole thing go and “try to do better” next time.

Apparently, the longtime machine pols of the outer boroughs of New York City are being activated. Jurassic Rep. Gregory Meeks, of Queens, an 11-term congressman, put Ocasio-Cortez on notice that she, too, could be in line to get primaried. She wants to play Robespierre on the Dems, she can wind up like him on the guillotine, too.

According to the New York Daily News:

Queens Democratic boss and 11-term congressman Greg Meeks took a thinly-veiled jab at fellow Big Apple Rep. Alexandria Ocasio-Cortez on Friday, urging her to back off her racially-tinged feud with party leaders or face a fight for her political life.

In an interview with the Daily News, Meeks fumed over Ocasio-Cortez’s recent racial beef with House Speaker Nancy Pelosi and pushed back against her left-wing allies at Justice Democrats for openly backing insurgent candidates trying to unseat members of the Congressional Black Caucus.

He also said the CBC can play the same game.

“Primaries go two ways,” Meeks said when asked whether his wing of the party would consider challenging progressive members next year, including Ocasio-Cortez. “If someone picks a fight with somebody else, you fight back. That’s what my parents told me.”

Meeks stressed there weren’t any current plans to challenge Ocasio-Cortez, but left the door open: “If you get in the ring, expect that people are going to start throwing punches.”

So very Queensy: Nice political office you’ve got there, Sandy. Be a shame if anything should happen to it…

With remarks like that, it’s pretty obvious that these Democrats want to get rid of her.

And why not? She’s no asset to their team. She’s not only offended Pelosi, she’s pissed off the entire Congressional Black Caucus. She’s infuriated blue congresspeople in red districts, such as Native American congresswoman Sharice Davids of Oklahoma. She’s also got no local friends. The Daily News reports that she’s trying to get Reps. Yvette Clarke, Eliot Engels, and Hakeem Jeffries, all lNew York City Democrats, primaried, as well as other black members of the Congressional Black Caucus elsewhere. She’s even annoyed Mayor Bill de Blasio, who worked hard to get Amazon to place its headquarters in Ocasio-Cortez’s district, only to see her flippantly chase them off, with Amazon making it clear that she was the reason for the pullout. She’s burned through potential allies like a leftist burns through public funds.

Meeks explained what he and his ally Pelosi are trying to do in politics and it’s a perfectly sensible plan regardless of political perspective.

“I would hope that these individuals would realize who the opposition is here,” Meeks said, referring to Republicans. “The focus should be to keep the majority, grow the majority and win the presidency.”

Is there any single element anywhere in there where the racism-hurling Ocasio-Cortez acts as an asset? Can she help keep the majority when so many voters despise her? Can she help grow the majority now that voters and even Democrats have had a bellyful of her ilk? Can she help a Democrat win the presidency? She’s a walking ad for the opposition and President Trump can’t stop snickering.

Meeks’s warning is clearly a signal that the long knives are out and the money is amassing. Either Ocasio-Cortez shapes up or word is out now from the Democratic machine pols: She’s going to be shipped out.

How Imperial Socialism Shattered the Roman Empire and Led to Feudalism

Socialism isn't new; it was even wrecking economies back in Ancient Rome. In years of peace, Roman emperor Diocletian, with...