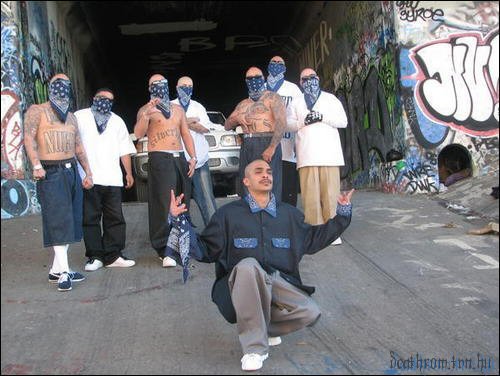 Democrats want the borders wide open, drugs, cartel members, child sex trafficking and gangs walk in as they please. Due to the open border sanctuary policies 22 members of the violent El Salvadoran gang MS-13 were charged with enforcing a criminal racketeering enterprise by murdering people in ‘medieval style’ killing sprees.

A 12-count indictment was handed down Monday by prosecutors in Los Angeles who charged the MS-13 gang members with killing 7 people with machetes.

A rival gang member was dismembered and his heart cut out of his chest and thrown into canyon in Los Angeles.

Los Angeles prosecutors say that MS-13 has recently grown and become more powerful due to an influx of Central Americans into California through our porous borders.

“Taking violent offenders off the street should send a message to MS-13 members and their associates that medieval-style violence and senseless murder will not be tolerated in Los Angeles,” Paul Delacourt, assistant director in charge of the FBI’s Los Angeles office, said in a written statement.

Court documents say that younger associates of the Fulton clique who want to become full-fledged MS-13 members were required to kill a rival gang member or other adversary to gain initiation.

Among the murders detailed in the indictment is that of a rival gang member who was abducted and hacked to death on March 6, 2017 in a remote area of the Los Angeles National Forest by MS-13 members who believed he had defaced their graffiti.

The victim was dismembered, his heart cut from his chest and thrown into a canyon with other body parts, according to court papers.

Other slayings were also carried out with machetes, knives or baseball bats in the national forest or Malibu hills, prosecutors say. In addition to the murder charges, many of the 22 MS-13 members named in the indictment were charged with racketeering and conspiracy.

Among those charged were the accused leaders of the Fulton clique, Angel Amadeo Guzman, also known as “Splinter” or “Desastre,” Edgard Valasquez, known aka “Snoopy” and Walter Chavez Larin, aka “Delito” or “Dexter.”

Los Angeles is a sanctuary city where illegal aliens run wild in the streets without fear of deportation.

The Democrats give dangerous MS-13 gang members cover while they hack people to death and force teenage girls into prostitution and sex trafficking.

Alpha News from Minnesota released Part I of their Ilhan Omar investigation tiled “The Secrets of Ilhan Omar” on Tuesday. The shocking video...