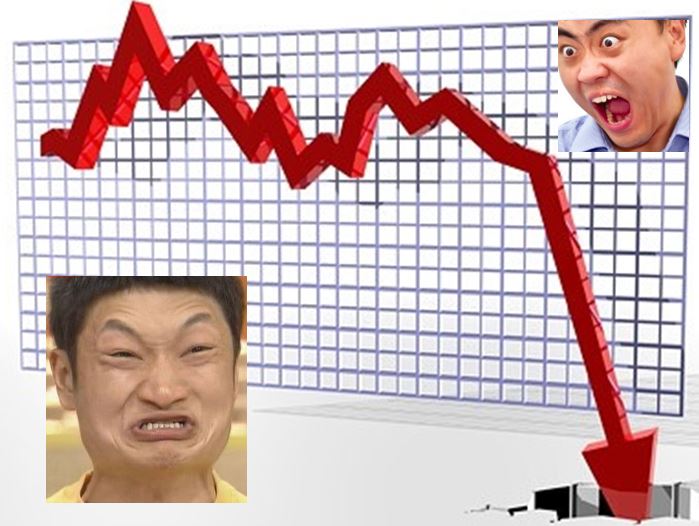 While the western world (and much of the eastern) has been preoccupied with predicting the consequences of Trump’s accelerating global trade/tech war and whether the Fed will launch QE before or after it sends rates back to zero, Beijing has quietly had its hands full with avoiding a bank run in the aftermath of Baoshang Bank’s failure and keeping the interbank market – which has been on the verge of freezing – alive.

Unfortunately for the PBOC, Beijing was racing against time to prevent a widespread panic after it opened the Pandora’s box when it seized Baoshang Bank, the first official bank failure in an odd replay of what happened with Bear Stearns back in 2008, when JPMorgan was gifted the historic bank for pennies on the dollar.

And with domino #1 down, the question turned to who is next, and could it be China’s Lehman.

As a reminder, back in May, shortly after the shocking failure of China’s Baoshang Bank (BSB), and its subsequent seizure by the government – the first takeover of a commercial bank since the Hainan Development Bank 20 years ago – the PBOC panicked and injected a whopping 250 billion yuan via an open-market operation, the largest since January. Alas, as we said at the time, it was too little to late, and with the interbank market roiling, with Negotiable Certificates of Deposit (NCD) and repo rates soaring (in some occult cases as high as 1000%) we said that it’s just a matter of time before another major Chinese bank collapses

And, in order to present the list of the most likely candidates, will picked those names that – just like Baoshang – had delayed publishing their latest annual reports, the biggest red flag suggesting an upcoming solvency “event.” The list is below.

We were right, because not even two months later, the second biggest bank on the list, Bank of Jinzhou has crawled in Baoshang’s foosteps and is about to be seized by the government.

According to Reuters and Bloomberg, Bank of Jinzhou recently met financial institutions in its home Liaoning province to discuss measures to deal with liquidity problems, and in a parallel bailout to that of Baoshang, the bank was in talks to “introduce strategic investors” after a report that China’s financial regulators are seeking to resolve its liquidity problems sent its dollar-denominated debt plunging.

Oncologists Are Freaking Out After True Cause of Cancer Is Released

Oncologists Are Freaking Out After True Cause of Cancer Is Released

Officials including those from the People’s Bank of China and China Banking and Insurance Regulatory Commission recently held a meeting with financial institutions in Bank of Jinzhou’s home province of Liaoning to discuss measures to resolve the lender’s liquidity issues, Reuters reported Wednesday.

In response to market fears the bank issued a statement on Thursday that “currently, Bank of Jinzhou’s business operations are normal overall,” which however did not refer to its liquidity situation. “Recently, the bank’s board of directors and some major shareholders have been in talks with several institutions that wish to and have the ability to to become strategic investors” adding that talks have been “going smoothly.”

By strategist investors it of course meant banks, backstopped by the government, who would “absorb” the bank, effectively nationalizing it a la what happened with Baoshang. The only question is whether stakeholders would also be impaired.

As we reported in June, Jinzhou’s Hong Kong-listed shares have been suspended since April after it failed to disclose its 2018 financial statements; adding to its woes, its auditors Ernst & Young Hua Ming LLP and Ernst & Young resigned. As the bank – which first got in hot water in 2015 over its exposure to the scandal-ridden Hanergy Group – wrote in a filing on the Hong Kong Stock Exchange, E&Y was first appointed as the auditors of the Bank at the last annual general meeting of the Bank held on 29 May 2018 to hold office until the conclusion of the next annual general meeting of the Bank. That never happened, because on 31 May 2019, out of the blue, the board and its audit committee received a letter from EY tendering their resignations as the auditors of the Bank with immediate effect.

The reason for the resignation: the bank refused to provide E&Y with documents to confirm the bank’s clients were able to service loans, amid indications that the use of proceeds of certain loans granted by the Bank to its institutional customers were not consistent with the purpose stated in their loan documents.

As a result, “after numerous discussions and as at the date of this announcement, no consensus was reached between the Bank and EY on the Outstanding Matters and the proposed timetable for the completion of audit.” At this time, the bank also requested the trading in the H shares (which was frozen on April 1) on The Stock Exchange of Hong Kong Limited to be suspended until the publication of the 2018 Annual Results, which will likely never come.

There is another reason why this particular failure is notable: Bank of Jinzhou is the second-most reliant on interbank financing, particularly non-bank financial institutions’ deposits, among more than 200 local banks, according to UBS analyst Jason Bedford said when reached by phone on Thursday.

Which explains its failure: just last month we reported that China’s interbank market, especially for smaller banks, had effectively frozen. It was therefore only a matter of time before other banks reliant on it for funding threw in the towel, as Jinzhou has now done. To wit, Jinzhou’s Its dollar-denominated loss-absorbing debt instruments, known as AT1 bonds, plunged near all time low… 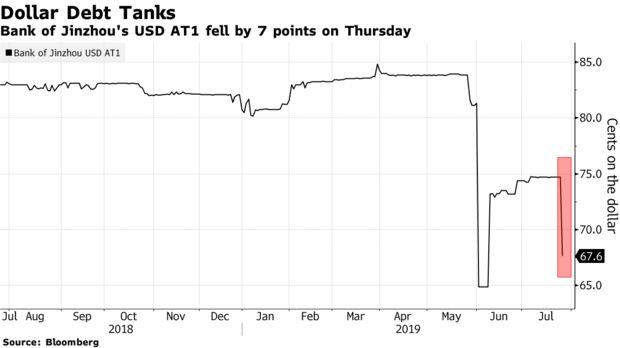 … while the bank’s seven negotiable certificates of deposits – which would be taken over by another, bigger bank when (if) the bank is seized and bailed out, were indicated at yields ranging from 3%-5.5% on Thursday, higher than valuations of 2.8%-3.45%.

Incidentally, back in early June when first reporting on the resignation of the bank’s auditors, we said that “the real question facing Beijing now is how quickly will Bank of Jinzhou collapse, how will Beijing and the PBOC react, and what whether the other banks on the list above now suffer a raging bank run, on which will certainly not be confined just to China’s small and medium banks.”

The answer: less than 2 months.

Unfortunately for China, it won’t stop there. As a reminder, China’s smaller lenders have been under growing scrutiny since Baoshang Bank’s failure and takeover which led to a sharp repricing of risk for much of China’s banking system which had long operated under an assumption that policy makers would support firms in trouble.

“We expect the regulators to step up their support if more financial institutions run into liquidity issues,” said Becky Liu, head of China macro strategy at Standard Chartered Plc, who declined to comment directly about Bank of Jinzhou. “Over time, the cost of funding between the stronger and weaker financial institutions will see further divergence.”