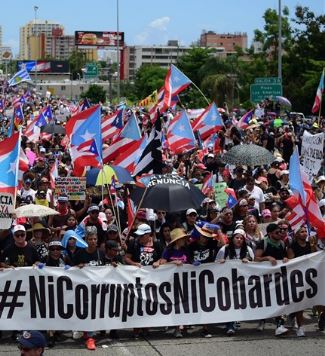 Well, it’s finally happened. Puerto Rico’s arrogant, condescending, deplorables-deploring governor, who got caught sending disparaging messages about Puerto Rican hurricane victims on a bulletin board limited to just his inner-circle cronies, is on his way out.

He’s the first Puerto Rican governor to be thrown out this way, and the 500,000-strong protests on the tiny island that led up to it were, to say the least, Venezuela-sized, except probably more proportionally.

What led to this state of affairs? Same thing that led to Venezuela’s meltdown: Socialism. Puerto Rico went bankrupt in 2016 based on socialist overspending and had to be bailed out by Uncle Sam. The refusal to live within means led to an embarrass federal “oversight board’ and a program called PROMESA, which sounds like a U.S.-style IMF austerity program. The only reason such a thing could happen is that the local government couldn’t be trusted not to adhere to double-entry bookkeeping. Since the party in power — called the New Progressives — were on the leftside, favoring statehood with the U.S. to help elect Democrats — a bailout would have otherwise meant that they’d just go on spending like Hugo Chavez, offering free stuff to their friends for in exchange for votes. And if statehood were achieved, they’d have access to much more of the cash.

Didn’t work that way. That bankruptcy and its after-effects have made life miserable for Puerto Ricans. The country was struggling under a $74 billion debt heap with an additional $50 billion in unpaid pensions. To pay the debts, the roads, the schools, the services went to heck. As a result, people started to leave, eroding the tax base even further. As many as 700,000 fled to Florida and beyond between 2010-2016. The ugly emails from the governor, effectively calling the remaining Puerto Ricans deplorables for complaining, were just too much.

These stories in the New York Times show how bad it was for the very people getting insulted in private by their governor. Here’s one and the Times has a ton of them:

Where I live, they pick up the garbage every two or three weeks and there is no debris collection whatsoever. When someone wants to dispose of an old refrigerator, they dump it on the side of a road because if they put it in front of their house, months will go by and no one will pick it up, no matter how many times you call.

After Hurricane Maria, the main roads were partially fixed because of federal funds, but municipal roads are not being fixed at all unless you have someone with political influence living in the area. My husband and I started to fix the potholes with concrete because the road to our house is becoming impassable.

The anger and frustration is everywhere. Sometimes I wonder what will happen if it really gets out. The protests against Mr. Rosselló have been nothing compared to what could be.

Who is Rossello, who resigned? As I noted earlier, he’s a Clinton man, he learned his politics at the Clintons’ knee, and later went on to serve as a Democratic delegate for getting Hillary Clinton her nomination. So lay this one down at the feet of the Clinton machine.

Clintonism and austerity do not mix, which is why Rossello got so unpopular. Clinton himself was a spender, but not a big spender because he had a Republican Congress to keep him honest. But abroad, Clintonism was always a different story. It was about making the people pay for their government’s spend-happy profligacy, via IMF austerity programs, while giving them nothing in return. Austerity alone, without any free market improvement to boost the economy, is an utterly miserable way to live. I recall well how Bill Clinton foisted IMF-austerity on countries such as Indonesia in 1998, while sneakily plotting with his leftist buddies to thwart authentic free market reforms (in this case, a currency-stabilizing currency board) that would have allowed the country to grow out of its debt heap and keep people employed, with far less pain. Steve Hanke’s piece on how that went down is a must-read. Asia Times’s grizzled old correspondent, John McBeth, has one about it, too. Zero free market reforms and a choke on state spending are awful. As an added insult, Clinton was always billed as “neo-liberal” and pro-capitalist, which has since turned out to be a useful foil for the left.

In Puerto Rico’s case, the free market reform that needs to be done is getting rid of the Jones Act, a godawful piece of legislation done to placate U.S. unions, which requires all shipping to be done by American ships, which has hit Puerto Rico unusually hard. Its effects on the island economy drive up costs, for instance, driving up the cost of a car in San Juan by about $6,000. That’s doubly disgusting, given that Puerto Rican incomes are not as high as those of the mainland U.S. So far, nothing is being done.

I can’t say for sure how this scenario is going to turn out next — the governor who will replace Rosselo, Lieutenant Governor Wanda Vazquez, who is from the same political party as Rossello, appears to be a political hack.

Alexandria Ocasio-Cortez is claiming this ouster as her victory. Kind of a Bernie Sanders-over-Hillary Clinton redux, and something that ought to make Puerto Ricans cringe.

This is a triumph for the people of Puerto Rico.

Through unprecedented direct action, they successfully changed their leadership and demanded accountability.

PR made history, and began carving a path for the future. https://t.co/d99mTY0Lez

The hideously Trump-hating mayor of San Juan, Carmen Yulin Cruz, says she’s planning to run for governor in 2020, obviously seeing her opportunity. Don’t count on any free market reforms from her.

People complaining in the New York Times piece say their uprising was about getting rid of the PROMESA and oversight board. Understandable, but if the solution is to get Uncle Sam to pay the debts and go on spending, not gonna work unless Democrats can defeat Trump.

There’s definitely a danger that the situation can switch even further leftward, which would have to be into Hugo Chavez territory.

Who is to be the powerful advocate for the free market reforms that Puerto Rico needs instead?  One can only hope there will be one. As of now, Clintonism stands discredited and it ought to be all of socialism, too.

BREAKING: What may be millions of water bottles. meant for victims of Hurricane Maria, have been sitting on a runway in Ceiba, Puerto Rico, since last year, according to @FEMA, which confirmed the news to me, late tonight, after pictures, posted today on social media, went viral. pic.twitter.com/jidGJAvCyJ

The Three Weeks: Ilhan Omar and Rashida Tlaib, Mourning Or Redemption?   by Ariel Natan Pasko   Has the...