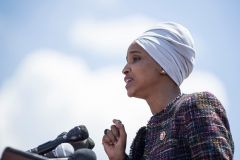 Imbecilic bigot Rep. Ilhan Omar (D-MN) claimed in a recently resurfaced interview on Qatari propaganda network Al Jazeera that Americans should be “fearful” of white men who are “causing most of the deaths within this country.” These racist and blatantly false comments came in response to a question about Islamophobia. The interviewer asked if Islamophobia might be the result of a reasonable fear people have about Islamic terrorism. Omar could have responded that we shouldn’t fear anyone based on race, ethnicity, or religion, and that each person should be judged according to his or her own merits — but instead, she took the opportunity to fear monger about the dreaded white man.

“I would say our country should be more fearful of white men across our country because they are actually causing most of the deaths within this country,” Omar said. “And so if fear was the, the driving force of policies to keep America safe — Americans safe inside of this country — we should be profiling, monitoring, and creating policies to fight the radicalization of white men.”

I am sure the media will now hound every Democrat to denounce this statement as racist. Right? https://t.co/UewkblF8Oo

It goes without saying that any white politician’s career would be over and his reputation destroyed (rightfully so) if he ever uttered a phrase like “we should be more fearful of brown men” or “we should be fearful of black men.” Even if Omar’s statistical claims were correct, she would still be an irresponsible, race-baiting bigot for advocating fear of an entire race. But, as it happens, her claims are not correct. They are not even close to correct. She is not only fear mongering — she is fear mongering with phony statistics.

I will be reasonable and assume that Omar didn’t intend to be taken completely literally. The leading causes of death in America are things like heart disease, cancer, and diabetes. Is she suggesting that these illnesses have been engineered by the evil white man? I wouldn’t put it past her, actually, but I’ll be more generous than that. Let’s read “causing death” as “murder.” Is is true in that case? Do white men do most of the murdering in this country?

Again, not close. According to the Department of Justice, white people (not just men) commit about 45% of the murders in the U.S. That seems high until you consider that white people are over 60% of the population. Whites are therefore underrepresented in the homicide department by about 15%. Blacks commit a little over 50% of the murders in America, despite accounting for only 13% of the total population. Those are the simple facts of the matter. Facts cannot be racist. Lies can be racist. Conclusions can also be racist. Ilhan Omar took a racist lie (that white men cause most of the deaths in America) and drew a racist conclusion (that we should therefore fear white men). It’s a racism double whammy, of sorts.

But maybe we could be even more generous to Omar. Maybe we could give her the benefit of the doubt, even though her own statements and history show that she does not warrant such charity. Maybe we could assume that she meant her “white men cause most of the deaths” assertion to apply only to terrorism. It is often claimed, and not just by Omar, that white people are responsible for most of the domestic terrorism in America. The most common source cited for this claim is a 2017 Government Accountability Office report that found that more people have been killed by right-wing terrorists than by Islamic terrorists. How did they arrive at that conclusion? Here’s a relevant passage from the report:

In order to make “far-right violent extremists” the deadliest, one has to compile his aggregate numbers beginning on September 12, 2001. That seems an oddly specific date. Why not start on January 1, 2001? How about January 1, 2000? Isn’t it easier and cleaner to look at the numbers over the past 20 years, since the beginning of the new century? Well, the reason for starting on September 12, 2001 is obvious — it excludes the deadliest terror attack in American history, which was carried out by Islamic extremists. In other words, if we arbitrarily ignore the 3,000 people radical Islamists killed in one day, then Muslim terrorists have recently killed fewer people than have right-wing extremists. This is a bit like tabulating the total number of people drowned in shipwrecks except for anyone who happened to drown on April 15, 1912.

If you want to know about shipwrecks, it seems the Titanic ought to be a prominent part of that analysis. Similarly, any analysis of terrorism in the United States must obviously include the most devastating terror attack this country has ever experienced. But here’s the kicker: Even if you did begin your tabulation on September 12, 2001, deaths by Islamic terrorism still dwarf all other categories because over 1,000 people have died from illnesses tied to 9/11 in the intervening years. Or do they also not count?

Of course, if we expand our view and look at the problem on a global scale, the threat of far-right terrorism begins to look like Pluto compared to Islamic terrorism’s Jupiter. The Global Terrorism Index found 66 deaths caused by far-right groups worldwide between 2013 and 2017. It also found that 18,000 total people were killed by terrorists in just the year 2017 alone. Who do we imagine is carrying the bulk of that load? We know it’s not the far-right white men. They could only manage fewer than 70 deaths across both hemispheres in almost half a decade. Whoever is doing all this global killing, it’s not white people. Meanwhile, Rep. Omar prefers to live in a fantasy world of her own construction.

In Case You Missed It:  HERE IT IS: David Brock’s Playbook on How Far-Left Is Going to Target and Destroy GOP Congress in 2023 Like They Did Conservative Media in 2017
Posted in Terrorism and tagged Congress, Democrats, hate, Muslim, Racism.

This Lawsuit Over ‘Sex’ and ‘Gender Identity’ Will Have Sweeping Implications

“I felt like I had been punched in the stomach. I was just gasping for air.” That’s how Nancy Rost...