Most people’s worldviews are heavily influenced during their formative years. Those influences, and their roots, are important to discern among our national leaders. 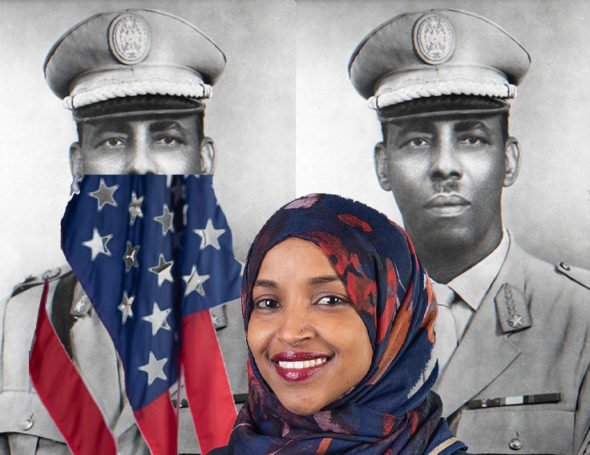 The election of Congresswoman Ilhan Omar (D-MN) is often seen as a celebration of diversity: An immigrant from the wasteland of Somalia, and one of the first two Muslim women, elected to the United States Congress.

Omar personifies the Red-Green Axis: an ideological and political combination of Marxism-Leninism and Islamism.

Does America really want this inflicted on the greatest democracy in the world in which the opposition party is increasingly tilting radically left?

Studying the political ideology of Ilhan Omar I am struck by how similar they are to that of the brutal dictator, Siad Barre, who governed Somalia with an iron fist when she was young girl in that country.

When Barre seized power in a coup d’etat in 1969, following the assassination of the president, Ali Shermarke, he built a new political order, a one-party regime built on a mix of Communism and a local form of political Islam.

He abrogated the constitution within hours of his coup, and ruled the country by decree until he had time to redraft a new constitution.

Are we not hearing calls to repeal parts of the US Constitution by members of the new left in American politics?

The United Nations profile of Siad Barre explained, “The theoretical underpinning of the state ideology combined aspects of the Qur’an with the influence of Marx, Lenin, Mao, and Mussolini, but Siad Barre was pragmatic in its application. ‘Socialism is not a religion,’ Barre explained, ‘It is a political principle to organize government and manage production.’”

An organized Socialist government managing production is the underpinning of the new left of the Democratic party being promoted by Ilhan Omar.

When Barre grabbed power, Marxist sympathies were not deep-rooted in Somalia. In order to achieve his political goal, the dictator denigrated the Opposition, did away with the previous governments law enforcement, replacing it with his own tough enforcement police and military rule.

Sound like the tactics of the radical left today in America.

Ilhan Omar never explained what she meant when she described her father, a central influence in her life, as the Somali “teacher of teachers.”
It was a telling remark.

In Somalia, Siad Barre introduced a nationwide indoctrination campaign. He appointed teacher trainers whose job it was to indoctrinate the government-run education system into the dictator’s Koranic-Marxist-Leninist ideology.

This radical Red-Green political agenda can be found both in Britain with Jeremy Corbyn’s associations with Islamist forces, including the IHRC in Britain, Hamas, Hezbollah and Palestinian terrorists abroad.

We see it with Ilhan Omar who goes on fund-raising junkets not for the Democratic Party but for CAIR, the American branch of the Muslim Brotherhood and a co-conspirator for Hamas.

In Somalia, Barre moved from rule control to thought control. Civil servants were required to attend reorientation courses that combined professional training with the regime’s political indoctrination. Anyone found incompetent or politically resistant was fired.

The propaganda ministry reached into national broadcasting and local communities with loudspeaker announcements blasting the dictator’s political ideology in Town Squares. The regime’s brainwashing continued as they raped, robbed and ruined their country which descended into civil war.

Ilhan Omar may blame America for the turmoil in Somalia but it was the Barre regime with his accolade of apparatchiks that brought about the destruction of that country.

The regime set out to destroy traditional social structures and reduce the opposition to powerlessness by imposing its central control over the country. They depended on a compliant media.

Was Ilhan Omar’s father, the teacher of teachers, part of, perhaps a leader in, the political education system in the service of a brutal genocidal dictator?

Human Rights Watch issued a report entitled, “Somalia. A Government at war with its own People.”

The United Nations Development Programme declared, “The 21-year regime of Siad Barre had one of the worst human rights records in Africa.”

The UN report on Somalia stated, “The newly formed Ministry of Information and National Guidance set up local political education bureaus to execute the government’s message to the people and used Somalia’s print and broadcasting media for the ‘success of the socialist, revolutionary road.’”

These bureaus required teacher trainers to retrain teachers into the ideology of the regime.

It is legitimate to ask, was Ilhan Omar’s father, the teacher of teachers, part of, perhaps a leader in, the political education system in the service of a brutal genocidal dictator?

Was he the Josef Goebbels of the Somali regime? The opposition certainly did not have teacher trainers.

The slogan of the Somali Revolutionary Socialist Party was “social justice” and “scientific socialism” as they delivered an intolerant national injustice.

There was a mass dismissal of non-compliant civil servants in 1974. Ilhan Omar’s father apparently kept his job.

And what was the connection between Nur Said Elmi and Mohammed Omar in Somalia?

Ilhan Omar’s remark that her “very privileged life suddenly came to a halt” in Somalia reveals something significant.

As the civil war raged in Somalia, including torture, mass murder and the genocide of the opposition Isaaq tribe, no one in the people’s opposition to Siad Barre lived “privileged lives” in secure compounds.

Was it a coincidence that the Said Elmi family did not flee from their “privileged lives” in their sheltered compound in Mogadishu until just before the fall of the Barre regime?

To me, at least, the answer is clear.

Another slip of the tongue, this time by Ilhan’s sister, Sahra, is telling.  Following Ilhan’s election to Congress, Sahra celebrated by congratulating their father who, she claimed, was a “great political strategist and fundraiser,” and that Ilhan Omar’s victory “would not have been possible without him.”

One wonders where this talent and aptitude came from. Could it have derived from his professional experience in Somalia and his contacts with the Somali community in America, many of whom may have been on the side of the war criminal, Barre?

Is America turning a blind eye to people who entered the United States illegally and who aided and abetted a murderous regime?

Why hasn’t the genocide committed by the Siad Barre regime, and all those culpable in the human rights and war crimes committed in Somalia, ever come before the International Court of Justice?

Would it be disqualifying to have someone sit on the US Foreign Affairs Committee who is under the paternal political and ideological guidance of someone who could have been close to the top of a Marxist-Islamist dictatorship?

Why hasn’t the genocide committed by the Siad Barre regime, and all those culpable in the human rights and war crimes committed in Somalia, ever come before the International Court of Justice?

Ilhan Omar and her father can produce evidence of his role in the Somali civil war? Why have they been totally silent about the burning issue?

There may be no there, there, but surely an investigation is warranted into the roles played by the senior members of the Said Elmi-Omar families in Somalia under Barre? She talks about her grandfather, but not of her father. Why? Especially if he is such a great political strategist.

It is clear that the political ideology of Ilhan Omar is not too far removed from that of the Siad Barre in Somalia.  There are signs of a Red-Green alliance emerging out of Democratic politics. Perhaps a part of that derives from Somali politics.

Ilhan Omar hails from a country that never saw a Jew yet was steeped in anti-Semitism.

Omar never met a Jew in Somalia, nor in Kenya. She barely met a Jew in her Somali-community in Minnesota. Yet she is a virile anti-Semite. It is a well-known cultural affliction throughout the Middle East.

Is Ilhan Omar the second generation of a family attempting to subvert the democratic system of their respective countries?

Does America really want this inflicted on the greatest democracy in the world in which the opposition party is increasingly tilting radically left?

Ilhan Omar and her Father

23 years ago, from a refugee camp in Kenya, my father and I arrived at an airport in Washington DC.

Today, we return to that same airport on the eve of my swearing in as the first Somali-American in Congress. #Hope #Ilhan ?? pic.twitter.com/jVeP3DOipN

By 2024, All US Debt Issuance Will Go To Serve Interest Payments Alone

by Andrew Bieszad Earlier in 2019 I asserted that based on historical patterns, the current state of the economy suggests 2003-type...