Contributing Factors in Our Moral Decay 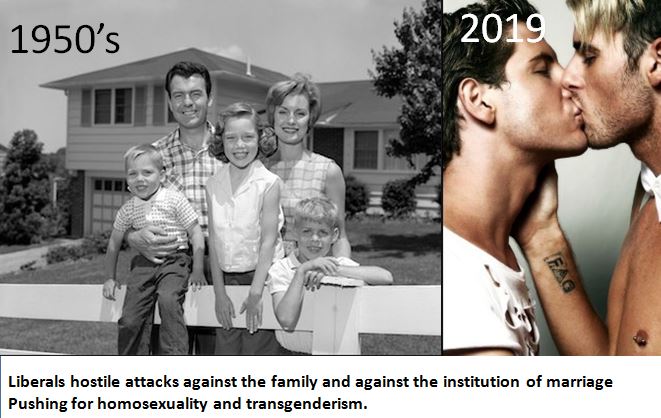 In the El Paso shooting’s wake, evident is the same wash-rinse-repeat pattern. There are the inevitable calls for gun control by demagogues concerned only about people control, those who put the onus on whites when most mass shooters are non-white, and propagandists who blame the “Right” when most violence originates with the “Left.” It’s quite tiresome, really. In truth, the main underlying cause of increased mass-murder events—and so much evil in general—is a severe philosophical/spiritual malaise besetting our nation.

Were gun control the remedy here, mass shootings would be rare. Not only were there fewer firearm laws many decades ago, but in the 1940s and ‘50s New York City, boys would often take guns on the subway because they had rifle clubs at school. So is access to firearms really the problem’s root cause?

As for the El Paso shooter’s motivation, our immigrationismcombined with left-wing environmental concerns, there are people who will do evil in a cause’s name regardless of its nobility or ignobility. The real question here is, boiled down: Why are we seeing so much more evil in America now than in bygone days?

Many people find it ironic that the El Paso shooter’s father is a mental-health therapist. I find it unsurprising. I used to work with children, and “social scientists” often had horribly behaved kids (in fact, a psychologist’s young son was involved in the theft of $300 at the business where I worked).

These anecdotes absolutely relate to a much wider phenomenon. Psychologists have done much to shape modern parenting habits—and thinking in general—in today’s society, and, of course, they tend to epitomize what they peddle.

“Psychology” is a Greek word meaning “study of the soul,” ironic since today the field is soulless. While once part of philosophy, psychology was divorced from it in the 19th century in an effort to make it a science. This was a grave mistake.

Our generation has no purpose, no mission, no goal

Other fill that void with insane ideologies https://t.co/fSC4i7NjQO

Science confines its study to the material world, to what can be observed and measured within it. This means that, from a scientific standpoint, man can only be a physical being, an organic robot comprising chemicals and water.

In this vein and very much to the point, morality—properly understood as something transcending man—cannot exist, by science’s lights. Can you see a principle in a Petri dish or a moral under a microscope?

This idea was reflected in a man I know of who once said, “Murder’s not wrong; it’s just that society says it is.” How can the wholly scientific—that is to say, the wholly atheistic—argue with him?

A person of faith could say, “No, that’s not true because God exists, and divine law dictates homicide’s wrongness.” Of course, that murder-winking man could dispute this theist’s “data” (i.e., that God and His law exist), but he cannot dispute his logic; it’s airtight.

(Note here that logic is not an answer, but simply a method by which answers are found. Thus, the answers will only be as good as the data fed into the system.)

This engenders what’s often called moral relativism, the notion that what we call morality changes with the time, place and people. In reality, though, it essentially is moral nihilism. For if man’s “values,” which really are just people’s preferences, are all there is, then morality doesn’t actually exist.

This idea has swept society, as evidenced by a Barna Group research company study I often cite. It found that, in 2002 already, a minority of Americans and only six percent of teens believed in Truth (absolute by definition), with a majority saying, quite oxymoronically, “Truth is relative.”

Forget Protagoras, the problem with this is that it also boils down to occultist Aleister Crowley’s maxim, “Do what thou wilt shall be the whole of the law.” Moral relativism/nihilism is the ultimate justification. Rape, kill, steal—commit mass murder? Who’s to say it’s wrong? Don’t impose your values on me, dude.

This moral relativism/nihilism—along, of course, with the godlessness of which it’s a corollary—is our deep cultural malaise. It has been encouraged by modern psychology and so many other things; it is why, while we once viewed misbehavior and criminality as moral problems, we now too often consider them psychological problems. In other words, the organic robot is malfunctioning, a result of a defect in its hardware (genetics) or software (programming).

Translation: Forget that mythical thing called morality; we need to find out what kind of chemical intervention or programming alteration (or future gene therapy) can correct the machine’s operation.

This cultural malaise is devastating. Stop believing in something (i.e., morality) and you’ll cease learning about it; this is why most today can’t explain what virtues (“good moral habits”) are, let alone enumerate any great number of them (charity, diligence, chastity, honesty, prudence, etc.).

Moreover, if you neither believe in nor understand something, it follows that you’ll have neither the inclination nor capacity to teach it. Is it any surprise, then, that moderns are doing such a poor job imparting morality to children?

Returning for a moment to the El Paso shooter, do you want to bet that he and his father aren’t part of the morally relativistic/nihilistic majority? How likely is it that dad provided old-fashioned discipline and inculcated his son with virtue?

Interestingly, I’ve long pointed out that when people can no longer reference Truth when making moral decisions, the only yardstick they have left is emotion. Ergo, the modern credo, “If it feels good, do it.” Barna’s study vindicated this, mind you, finding that most Americans now “base their moral choices on feelings.” 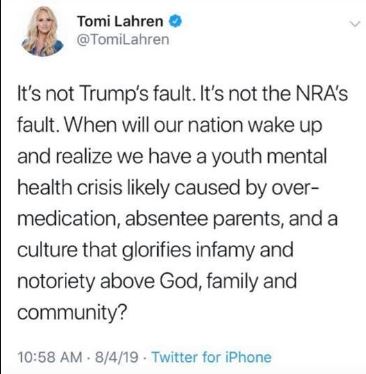 Contributing Factors in Our Moral Decay

Given that emotion is holding sway, we should ask: What’s shaping feelings today? Entertainment is, largely, and it does much to stoke man’s animal nature. Just consider, for instance, the mindless, gratuitous violence; prurient content; and morally nihilistic messages in modern movies and television programs.

Note something else also, and this is where I get pushback even from conservatives and (especially) libertarians, as it slaughters many people’s sacred entertainment cows and, they fear, may imply censorship’s necessity. Studies have shown that 15 years after television’s introduction—and this is true the world over—crime increased precipitously. (I explored this in-depth here.) Now consider that the Internet is TV10.

Video games are a factor as well (and this is where I really get pushback). Lt. Col. David Grossman, one of the world’s foremost experts on what he calls “killology,” contends that simulated video-game participatory violence (and the extreme violence on TV) amount to the kind of conditioning/desensitization used to inure soldiers to killing.

Then, of course, with mass shootings there’s also the psychotropic-medication factor and the copycat phenomenon. As to the latter, in a morally relativistic/nihilistic world where all is vanity, mass murder can be an alluring ticket to fame for those wallowing in meaninglessness.

Yet it all comes down to morality, or to a lack of morality—or, even more precisely, to a lack of belief in it. Note here that the six percent of 2002 teens who believed in Truth simply reflect a pattern, as each succeeding generation is more relativistic/nihilistic than the last. This also corresponds to the generational increase in wickedness. It’s as strong a correlation as you’ll find anywhere.

Say what you will about TV, the Internet, video games, violence or mass murder, it can’t be right or wrong if there is no right or wrong. It’s the ultimate self-evident reality: How can you build a moral society when its shades-of-gray people don’t even believe in morality?

In Case You Missed It:  Japan discovers "magnetic" substance in Pfizer covid vaccines; journalists start DYING from the vax they pushed
Posted in Freedoms and tagged homosexuality, Liberalism, Propaganda.