Leftist fascism is now banning commercials about normal people, because someone might be offended. These commercials banned from the UK because their general public is too infantile to decide on their own “offense level”. 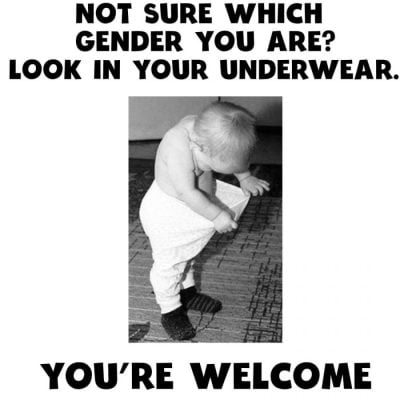 Leftist have turned society into pure insanity, the first ads to fall prey to the U.K.’s new ban on gender stereotypes in advertising are tepid spots for Philadelphia Cream Cheese and Volkswagen. The law, which is enforced by the U.K.’s Advertising Standards Authority (ASA), went into effect in June.

The ads in question were investigated following complaints by radical leftist viewers that claimed they perpetuated gender stereotypes.  We are not allowed to show real people anymore, it has to be a man in drag to be acceptable, or a woman benching 400 lbs.

The Philadelphia ad features two men with babies talking about how good food at a restaurant looks while the babies go by them on a conveyor belt. The Volkswagen ad showed men being astronauts, setting up a campsite, and doing a long jump, while women in the ad were shown reading on a bench reading next to a baby stroller and sleeping in a tent.

The ASA said it received very low lever of just 128 complaints regarding the cream cheese ad and a whopping three complaints about the car ad.

In its insane ruling on the Philadelphia ad, the ASA states that it is aware the ad was done with a comedic tone. Yet the ASA still ruled against it because it found “that the narrative and humor in the ad derived from the use of the gender stereotype,” and thus didn’t lessen “the effect of the harmful stereotype.”

Of the Volkswagen ad, ASA said:

By juxtaposing images of men in extraordinary environments and carrying out adventurous activities with women who appeared passive or engaged in a stereotypical care-giving role, we considered that the ad directly contrasted stereotypical male and female roles and characteristics in a manner that gave the impression that they were exclusively associated with one gender.

Following the implementation of the bans, idiot leftist Jesse Tye, ASA investigation manager claimed in a radio interview that gender stereotypes cause real-world harm, although these is no date to back that leftist BU!!$#IT. The luntaic leftist then when on to say “The types of harms we might be talking about are, for example, affecting people’s aspirations. You know it might affect the career choices girls make or boys make,” Tye told the BBC.

This echoes what the ASA claimed when the ban was implemented. Stereotypical depictions “can restrict the choices, aspirations, and opportunities of children, young people, and adults,” it said. But as Reason‘s Billy Binion wrote, it’s the ban itself that constricts choices, “as it limits companies from advertising their products as they see fit and shields consumers from ideas associated with wrongthink.”

A spokesperson for Philadelphia parent company Mondelez International told Today: “We are extremely disappointed with the ASA ridiculous decision. We take our advertising responsibility very seriously and work with a range of partners to make sure our marketing meets and complies with all UK regulation.”

Geraldine Ingham, head of marketing for Volkswagen U.K., told Today “Just like the men, [women in the ad] are shown taking part in challenging situations, such as in a tent perched on a mountainside,” and “embarking on what is surely life’s greatest and most valuable role—raising another human being.”

I AM OFFENDED BECAUSE I DID NOT SEE A BLACK MUSLIM  MIDGET HOMOSEXUAL TRANSGENDER IN THIS VIDEO!! Next will be white people in commercial at all, you know we don’t want to offend anyone.  We really live in degenerate times if a mother taking care of it’s child is something that needs to be censored.

Next the lady on the bench will have to be in a burka to be allowed, where does the insanity begin and end?

In Case You Missed It:  Government data show that 1 out of every 246 covid vaccinated people DIES within 60 days
Posted in Freedoms and tagged Censorship, homosexuality, Leftists, Liberal Fascism, Propaganda, United Kingdom.

by Andrew Bieszad Conservatives have been warning for a long time now that artificial intelligence based “deep fake” technologies, which first...