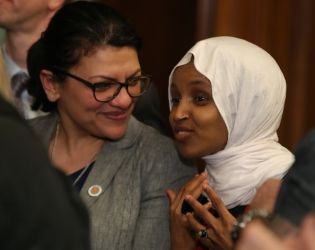 American congressional representative Ilhan Omar supports Hamas.  She has supported Hamas financially, morally, and politically.  Her support is given despite the fact that Hamas, the charter of which defines Hamas as a wing of the Muslim Brotherhood, belongs to the international organization that published its objective of the destruction of the United States, which it also labeled an “enemy state.”

Article 7 of the Hamas Charter, by way of explaining Hamas’ clearly defined objective of destroying Israel and slaughtering Jews, cites the teaching of Mohammed with respect to the last days, when, according to the prophet of Islam, Muslims will hunt down Jews in order to eliminate them.

Omar has been banned from visiting Israel since her efforts in support of the destructive agenda of Israel’s enemies have been deemed good cause by Israel to prevent her from doing so from within Israel’s borders.  But Omar claims that such action is unworthy of an ally of America.  Presumably, America should adopt Omar’s self-destructive standard to appease Omar’s measure of what is worthy.

Omar’s congressional colleague, Rashida Tlaib, was recently given permission to visit her grandmother in Israel, despite sharing Omar’s contempt for Israel and support of Hamas.  She decided not to make the trip, complaining that the condition imposed by Israel (that Tlaib refrain from promoting boycotts of Israel while in Israel) was unjust.

Omar has been responding to those bans with additional criticism of Israel, claiming that those bans and certain other acts taken by Israel prevent the achievement of peace between Israel and the Palestinians.

“These actions do nothing for peace — the total opposite, they prevent peace and deepen the occupation,” Omar said with regard to the bans.

Omar’s assessment of the diplomatic situation between Israel and the Palestinians places blame squarely on Israel for the perpetual conflict that periodically flares up between the two peoples.  Either she overlooks an inescapable reality concerning the published attitude and objectives of Hamas or she chooses not to mention it.

In fact, Article 13 of the Hamas Charter clearly states that Palestinians have no interest in peace or negotiations with Israel.  Did Omar skip over that section?  No matter, as her own efforts to obliterate Israel reflect compatibility with the agenda of Hamas.

While it is true that not all Palestinians are members of Hamas, it is also true that members of Hamas were elected into a majority of the Palestinian legislature by popular vote, which took place well after the Hamas Charter was published in 1988. So popular support of Hamas’s attitudes and objectives seems evident.

If one takes the time to read up on the Arab-Israeli conflict, one discovers that efforts by Arabs to eliminate Jews predate the founding of the State of Israel.  The 1920s were a period of particularly homicidal aggression against Jews by Arabs in the Holy Land.  At that time, the population of Jews in the Holy Land was significantly smaller there than it is now, and no one complained of occupations.

It was not until 1968, when Jordan lost control of its occupation of Judea and Samaria, and when Egypt lost control of its occupation of Gaza, that Arabs began to complain of being occupied by Jews.  If the nations surrounding Israel had not decided to once again invade Israel in another failed attempt to destroy Israel, Gaza would have still to be occupied by Egypt, and Judea and Samaria by Jordan, since Arabs accepted those occupations without complaint.

But the Arabs and Omar and Tlaib complain about only the Israeli occupation of Israeli territory, since it should be, according to international Islamic convention, forever under the control of Islamic forces.

It might be interesting to recall here the definition of peace immortalized by Yasser Arafat, now defunct popular leader of the Palestinian people, who said, “Peace for us means the destruction of Israel.  We are preparing for all-out war, a war that will last for generations.”

When two reporters showed up at the Wisconsin governor’s office in February for a press briefing on the new administration’s...