In 2015, Obama told the United Nations that climate change was the greatest threat against humanity’s future, particularly for those living close to the ocean.

Looks to be the Obama’s took one look at the impending apocalypse due to… global warming,.. um we mean climate change touted by AOC, and every Democratic front runner, and his party’s former presidential nominee Al Gore. Then he took another look at an oceanfront property being sold at a whopping $15 million and said, “Screw it “Let’s roll the dice.” 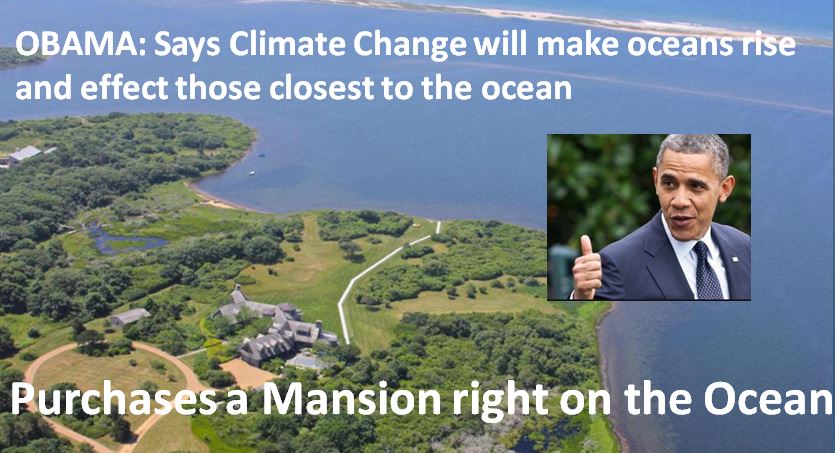 OBAMA: “No nation, however large or small, wealthy or poor, can escape the impact of climate change.  Rising sea levels threaten every coastline.  More powerful storms and floods threaten every continent. More frequent droughts and crop failures breed hunger and conflict in places where hunger and conflict already thrive.  On shrinking islands, families are already being forced to flee their homes as climate refugees.”

Multiple island sources tell us the Obamas are in escrow for the estate owned by Boston Celtics owner, Wyc Grousbeck. The former Prez and First Lady have been renting the house this summer and loved it so much, we’ve learned they made an offer. The property is listed at $14,850,000. Our sources say they’re paying less, but we don’t know how much.

The estate — incredible. It’s 29 beachfront acres. The main residence is just shy of 6,900 square feet. It has 7 bedrooms, so Sasha and Malia have a place to crash, along with several of their friends. It has the obligatory pool, an outdoor fireplace, a chef’s kitchen, vaulted ceilings and 2 guest wings. It has incredible views, especially while soaking in the second-floor balcony Jacuzzi.

Obamas must have actually looked at the data supporting the Climate Change Hoax and reached the conclusion that only fools would believe this nonsense, and that there is no risk of harm from sea level rise.

The Obamas are no fools. They manufacture climate hysteria and then snap up coastal property at a discount.

Climate change is only for the little people, you know, you and me to make sacrifices for. So they can’t have all us Deplorables taking up good oceanfront property and using up all the fossil fuels they and their children will need in the coming decades to jet and yacht their way to those destinations.

Keep in mind that back in 2012, the onetime savior of the progressive party told a crowd, “I do think, at some point, you’ve made enough money.” Now, it’s unclear what “enough money” means for Obama, they own a $10M home in Washington DC and now this $15M, home is that enough?

Obama who pretended to be a principled opponent of wealth inequality and fossil fuels, the former president has loudly criticized other rich people for the huge, carbon-gluttonous houses they buy. On April 25, 2010, the man who has become fabulously wealthy scolded Wall Street CEOs with this admonition:

“I do think at a certain point you’ve made enough money.”  (see video)

His views about the sin of making too much money haven’t changed. During a speech in South Africa last year, this shining example of environmental stewardship and unparalleled concern for the poor spoke passionately about the unfairness of some people having more money than others in blasting other rich people for their excessively lavish lifestyles:

That direct quote came from the lips of a man who, along with his wife, is sitting atop a staggering $135 million fortune. But don’t feel sorry for them, because there’s much more to come: with money barreling their way like a runaway freight train, the concerned couple is rapidly becoming a billion-dollar brand.

Sharing with the less fortunate: During the five years from 2000-2004, a period when they earned $1.2 million, Barack and Michelle Obama donated less than one percent of their income to charity, ten times less than the tithing guidelines of their professed Christian faith. Only when Obama decided to run for president did the couple’s charitable instincts improve.

Protecting the planet: During his first full day in the White House, President Obama was photographed without his suit jacket. Senior advisor David Axelrod explained: “He’s from Hawaii, okay? He likes it warm. You could grow orchids in there.” Yes, the heat was on full blast.  On the campaign trail Obama vowed to exhibit environmental leadership if elected: “We can’t drive our SUV’s and eat as much as we want and keep our thermostats set at 72 degrees. That’s no leadership. That’s not going to happen.”

In decreeing earth’s ever-changing climate an imminent threat to our very survival, the noble man who has utter

contempt for wealth inequality and fossil fuels says people who live in big houses and take nice trips are doing grievous harm to the planet. You can see more in the article below about how this selfless paragon of environmental virtue is providing unparalleled leadership to us all by cutting his own carbon footprint to the bone.

Climate hysteria would disappear in the blink of an eye if the self-righteous rich people who push it the loudest were required by law to give up private jets and living in lavish mega-mansions like Obama and his Hollywood cronies do.

A Bill to Give Former Inmates a Second Chance

Congress is currently considering the Fair Chance Act of 2019, a bill designed to increase the odds that formerly-incarcerated individuals...