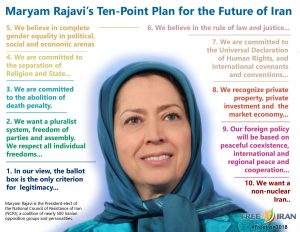 The Trump administration should not enter into any dialogue or negotiations with the Terrorist Mullah Regime of Iran, either directly or by any back channels.

To do so, would be betraying the millions of Iranians being persecuted both in Iran and around the world by Quassam Solimani’s  Quods forces, the IRGC, the secret police MOIS and the Basiji thugs, and would deal a fatal blow to the aspirations and longing by the Persian people, for a free democratic Iran again.

It also would mortally set back the dreams and labors of the Iranian Resistance ( MEK) to overthrow the Fascist Clerical Regime of Tehran, and install a pluralist Government seperating Religion from State, and recognising the liberty of all religious persuasions to practice their faiths in peaceful co-existence with each other in a Liberated Non Nuclear Iran.

Negotiating now with the Terrorist Mullahs would be a grave mistake just when their despotic rule is tottering on total collapse under President Trump’s Maximum Pressure Sanctions and Levies, and would throw the devious and calculating Mullahs a lifebelt just in the nick of time. It would also register a tremendous slap in the face to Trump’s great friend and ally Benjamin Netanyahu and the State of Israel, who are already under relentless and unremitting pressure and danger from Iran, Hezbollah and its Shia proxies and militias on all of its borders.

The required thinking behind this scheme to negotiate with the Terrorist Mullahs is deeply troubling and perverse, when you consider that Iran has violated every treaty and pact it has ever entered, including the infamous Iran Deal of  former US President Barack Hussein Obama and the EU Heads of State.

Quite simply stated, President Trump should strangle this projected initiative at birth, because no good will come from it.

Men Are Avoiding Women At Work Because Of “MeToo”

by Andrew Bieszad Men are usually attracted to women regardless of the setting. However, especially in the workplace, there has been...