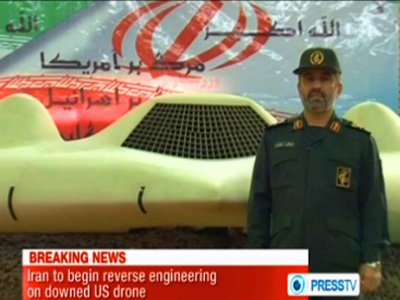 Most of us have long understood that Obama is a traitor to our country and a mole whose  not so covert mission is to destroy America. The circumstances surrounding the “crash” in Dec 4 2011 of a U.S top secret RQ170 Sentinel drone simply didn’t add up.

To recap, first we were told that Iran might’ve shot down the US drone, and then the the Obama admin changed the story to “the drone landed on Iranian soil.  We were told that the drone “lost it’s tether” and  that it  managed to land unscathed all on it’s own and without fuel because “IT WANTS TO LIVE” right into Iranian hands.

The immediate and obvious questions were these: 1) Why didn’t we try to recover the drone? 2) In lieu of a rescue effort why didn’t we bomb it into oblivion?

Fox News National Security Correspondent Jennifer Griffin reported that apparently the Pentagon  pleaded with Barrack Hussein Obama to give the order to do just that. The Pentagon initially wanted to send a special forces team to recover the drone.  Obama shot down that suggestion. Then the Pentagon offered up Plan B , blow it to kingdom come. FOX News reports that there was third option and Obama struck that down also. Obama refused all three of those  options  and now Iran and China have a brand spanking new fully functional top secret US RQ 170 Sentinel Drone.

More recently in 2018, a senior Israeli Air Force officer told reporters Monday that they intercepted an Iranian drone and found it was a “copy” of a stealthy U.S.-built RQ-170 Sentinel downed by Iranian forces over Iranian territory in 2011.

The RQ-170 Sentinel is made by Lockheed Martin and is equipped with stealth technology and can sneak into to any country by surprise and Iran just did that this week. Recent satellite pictures showing the surgical strike on the oil facility in Abqaiq, Saudi Arabia by a Drone.

Over the weekend multiple drone devices were able to pierce Saudi defenses in a way that a traditional air force could not: flying long distances to drop potent bombs that apparently set vast portions of the Saudi petroleum infrastructure ablaze.

The attack, for which Houthi rebels battling Saudi Arabia in Yemen took credit , underscored the fears raised by U.S. security officials and experts in terrorism about the rapid evolution of technologies allowing expanded unmanned flight. Iran and Yemen have had cordial, if tepid, relations since the Iranian Revolution in 1979.

Oil prices are expected to surge.

President Trump made a quick move and said “Based on the attack on Saudi Arabia, which may have an impact on oil prices, I have authorized the release of oil from the Strategic Petroleum Reserve, if needed, in a to-be-determined amount.”

Thanks to Obama we are likely to see many more of these sorts of attacks, and in particular, coordinated attacks on multiple targets are likely, possibly in tandem with a cyber attack component. These attacks could be anywhere, including inside the United States.

After Another Allegation in New York Times, Trump Urges Kavanaugh to Sue

President Donald Trump accused Democrats and members of the press of waging an influence campaign against Supreme Court Justice Brett...