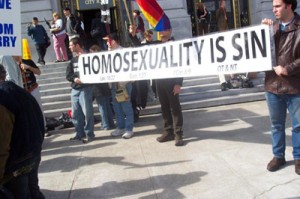 One of the major trends that so few people have spoken about in the last three decades since the writing of the Gay Manifesto in 1987 is the rise of sodomite behavior as an accepted lifestyle. Shoebat.com has covered extensively in her archives the moral and social implications of this. The consequences of this in the Bible are very clear, as it is one of the worst sins a man can commit and is a product of as well as generates a host of new sins which feed upon a man and eventually bring about his destruction. The philosophy is evil, as it is non-genitive and encourages hedonism that justifies many abuses, including child sexual abuse. The physical consequences are very evident, and include contracting incurable diseases (HIV, HPV, Herpes) and many curable but potentially deadly ones, drug use, the physical collapse of one’s body (prolapsed intestines, etc.), and other problems.

It is not a simple accident as to why adult diapers have exploded in popularity, and it is not because of the generally aging population alone, but because of the LGBT, since due to their abuse of their colorectal regions, what they turned from being an “exit only” into their “tunnel” for hedonistic pleasure is a door that is now veritably permanently opened, for the thin muscles meant to expel waste material are no longer able to be held together tightly and so as easy as one can stick unnatural objects into them, so can waste material easily fall out.

Does this gross description make you uncomfortable? It should because this is the reality of sodom, and since statistics indicate that it is likely over 90% of Americans support the concept of sodom, they should also support the consequences of sodom too, for the product cannot be divorced from the process by which it is created.

Because of the tremendous support of sodom yet the high but slowly declining numbers of Christians in the US, there are many Christians who are enablers of sodom, and this is also born out by statistics and has been covered in the Shoebat archives. Thankfully, there is a bloc within America Christianity as a whole that opposes sodom on moral principles. But how strong is that bloc?

Ted has written many times about the scandal of American Evangelical Protestantism, which is that it “preaches Jesus” not only without regard to history, but without any connection to theology or morality as it has always been taught. American Protestantism, which grew out of the rebellions from Europe, continues the tradition of a slave-like and dangerous submission to nationalism and cultural ethos covered under a veneer of Christianity, becoming a social lobbyist for state and cultural policies instead of an agent that exists within but stands independent from the waves of human passion and social discourse as her moral teachings are to be applied. Sin is always sin and must be treated as sin lest it be equivocated under the impression of goodness for a virtue instead of acknowledging it as a vice.

Three years ago, a Muslim and sodomite named Omar Mateen, who used to troll online for sodomy with random men, did a mass shooting at the sodomite pulse nightclub in Orlando. While many people were upset, I described the shooting as akin to the famous “Freddie vs. Jason” horror film characters in conflict, because both are two denziens of hell and are equally evil. What Omar Mateen did was evil and he was also a sodomite, but so is what the people at “Pulse” did equally evil in the eyes of God.

Yet three years later, it is for all practical purposes, a buried fact as dead as the sodomites at that club who Mateen shot that Mateen himself was a sodomite. Equally dead are many of the calls to repentance from such sodomites from American “Christians”, who are instead comemmorating the shooting with calls of ‘conversion to the love of Christ’ and without any acknowledgement of the sin:

A group of passionate millennials who call themselves “overcomers” brought the Freedom March to Florida to share how Jesus delivered them from the LGBT lifestyle.

Angel Colon and Luis Javier Ruiz hosted the event and led the sharing of testimonies of salvation at a bandshell before the group marched around the park. Both men are survivors of the mass shooting at Pulse nightclub in 2016 and have since left homosexuality and started a ministry called Fearless Identity to help churches effectively share the love of Jesus with the LGBT community.

“It’s not a gay to straight thing, it’s a lost to saved thing,” Ruiz declared.

The group proclaimed to the crowd that God “loves gay people” and it’s important that people come to know Jesus as their Savior before trying to change their lifestyle. They preached that it is God who transforms and it has nothing to do with conversation therapy or anything else of the sort. (source)

Now it is good to want to help people recitfy their lives. But upon looking through the website for this “group”, which is calling itself “Fearless Identity”, there is nothing in it talking about sin or the evils of sodomite behavior, but calls for “repentance” as well as using the same terminology as the sodomites use to describe the “community”. The two “former” sodomites, of which we have no proof they have stopped their practices, describe themselves as “CEO”s of their group.

Sin is always sin, and while it is important to be charitable towards people (for the expression that ‘more flies are caught with honey than vinegar’ is often a wise counsel), Jesus did not hesitate to call people out for their sins using very harsh language. How many times did he verbally castigate the Jewish intelligensia to their faces? Was God “full of hate” when He called Jerusalem the city of “Sodom and Egypt”? Or what about Jesus when after He preached the truth about the Eucharist, the very bread from Heaven meant for the salvation of the world, that upon seeing those who followed Him leave, he turned to his disciples and said:

So what is to be said of these two sodomites, who are preaching a line of a vague Christ and while claiming to be different from “gay conversion therapy”, another false front which was created by a man who is not a sodomite himself, have no direct admission of the horrors of sins, nor discuss what they did, but now are calling themselves “CEO”s of what would appear to be a “Christian” business?

Are these people actually preaching true repentance, or like many of the American Evangelical establishments called Christian, are they simply making profits and attention from Christians while strategically sewing tension between “Christians” and the majority sodomites and sodomite supporters in the US, possibly setting a scene for further laws against the criticism of this practice?

Who are these people? Nobody really knows, yet there are enough people in the American Evangelical circles who are ready to pledge support of them. This should be a warning sign to stay away from such groups and instead of seeking the newest or loudest group, to return to the stability of settled doctrine as articulated through Sacred Scripture and Tradition and expressed in the Bible, the tradition of the Church, the writings of the saints, the declarations of the Church Fathers and the councils, all which clearly state that this sin is evil, it brings down the wrath of God on a people, and those who would seek to follow in her ways would soon find themselves on the pathway to sodom or, like Lot’s wife, turned into a pillar of salt for looking back in support of Sodom. For the man who truly wants to be a Christian, or who truly wants repentance from his sins, such counsel is sufficient and offers more than any questionable “group” ever could in a politically charged time in history where tension is used as a vehicle for social manipulation for a society and to promote a theological error of a false mercy.

VIDEO: Climate protests are not about the environment

In climate change, the left has found an emergency big enough to justify taking control of everything.