Authored by Tom Elliott via Grabien.com,

On Wednesday Rep. Adam Schiff (D-Calif.) offered a compelling case for impeaching President Trump. Describing his actions as a “classic mafia shakedown of a foreign leader,” Schiff said Trump in a phone call with the Ukrainian president threatened to withhold aid if he didn’t produce comprising intelligence on his 2020 political rival, Joe Biden.

“The president communicates to his Ukrainian counterpart that the United States has done a lot for Ukraine; we’ve done an awful lot for Ukraine, more than the Europeans or anyone else has done for Ukraine, but there’s not much reciprocity here. This is how a mafia boss talks. What have you done for us? We’ve done so much for you. But there’s not much reciprocity. I have a favor I want to ask you. And what is that favor? Of course the favor is to investigate his political rival, to investigate the Bidens.”

Schiff’s painting a picture — using invented dialogue, a trick he tried again in a subsequent congressional hearing — of a president manipulating U.S. foreign policy to wrest personal favors from foreign leaders. But as more evidence comes to surface, that picture is quickly fading.

1. No quid pro quo. Despite Democrats’ initial claim, there was no quid pro quo. The call transcript shows the topic of aid only came up in reference to how well the U.S. treats Ukraine, particularly as compared to Euro nations, most specifically Germany. At no point does Trump threaten to withhold anything, as even some of Trump’s media critics conceded.

2. Ukrainians weren’t pressured. Democrats and the media have repeatedly insisted President Trump “acted like a mob boss” in applying pressure on President Volodymyr Zelensky. He, however, defended Trump, saying he felt no pressure. “ I think you read everything,” he told reporters in New York this week. “So I think you read text. I’m … I am sorry but I don’t want to be involved to democratic open, uh, hum… ??????e… elections of U.S.A. You’ve heard we had, um, I think good phone call. It was normal. We spoke about many things and I thought so. And I think and you read it that nobody push it, pushed me.”

3. Timeline. Politico’s Ken Vogel reported that the Ukrainian delegation hadn’t even been made aware aid was held up until a month after the Trump call. It’s hard to see they could feel they’re being “extorted,” as Democrats keep saying, if they weren’t even aware of the pressure supposedly being applied.

4. No Illicit Favors. When the White House released the call transcript, readers noticed that after some initial mutual flattery, Zeleznsky brings up buying more Javelin missiles; President Trump then asks for a favor and requests additional information into 2016 election meddling. Rep. Adam Schiff suggested Trump’s request for a “favor” actually referenced wanting dirt on Joe Biden, but Biden only comes up later in the conversation, and in a separate context. Nonetheless, the major media almost uniformly reported the “favor” line from Trump’s call in the same inaccurate fashion.

5. Whistleblower Complaint Lacks Credibility. This complaint, which Democrats for some reason insisted was more important than the call transcript itself, was basically a version of that original call that had been run through a game of telephone. The report had the basic story reasonably accurate, but then supplemented that synopsis with additional accumulated gossip. At least three key details in the complaint have since been shown to be false. As the document is itself a product of hearsay — the self-described whistleblower admits at the beginning of his report that he never witnessed anything — and the fact it contains demonstrable inaccuracies, its importance should certainly be subjugated to the call transcript itself.

6. Fake News, Bad Polls. The media outlets driving the story have thrown into question their credibility after a series of major mistakes. The Washington Post reported the director of National Intelligence, Joseph Maguire, threatened to resign if he weren’t allowed to speak publicly about the whistleblower report. Maguire responded and emphatically called the Post’s report untrue, repeating that insistence while under oath during subsequent congressional testimony. ABC News and Axios both reported that an adviser to the Ukraine president said their delegation was aware in advance that aid money was being used as leverage; unfortunately for these media outlets, their source wasn’t actually an adviser to the president and the outlets had to issue updates.

Democrats are pointing to a growing number of Americans supporting impeachment to buttress their argument, but it’s a safe bet these numbers will shift after the dust on this story starts to settle.

7. Adam Schiff. Two weeks before Congress was notified of an intelligence community whistleblower report, Adam Schiff was already tweeting out the thrust of the accusation:

Trump is withholding vital military aid to Ukraine, while his personal lawyer seeks help from the Ukraine government to investigate his political opponent.

It doesn’t take a stable genius to see the magnitude of this conflict.

Or how destructive it is to our national security. https://t.co/X4yhTS2q1Z

How was Schiff made aware of this report before Congress? Who in the intelligence community was Schiff in contact with? Did he have any role in helping engineer the report’s entry into Congress? These are questions Americans deserve having answered before they can fairly consider the merits of impeaching President Trump.

8. Origins. The Federalist reported late Friday that the intelligence community adjusted rules related to whistleblower complaints so that hearsay evidence could now be accepted. Whereas historically a whistleblower actually has to witness the conduct to file a report about it, a month before this report was sent to Congress, the intelligence community dropped this long-standing requirement and the “whistleblower” was subsequently able to file his report. A spokesman for the DNI refused comment to the Federalist for why the change was made.

This awfully convenient timing surely requires further investigation before lawmakers can be expected to fairly adjudicate the accusations against Trump.

9. Rudy. It’s widely reported Rudy Giuliani was Trump’s go-to guy for actually carrying out this conspiracy. On his call, Trump told the Ukraine president to speak with Rudy (as well as AG Barr), about the investigation into an oil company on whose board sat Hunter Biden, the former vice president’s son. But Giuliani first communicated with his Ukrainian counterparts more than a year before Biden entered the race. Yes, it’s possible they anticipated Biden eventually entering the race; but it’s also possible Trump actually thought there might be legitimate corruption worthy of investigating. Giuliani tries to prove this point by noting the State Dept. was helping coordinate his communications. This may be unseemly, and perhaps even unethical, but it’s not entirely different from the role (as some have pointed out) Sidney Blumenthal played when Hillary Clinton was Secretary of State. At the least, a lot more information is needed before establishing Trump’s use of Rudy clearly demonstrates any kind of impeachable conduct.

10. Coverup? Democrats say the White House has engaged in a pattern of obstruction and coverup to hide their wrongdoing. But is this true? DNI’s Maguire only opted against releasing the report to Congress after the Department of Justice’s Office of Legal Counsel said the report did not concern conduct within the intelligence community and was thus “statutorily deficient.” Maguire was following the law, but Democrats rebelled, and ultimately the report was released anyway. The White House also released a transcript of the call itself. It’s hard to see how the White House is guilty of a coverup when they’ve already released the primary documents.

Other media speculators pointed toward the whistleblower report alleging the (now public) transcript having apparently been transferred to a “more secure” server. On Friday night, former National Security Adviser to President Obama, Susan Rice, said that the Obama Administration likewise moved occasionally transcripts to this server (though she said, somewhat unsurprisingly, that when they did it there was a compelling reason). CNN additionally reports that the Trump Administration has been placing all of these foreign call transcripts on this server for more than a year in an effort to contain leaks. 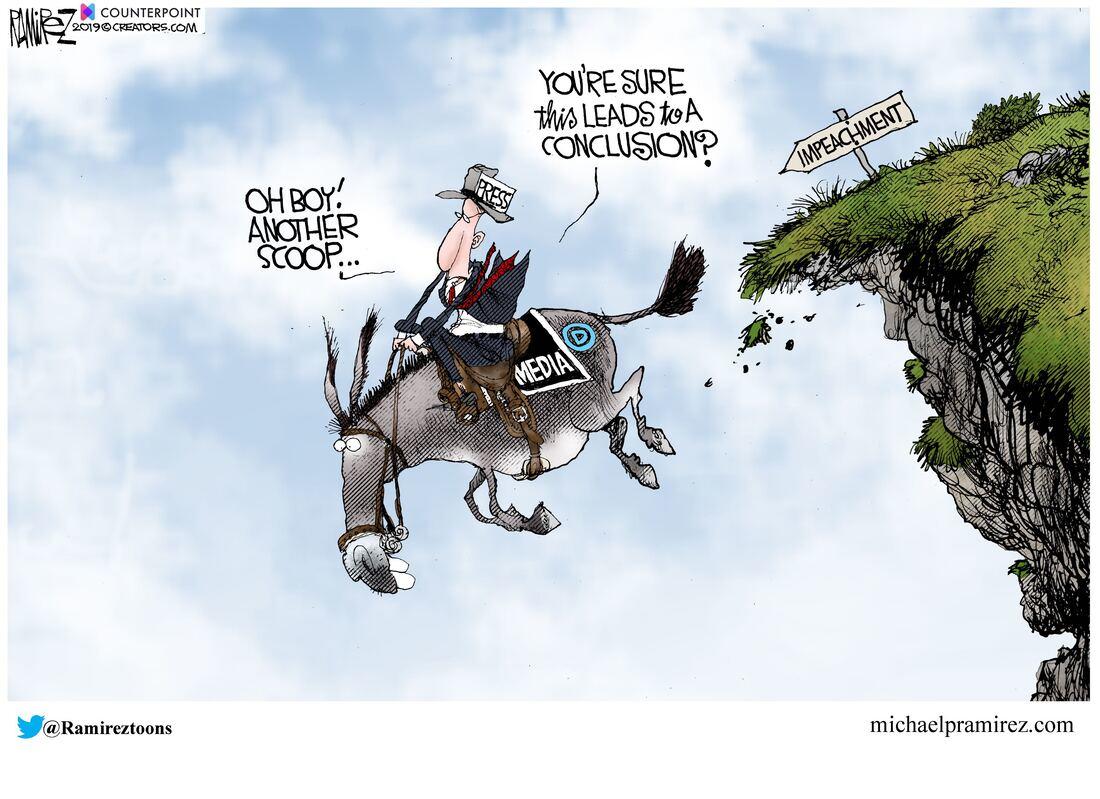 In Case You Missed It:  Fauci Mocks Call by Ted Cruz to be Investigated for Lying to Congress: “What Happened on January 6, Senator?”
Posted in Tyranny and tagged coup, Democrats, Impeachment.

Transgenderism is a revolt against normalcy. It is something that would have been hard to imagine just a few short...