The House Ethics Committee is investigating a campaign finance violation by this Islamist congresswoman Rep. Rashida Tlaib after she cut herself a salary from her 2018 campaign after being elected. 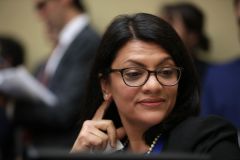 Democratic committee Chairman Ted Deutch of Florida and Ranking Member Kenny Marchant, a Texas Republican, announced the move in a Monday press release. The complaint against the Michigan Democrat was transmitted to the committee in August from the Office of Congressional Ethics.

Federal Election Commission filings show that after her successful midterm election, Tlaib paid herself a total of $17,500 from her official campaign. Candidates are allowed to draw a salary during their campaign period but are blocked from doing so the day after the general election. Salary disbursements appear to have been made on Nov. 16 for $2,000 and Dec. 1 for $15,500.

Tlaib’s spokesman told Politico that the congresswoman “has cooperated completely with the committee to resolve the referral, which involves the same claims over her publicly disclosed salary during the campaign that conservative groups pressed back in March.”

The committee has until Nov. 14 to announce what action, if any, it will take on the matter.

In these times of near civil war, Americans agree on almost nothing. Yet sometime in 2019, almost all of America...