Authored by Raul Ilargi Meijer via The Automatic Earth blog,

It took just 4 months after the deplorably failed Mueller probe of alleged Trump links to Russia, for the Democrats to raise the next -faded- red flag, Ukraine. And they do so in a manner that reminds me, personally, a lot of what happens in the UK. That is, the process has now moved on to what is legal or not and who decides what is or not.

Nancy Pelosi apparently has been told by her legal advice that it’s okay for her to move ahead with an inquiry, that she can even label an Impeachment Inquiry, without following established Capitol Hill procedure. Needless to say, them slopes are mighty slippery. Because if true, it would mean she can call the ‘other side’ offside for as long as she wishes.

She would, in effect, prorogate the US House the same way Boris Johnson tried to do Parliament in Britain. And not by shutting it down from the outside (Boris as PM) but from the inside (using her powers as Speaker). It would appear it’s time for every American to pay attention, because this could have grave consequences far into the future.

Pelosi’s plan is to not have a House vote on initiating the inquiry, but to just go ahead and have one, and stealing the name Impeachment Inquiry for it. Why? Because she thinks that way she can have only Democrats ask questions, issue subpoenas etc., while House Republicans could only sit and watch the spectacle (not what they were elected for). 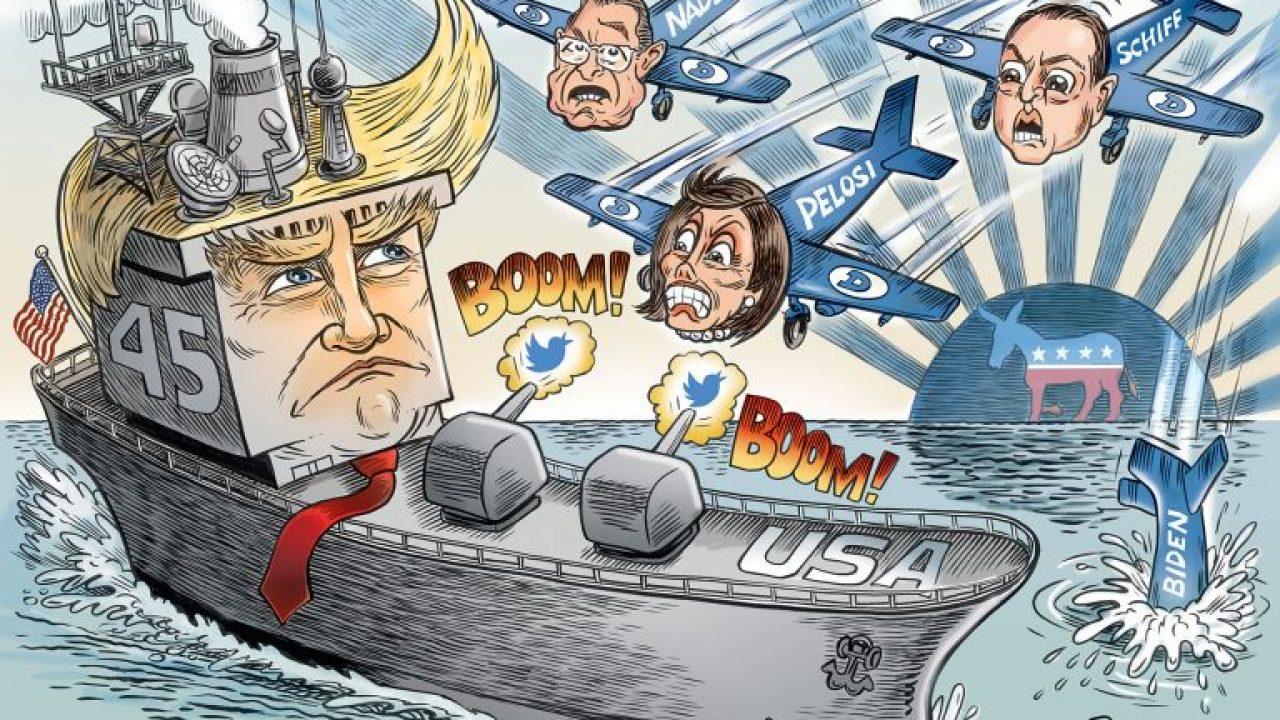 I am not a lawyer, let alone a constitutional scholar, but when I read these things there are a million red hot five-alarms going off in my head. Because this is not about enacting the law, it’s about circumventing it. Just because you have a House majority cannot mean you can simply ignore the minority, or procedure. That would turn democracy into a proxy dictatorship. You don’t want to go there, not even if you’re a desperate Democrat.

But she seems to have made up her mind. So now we face Trump not being allowed to investigate what Joe Biden was up to in the run-up to the 2016 election though his party could turn that same run-up into a 3-year Social Counsel probe, which turned up emptier then .. well, you fill it in. It is something to behold.

Now, if you follow the headlines this week, you wouldn’t know this. because they all talk of impeachment. But you can’t get impeachment without following the official procedure, and Pelosi doesn’t follow it. The media just go along for the ride without caring about procedure.

And obviously you can’t watch this theater and not think that Nancy Pelosi and Adam Schiff et al have not thought about stretching out this whole tragedy for another year, right on the eve of the 2020 election, or even beyond. That they think allegations about Russia, Ukraine and China will help them win.

Because it’s clear that flouting procedure the way they try to do in the House will inevitable have to lead to court decisions, and eventually to the Supreme Court. They’re counting on the damage they can do to Trump while the courts decide. But it won’t just be damage to Trump, however it turns out, it will be damage to the entire country.

And you would think both sides of the aisle recognize that, if we do, but there are very few if any signs of that. Everyone’s gearing up for a very big fight because everyone else in their echo chamber is. The problem is, whatever happens, and whoever becomes president, the dividing lines will only become deeper and darker.

AG Bill Barr, along with the State Department and DOJ, and whoever else is involved, will release multiple reports from investigations conducted by US Attorney John Durham, DOJ IG Michael Horowitz and potentially others. The Dems and MSM viewpoint appears to be that is was fine to appoint a Special Counsel to investigate Trump’s links to Russia, but not Democrats’ links to, well, anyone at all.

And that is just not okay. I saw this very short clip of John Brennan saying:

“I think I suspected there was more than there actually was.”

And that’s supposed to atone for 3 years of incessant smearing? It’s ridiculous. Brennan is ridiculous.

And yeah, I know that’s Fox, and I know I’ve on occasion had to turn to right wing media for news because the MSM have closed ranks and ‘report’ only on one side of the story. Sue me for wanting actual news.

None of this negates the fact that we’re in for ever bitter fights, up to and including at the US Supreme Court, ever more, to decide who rules the country. Just like in Britain.

I don’t think that’s what the Founding Fathers had in mind. At least, unlike Britain, they cared enough to write a Constitution. A lot of good that did.