Joe Biden is clearly not used to being questioned by the media. He thought he still had the Obama administration immunity card, using the race card won’t work either. 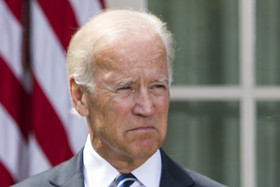 He thought he was going to enter the race for 2020 and get the same slobbering coverage that Obama got from the press in 2008.

Now people in the media are asking him questions about corruption, his son and Ukraine and he is not happy about it.

According to one reporter at MSNBC, he’s furious about it.

During her 10:00 a.m. ET hour show on Friday, MSNBC anchor Hallie Jackson informed viewers that the Joe Biden’s presidential campaign was “furious” that the “media is even covering” any allegations of corruption against his son Hunter. Later in the day, fellow anchor Andrea Mitchell touted a reporter sympathizing with Biden about the “brutal” campaign.

After noting that “the President is clearly going after Joe Biden” with an ad campaign highlighting Hunter Biden’s suspicious business dealings in Ukraine, Jackson proclaimed: “I know that the Biden campaign is furious with the fact that the media is even covering what the President is saying about Joe Biden at all.” Turning to correspondent Mike Memoli, she wondered: “How are they planning to fight back on all of this?”…

In the noon ET hour, anchor Andrea Mitchell eagerly featured a clip of Biden responding to a softball question about the controversy: “Meanwhile, The Reno Gazette, a reporter there, in Nevada, has asked Joe Biden if he expected the race to be this brutal.” The reporter sympathetically asked: “Did you think it would be this hard or the attacks would be so brutal against Hunter?”

Biden has a bigger problem than the media. His fundraising for the last quarter was awful.

We could give Biden the benefit of the doubt and assume that he was not involved in corruption in the Ukraine. The fact that he can’t see why people are questioning what went on and that he refuses to see the conflict of interest. This means he’s either completely corrupt and feels above the law, and/or he is even dumber than we all thought, if that is even possible.

The left have thought  they’re immune from scrutiny, and until Trump came along, they have been.  The left especially the Obama administration has been immune from any scrutiny, they used the IRS to attack conservatives, colluded with foreign government to fix the election, even gave arms to cartels and Mexico and everyone looked sideways.  It about time Obama true “legacy” of corruption and crime is about to be exposed.

It’s a whole new world out there, an end of an era is upon them and Hillary was the last big beneficiary of media malpractice.

This week, the Supreme Court will hear oral arguments in cases that ask whether Title VII of the Civil Rights...