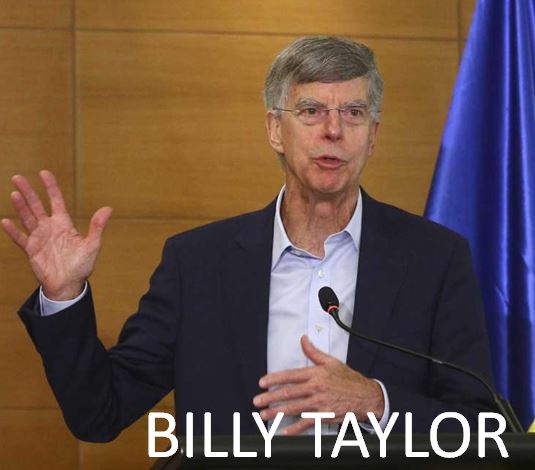 The lunatic Democrats trying anything to remove president Trump were going half crazy today over the so-called “disturbing” accounts from  Former U.S. Ambassador William Taylor, a US diplomat to Ukraine who made the claim that he believed Trump withheld aid to Ukraine in order to force Ukrainian President Volodymyr Zelensky to investigate the Biden crime family.

Democrats have reported that Mr. Taylor testified that US Ambassador to the EU, Gordon Sondland, told him that military aid to Ukraine may have been held up partly because of a push for Ukraine to announce probes into the 2016 election and Joe Biden.

Democrats said Mr. Taylor stood by his previous statement to Ambassador Kurt Volker, “As I said on the phone, I think it’s crazy to withhold security assistance for help with a political campaign,” Taylor said in a September 9 text exchange.

What the Democrats conveniently leave out is that Bill Taylor has zero first-hand knowledge of Trump’s dealings with Ukraine.

In fact, the September 9 text message sent to Kurt Volker was in reference to an August 28 Politico article, NOT because he had any independent information. Of course Democrats in their biased hit job won’t allow for cross examination by Republicans to expose the real details.

Volker’s previous closed-door testimony to lawmakers crushed the Democrats’ quid pro quo argument against President Trump which is why they refuse to release the transcripts from his hearing.

Meanwhile the do-nothing Republican Senators like Lindsey Graham and Richard Burr are sitting idly by while the House Democrats conduct secret impeachment hearings and selectively leak to the media.

Senate Judiciary Chairman Lindsey Graham a couple weeks ago threatened to call in Kurt Volker to testify to his committee publicly because Schiff refuses to release the transcripts…and still nothing.

If this continues, I will call Volker before the Senate Judiciary Committee to testify publicly to ensure the full story is told.https://t.co/jNi3KQ3wRB

“Quid pro quo” is the buzzword, but here are the facts:

How can you have “quid pro quo” when the person on the other side doesn’t even know there’s a quo? pic.twitter.com/HFSGCdSSGB

FACT CHECK: Ambassador Volker explicitly told us yesterday that there was NO quid pro quo between the Trump Administration and Ukraine.

But Democrats don’t want to tell you that. https://t.co/FdAGQDWRz5

In Case You Missed It:  COVID THEATER: Turns out Biden's vaccine mandate for employers was a bluff; no idea when or if OSHA will ever issue rule
Posted in Freedoms and tagged coup, Democrats, Impeachment, Propaganda.

7 Leftist Words in a Dictionary Near You

Consider yourself lucky if you started learning English before last year. With Merriam-Webster Dictionary’s addition of 1,373 new words and...