If impeachment occurs and a Senate trial happens, the GOP has the advantages. It could be a disaster for Democrats. 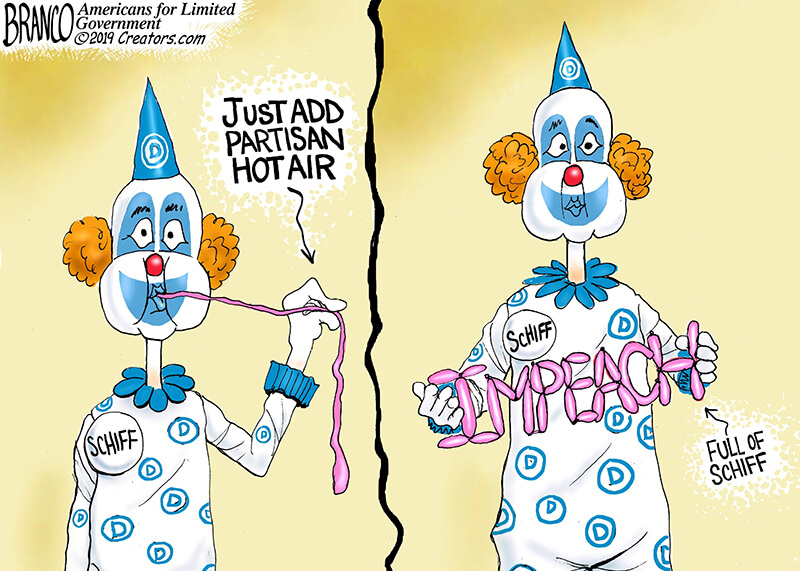 The once distant and gauzy fantasy of impeaching President Donald Trump is becoming very real for Democrats, just not quite how they wanted or expected it to. As we move into public testimony this week, the wheels of presidential removal are stuck in deeper mud than ever. The polls have been flat or reversing back Trump’s way for weeks despite alleged bombshell revelations, and the worst could be yet to come if and when the issue moves to the Senate.

Over the weekend, many Democrats and media allies moved away from the dulcet sound of the Latin “quid pro quo” to the more menacing “extortion” and “bribery,” imagining using a dead language is hurting their messaging.

Many also insisted that the magic of television will persuade voters even if the facts of the case are already known and stipulated for the most part. Not only does this assume that the American people are kind of dumb, it also may rely just a smidge too much on hopes that Ambassador Bill Taylor has some kind of powerful television presence. Could an “end of the Perry Mason episode” moment happen? It is not beyond the realm of possibility, but also extremely unlikely.

So let’s assume that Democrats move forward on Articles of Impeachment next month with essentially the same facts that everyone more or less agrees with and the same polls that show the country bitterly divided on impeachment. For the case to move to the Senate under these conditions would be a disaster for Democrats, for a whole host of reasons. Here are five of them.

1. Losing Control Of the Process

In the six weeks thus far of L’Affaire Ukraine, House Democrats have been in complete control of the process. They have chosen witnesses, whether testimony is in private or public, set the rules of questioning and the schedules. In all these areas, their hand has been firmly on the wheel. It is hard to overestimate what an incredible advantage this is.

One can think of it as being both the director and stage manager of a play. They tell the actors where to go, and work to create a narrative convincing enough to sway the American people. But, of course, two parties can play at that game, and once the case moves to the Senate for trial all of those powerful advantages switch hands. Instead of Reps. Nancy Pelosi and Adam Schiff making the rules, it will be Sens. Mitch McConnell and Lindsay Graham.

Among the advantages the Democrats have had in the House inquiry is that of approving witnesses. Although they allowed Republicans to request witnesses, the authority to approve them is entirely Democrats’.

This came into play this weekend when the GOP requested Hunter Biden be brought in to testify about his knowledge of alleged corruption at the energy company Burisma, where he was making Mr. Burns money for Homer Simpson knowledge. That alleged corruption lies at the heart of the entire impeachment.

Schiff says Biden will not testify, in part because he does not the inquiry to become the very investigation he says he believes is bogus, that President Trump wanted Ukrainian President Volodymyr Zelensky to engage in. In the House, Schiff can block whoever he wants, but it’s hard to see how Democrats could stop the Senate from calling Hunter Biden, and maybe even Joe Biden, in to testify. In that scenario, the investigation Schiff wants shelved will go very public, very quickly, shivving the Democratic frontrunner for president in the process.

3. Senators On The Trail

There are currently six Democratic senators running for president of the United States. Two of them, Elizabeth Warren and Bernie Sanders, are polling in the top three of all candidates. The Iowa caucus in on February 3. So let’s be generous and say Santa gives Democrats Articles of Impeachment by Christmas, We would be looking at almost all of the month of January, at least, taken up with a Senate trial.

What are these senators supposed to do? Do they put their campaign stops on hold for a month to be in the chamber and watch the trial, giving their opponents a huge ground game advantage? Conversely, do they skip the trial in order to campaign and eventually vote to remove a president even though they didn’t bother to attend the trial? Neither of these are very attractive options.

During the Trump era, the time the GOP and conservatives in general have been most united and powerful was during the Brett Kavanaugh confirmation hearings. Note, as discussed above, that was a process controlled by Senate Republicans, not House Democrats, and the picture that emerged was of a qualified man being hounded on the basis of politics, not evidence.

The Senate will try to recreate this energy in much the same way. As they puncture the one-sided story crafted by House Democrats, look for Trump’s support to solidify, just as Kavanaugh’s did. There could be no better outcome for the president, who relies almost solely on his base for electoral success.

5. The Odds Of Winning Are Not Good

Notwithstanding the televisual spectacle we will all be treated to this week during public testimony, the Democrats have already made their basic case to the American people and to Republicans in the Senate. The dream of a few short weeks ago, that cracks would emerge and suddenly senators would start turning on Trump, is now dissipating as dawn rises over an actual vote on impeachment.

Like hungover frat boys who convinced themselves over the raucous night that they would road trip to Mexico the next day, the cruel sun is now glinting off their empties and discarded Juul pods, and they will be going to class after all.

The result? A huge win for Trump, any way you slice it. There are only two outcomes for the trial: conviction and removal, or acquittal. Once acquitted, the president will take so many victory laps that the track will need new asphalt. Democrats will be left holding an empty bag saying, “We did our duty but the process wasn’t fair,” truly the mantra of winners.

So, is there a way out of this mess for Democrats? There may be. Over the weekend if you were very quiet and listened very carefully, a new word started emerging. That word is “censure.” Censuring, rather than impeaching, the president would allow Democrats to claim some measure of holding Trump accountable without the parade of horribles listed above. It might also deprive Trump of the ability to claim total exoneration.

But alas, it may be too late for that. Democrats promised their base blood, and blood will be had. But as in any good fight, once you level your best shot, the other guy gets to hit back.

David Marcus is the Federalist’s New York Correspondent. Follow him on Twitter, @BlueBoxDave.
In Case You Missed It:  Here We Go… CDC is Sounding the Alarm on an “Out-Of-Control” STD Epidemic
Posted in Tyranny and tagged Congress, Democrats, Election, Impeachment, senate.

History being made as President Trump is the first President to speak at New York City Veterans Day Parade.