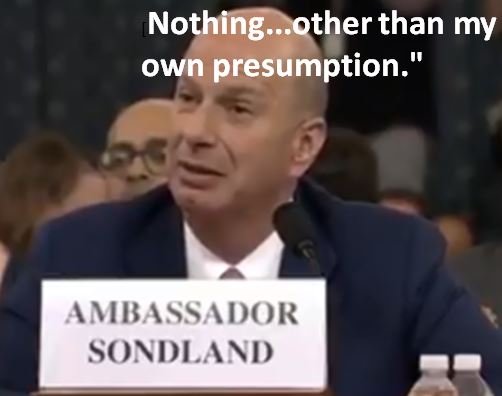 During a break House Intel Chairman and impeachment ringleader Adam Schiff ran to reporters and declared President Trump guilty of quid-pro-quo, bribery and withholding documents from House investigators. Lierals were celebrating this morning, they finally got Trump.

CNN blasted headlines trashing Trump as guilty of an impeachable offense based on Sondland’s testimony, they were pulling out the wine bottles.

Then it went downhill for the Democrats coup yet again, Sondland later clarified that he “presumed” there was quid pro quo, then crumbled under questioning from Congressman Mike Turner (R-OH).

“Mr. Sondland, let’s be clear: no one on this planet—not Donald Trump, Rudy Giuliani, Mick Mulvaney, Mike Pompeo—no one told you aid was tied to political investigations, is that correct?” Rep. Turner asked Sondland.

Notice fake news CNN’s chyron is emblazoned with “SONDLAND: “Yes” There Was Quid Pro Quo in Ukraine Scandal” as Sondland was clearly testifying that there was zero quid pro quo.

Your reminder of what that testimony was… in Gordon Sondland's own words:

[Nothing] "…other than my own presumption." pic.twitter.com/9yyaa9X4BP

Turns out Rush Limbaugh has reported that Sondland and his wife was getting boycotted They apparently own a real estate company and some hotels in the Pacific Northwest.

so what we’ve learned so far today, Ambassador Sondland says that Trump never told him directly that aid was tied to an announcement of investigations, and yet the news of the day is that Sondland has dropped a bomb, that Trump demanded a quid pro quo — and yet there are two different quotes from Sondland today in which it is pointed out that he says the exact opposite, and this is one of them. Trump never told Sondland directly.

Posted in Freedoms and tagged Impeachment.