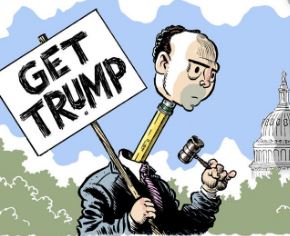 Democrats want you to believe that US aid withheld from Ukraine, the most corrupt country in Europe, was a bad thing.

Trump withheld the aid after the new government took over.
He later released the aid before Ukrainian officials knew it was delayed.

Democrats DEMAND that US taxpayer funded aid be delivered to thankless, anti-American regimes without delay.

On Wednesday Rep. Ratcliffe pressed Schiff witness Under Secretary Hale the many times aids was delayed this past year to questionable regimes.

As Rep. Ratcliffe revealed US aid was also delayed by the Trump administration to Pakistan, Honduras, Lebanon and other countries.

GOP Rep. Ratcliffe: “Having no explanation for why aid is being withheld is not uncommon?”

Under Secretary Hale: “I would say it is not the normal way that we function.”

Rep. Ratcliffe: “But it does happen?”

Under Secretary Hale: “It does happen.”

Trump’s delay in aid to Ukraine was not unique or uncommon.
The fake news media won’t tell you this.

GOP Rep. Ratcliffe: "Having no explanation for why aid is being withheld is not uncommon?"

Hale: "I would say it is not the normal way that we function."

"But it does happen?"

In Case You Missed It:  They're tracking us: In obedience to WHO, international medical classification system adds new diagnosis coding for unvaccinated
Posted in Freedoms and tagged Honduras, Lebanon, Pakistan, U.S. Agency for International Development (USAID), Ukraine.

Rep. Ralph Abraham (R-La.) on Tuesday, Oct. 8, called for the expulsion of House Speaker Nancy Pelosi (D-Calif.) from the...