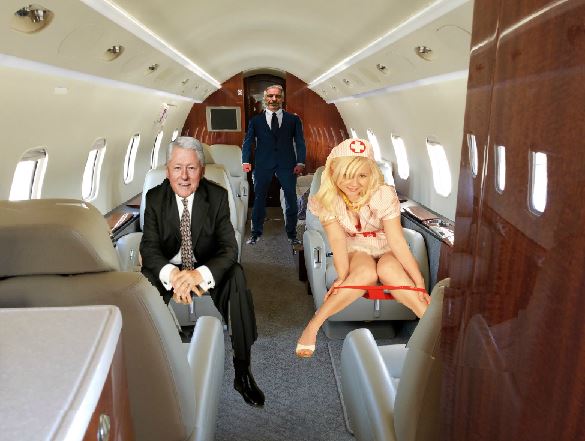 During their discussion Sarnoff told Shannon Bream that Bill Clinton flew on the Lolita Express 27 times.

Then she dropped this BOMB!…

Sarnoff said that ALMOST EVERY TIME that Clinton was on the plane via the pilot logs there were underage girls on the plane.

Conchita said Clinton refused her request for an interview.

Conchita Sarnoff: I know from the pilot logs. And these were pilot logs that were written by different pilots at different times, that Clinton went, he was a guest of Epstein 27 times… Many times Clinton had his Secret Service with him and many he did not. Almost every time Clinton’s name is on the pilot log, there are underage girls.

Fiston interviewed Epstein’s pilots during his investigation. One co-pilot told Fiston that Bill Clinton flew on the plane often with underage girls.

Mike Fiston: He told me the stewardesses on the planes were very young girls. He couldn’t tell me if they were 15, 16, 17. He didn’t know their ages but they were very young. Definitely not over 18.

Jesse Watters: And Bill Clinton was on those flights?

Mike Fiston: Numerous times. And the way these girls were dressed, he would describe them as candy stripers.

Jesse Watters: You’re saying on the flights that Bill Clinton was on with Jeffrey Epstein, the

stewardesses many of them were underage were dressed as candy stripers?

In Case You Missed It:  REPORT: Biden To ‘Cancel’ $10,000 Of Student Loan Debt Per Borrower
Posted in Tyranny and tagged Clinton, rape.

Speaker Nancy Pelosi is just a Useful Idiot and Pawn in a Much Bigger Game.

By Peter Paton   The Communist Democrats see America as just an Asset. An asset that is just part of...