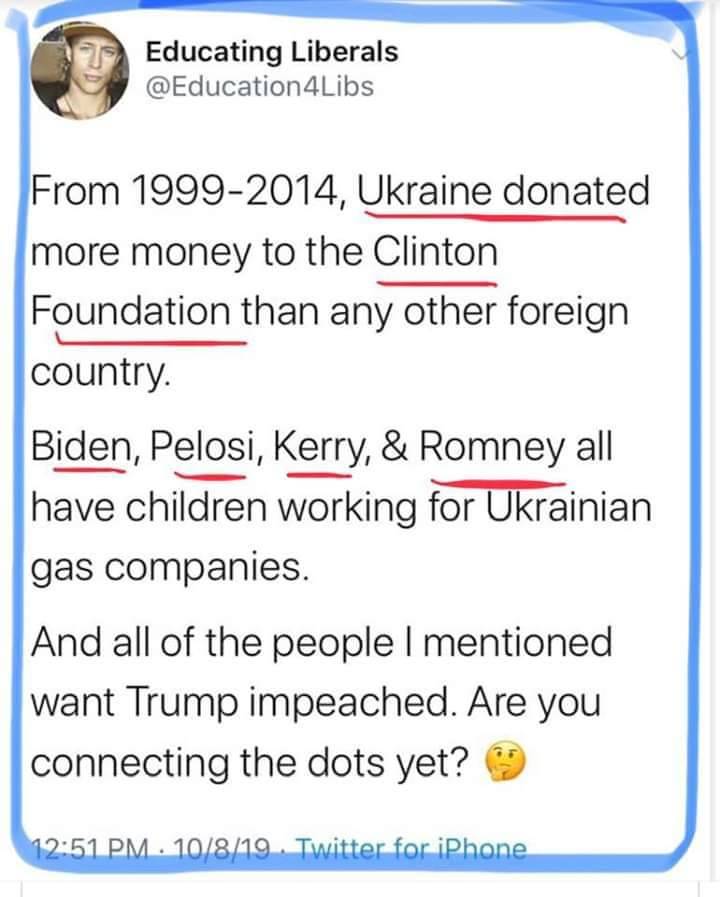 Rudy Giuliani leveled serious new claims at the Bidens in a series of Monday morning tweets. Chief among them is a claim that $3 million was laundered to former Vice President Joe Biden’s son, Hunter, via a “Ukraine-Latvia-Cyprus-US” route – a revelation he claims was “kept from you by Swamp Media.”

Giuliani also says that Obama’s US embassy instructed Cyprus not to reveal the dollar amount.

NEW FACT: One $3million payment to Biden’s son from Ukraine to Latvia to Cyprus to US. When Prosecutor asked Cyprus for amount going to son, he was told US embassy (Obama’s) instructed them not to provide the amount. Prosecutor getting too close to son and Biden had him fired.

Today though it’s the $3 million laundered payment, classical proof of guilty knowledge and intent, that was kept from you by Swamp Media. Ukraine-Latvia-Cyprus-US is a usual route for laundering money. Obama’s US embassy told Cyprus bank not to disclose amount to Biden. Stinks!

Trump’s personal attorney then mentioned China – where journalist Peter Schweizer reported Joe and Hunter Biden flew in 2013 on Air Force Two. Two weeks later, Hunter’s firm inked a private equity deal for $1 billion with a subsidiary of the Chinese government’s Bank of China, which expanded to $1.5 billion, according to an article by Schweizer’s in the New York Post.

Biden scandal only beginning. Lots more evidence on Ukraine like today’s money laundering of $3 million. 4 or 5 big disclosures. Also the $1.5 billion China gave to Biden’s fund while Joe was, as usual, failing in his negotiations with China is worse.

Giuliani then went on to tweet that the Bidens lied about not discussing Hunter’s overseas business.

On Saturday, Joe Biden said he “never” spoke with Hunter about the Ukrainian energy company that Hunter sat on the board of while being paid $50,000 per month. As you’re doubtless aware by now, the elder Biden threatened to withhold $1 billion in US loan guarantees from Ukraine if they didn’t fire the investigator probing the company, Burisma.

Biden says he never talked to his son about his overseas business. Do you think we can prove, with our fact a day disclosures, it’s a lie-a false exculpatory statement. Do we have to prove, or do you already know, it’s a lie, and an incriminating statement.

Hunter, however, admitted in July that the two did speak about his Ukraine business “just once,” telling the New Yorker “Dad said, ‘I hope you know what you are doing,’ and I said, ‘I do’”

Rudy Giuliani: “[Biden’s] family has been taking money from his public office for years, $1.5 billion from China, when our VP is supposed to be impartially and independently negotiating for us? He takes [his son] on Air Force Two to China and the kid … is a drug addict” pic.twitter.com/q8W9ZldwGX

Rudy then lashed out at the Democratic party, which he said would “own” Biden’s scandals if hey don’t “call for investigation of Bidens’ millions from Ukraine and billions from China.”

If Dem party doesn’t call for investigation of Bidens’ millions from Ukraine and billions from China, they will own it. Bidens’ made big money selling public office. How could Obama have allowed this to happen? Will Dems continue to condone and enable this kind pay-for-play?

Here’s what we know about Hunter’s dealings in China based on Schweizer’s reporting via our May report:

Chris Heinz claims neither he nor Rosemont Seneca Partners, the firm he had part ownership of, had any role in the deal with Bohai Harvest. Nonetheless, Biden, Archer and the Rosemont name became increasingly involved with China. Archer became the vice chairman of Bohai Harvest, helping oversee some of the fund’s investments. –New York Post

And while Hunter Biden had “no experience in China, and little in private equity,” the Chinese government for some reason thought it would be a great idea to give his firm business opportunities instead of established global banks such as Morgan Stanley or Goldman Sachs.

Also in December 2014, a Chinese state-backed conglomerate called Gemini Investments Limited was negotiating and sealing deals with Hunter Biden’s Rosemont on several fronts. That month, it made a $34 million investment into a fund managed by Rosemont.

The following August, Rosemont Realty, another sister company of Rosemont Seneca, announced that Gemini Investments was buying a 75 percent stake in the company. The terms of the deal included a $3 billion commitment from the Chinese, who were eager to purchase new US properties. Shortly after the sale, Rosemont Realty was rechristened Gemini Rosemont.

“Rosemont, with its comprehensive real-estate platform and superior performance history, was precisely the investment opportunity Gemini Investments was looking for in order to invest in the US real estate market,” said Li Ming, chairman of Sino-Ocean Land Holdings Limited and Gemini Investments. “We look forward to a strong and successful partnership.”

Three years later, a crack pipe, two DC driver’s licenses and other paraphenelia would be found in a rental car Hunter Biden returned to an Arizona Hertz location in the middle of the night.

The morning after the car was dropped off, a phone number belonging to a renowned local “Colon Hydrotherapist” called the Hertz. The caller identified himself as “Joseph McGee,” who told the employees that the keys were located in the gas cap as opposed to the drop box.

Amazing how so many countries would scramble to do business with Hunter – a guy with virtually no experience who was discharged from the Navy after testing positive for cocaine – who just happened to be the Vice President’s son.

The Liberal Media Is Covering This Up!… HUGE DEMOCRAT MULTI-MILLION DOLLAR CAMPAIGN DONATIONS SCANDAL BROKEN UP! The dominos are starting...