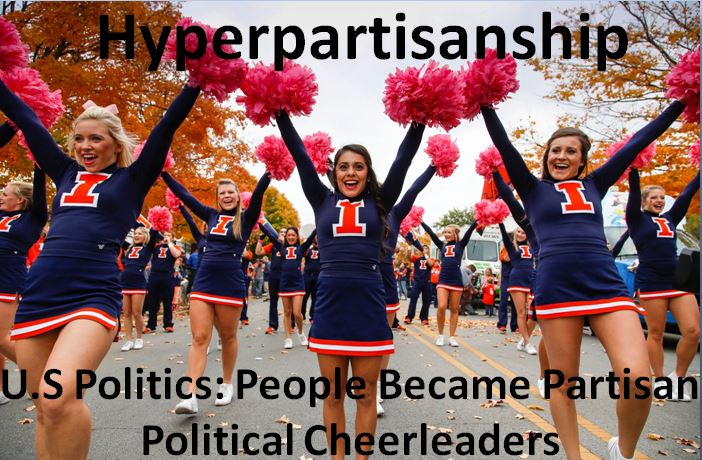 Once upon a time, America was a recognized leader among the governments of the world for a colorblind system of justice that included due process, a presumption of innocence until proven guilty, and a basic common law, common sense right to face one’s accuser in a court of law.

Post-2016 presidential election, America’s devolved into such a hyperpartisan atmosphere that core constitutional concepts are being pushed to the side for cheap political wins. We have become a country of partisan party cheerleaders.

It’s getting to the point it won’t much matter who wins in 2020, Democrats or Republicans, because, in the end, the American people will emerge the losers.

Look at this tweet from President Donald Trump about the whistleblower report on his Ukraine call: “Like every America, I deserve to meet my accuser, especially when this accuser, the so-called ‘Whistleblower,’ represented a perfect conversation with a foreign leader in a totally inaccurate and fraudulent way. Then [Rep. Adam] Schiff made up what I actually said by lying to Congress. …”

Shortly after, Trump again tweeted this: “… In addition, I want to meet not only my accuser, who presented SECOND & THIRD HAND INFORMATION, but also the person who illegally gave this information, which was largely incorrect, to the ‘Whistleblower.’ Was this person SPYING on the U.S. president? Big Consequences!”

And what’s wrong with that?

Yet CNN drummed up the hysteria and painted Trump’s call as threatening.

“Trump,” one CNN report read, “escalated his attacks on the whistleblower — demanding to meet his ‘accuser’ face to face during a day of rage-filled tweets about the Democratic attempt to impeach him.”

“Whistleblower’s lawyer says Trump is endangering his client,” by calling for “‘the person who gave the whistleblower the information’ to be publicly identified,” the news outlet wrote.

And from The Guardian, this: “Trump lashes out at whistleblower and renews attack on House intelligence chair.”

The point is this: So freaking what?

Yes, whistleblowers have their protected rights to whistle-blow. But there are limits to what accusers can accuse, based on hearsay, while keeping their identities in the dark. Americans deserve truth in justice, not question marks about motives.

Trump’s call for his accuser to come forward isn’t just human nature — really, it’s what anybody in his position would do. But it’s also based on U.S. law. It’s also based on long-held and admirable notions of U.S. justice that give the accused the right to know who’s doing the accusing — so ultimately, the why’s of the accusations can be discerned.

So ultimately, the innocence or guilt of the accused, as well as the motivations of the accuser, might be exposed.

The fact that some actually find controversy in Trump’s demand to know the identity of his accuser just shows how far this nation’s straying from its most basic of constitutional protections, and also, sadly, despicably, how willing some are to trade short-term political wins for the long-term sustainability of America.

If we can’t manage to navigate today’s hot political climates without decimating crucial freedoms in the process, without killing the basic concepts of U.S. justice, America will soon enough reach a time when the political parties of officeholders won’t matter at all.

“The presumption of innocence is deeply rooted in our nation’s history and tradition, such that it is implicit in the concept of ordered liberty,” attorneys with the Institute for Justice wrote in filings before the U.S. Supreme Court, “Shannon Nelson and Louis Alonzo Madden v. Colorado.”

Giuliani reportedly traveled to Budapest and Ukraine this past week to meet with several Ukrainian officials about corruption. OAN reporter...