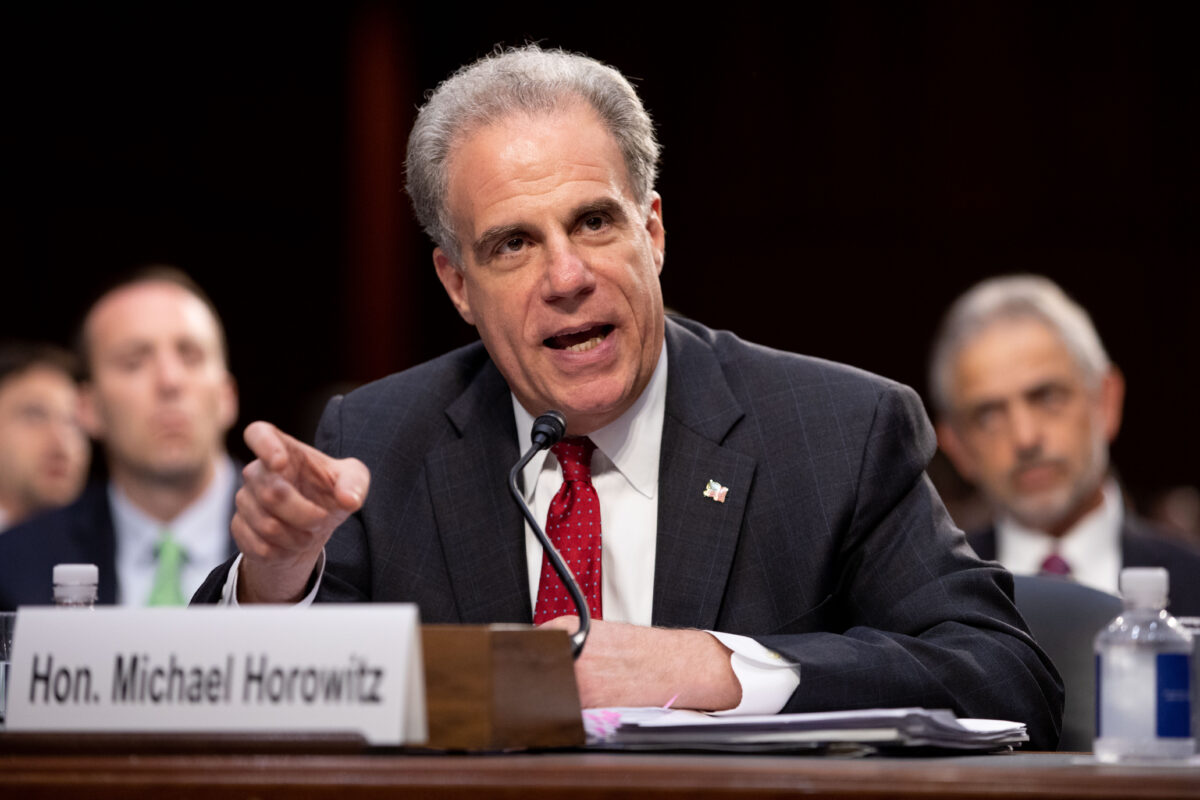 Like disgraced former FBI director James Comey before him exonerating Hillary Clinton for her crimes, DOJ inspector  general Michael Horowitz presents us with a documented list of crimes, fraud, and deception in the FISA warrant application process by the FBI but then says never mind — these are  bureaucratic mistakes made without bias and without intent.  There still was sufficient predicate, says he, for starting an investigation and surveillance of Team Trump, even as Horowitz admits that the first FISA warrant, the one authorizing  surveilling Carter Page, was riddled with errors and omissions of key exculpatory evidence.  It was the first of four frauds committed on the FISA court, a felony.

We have confirmation that the first FISA application, at least, was based almost solely on what Comey himself called the “unverified and salacious” Steele dossier, paid for by the Clinton campaign and the DNC.  Yet the FBI “forgot” to ask or inform the court who paid for it.  Former deputy FBI director Andrew McCabe has stated that without the Steele dossier, there would have been no FISA warrants at all and no investigation of Team Trump.  Ironically, this was confirmed by the I.G. Report:

The much awaited Foreign Intelligence Surveillance Act (FISA) report, conducted by Inspector General Michael Horowitz, was released today.  It finds that the FBI would not have had enough claimed evidence to secretly surveil former Trump aide Carter Page, and thus the Trump 2016 campaign, without using a “dossier” of opposition research funded by the Hillary Clinton campaign.

In 2016, after Page left the Trump campaign, the FBI asked the Foreign Intelligence Surveillance Court (FISC) for a warrant to secretly surveil Page.  The FBI said it was concerned that Page had ties with the Kremlin in Russia, but their only confirmation of these allegations came from former British intelligence officer Steele.

Steele authored the “dossier” that alleged ties between President Trump and Russia. Steele was hired by Fusion GPS, a research group that received funding from a law firm representing Hillary Clinton’s campaign as well as the Democratic National Committee. …

On November 2017, a British top national security official warned U.S. officials in a memo that Steele should not be trusted.  This information was originally published by The Hill, corroborated by Rep. Devin Nunes (R-Calif.), and mentioned in a filing by Lt. Gen. Michael Flynn’s lawyers.  Yet the FBI subsequently applied for two more reauthorizations of their surveillance of Page.

Yet Inspector General Michael Horowitz, while acknowledging “significant inaccuracies and omissions” in FISA applications that precipitated one of the greatest abuses of investigative power in our lifetime, dismisses them as showing no intent, no bias.  Nothing to see here.  Move on.

Investigative reporter John Solomon begs to differ and finds that the odds of so many inaccuracies and omissions being unintentional boggles the mind.  Solomon notes based on the Horowitz report 51 violations of Woods Procedures to vet evidence, 17 significant errors in FISA application, 9 false statements, 9 inaccurate statements, 33 statements without verification or supporting evidence, and 4 informants used to target the Trump 2016 campaign.  Like Hillary’s deletion of 33,000 emails under subpoena, Mr. Horowitz, this was no accident.  This we call intent.

The FBI knew that Carter Page was not a spy and was something of a government informant who briefed the government on all his trips to and activities within Russia.  Tellingly, the “spy” who allegedly triggered all this was never arrested, or charged with anything, and allowed to roam the globe freely.

The FBI knew that the first FISA warrant was based on a fraudulent dossier.  They knew that Christopher Steele could not be trusted.  They knew that Trump’s political enemies financed the dossier.  Yet they plowed ahead through multiple FISA applications, knowing they were all based on a bunch of lies, that they were committing a fraud upon the court and  that anything  they did find in their “investigations” would rightfully be dismissed in a court of law as “the fruit of a poisoned tree.”  All those who signed the FISA applications are felons and should be prosecuted.

A February 2, 2018 memo issued by the House Intelligence Committee, then chaired by Rep. Devin Nunes, noted that the Deep State coup against President Trump had many architects:

The memo states that Former FBI Director James Comey, Deputy Attorney General Rod Rosenstein, former Deputy Director of the FBI Andrew McCabe, and former Attorney General Sally Yates were all required to sign off on the FISC warrant application before it was reviewed and ultimately approved.

“As required by statute (50 U.S.C.), a FISA order on an American citizen must be renewed by the ISC every 90 days and each renewal requires a separate finding of probable cause. Then-Director James Comey signed three FISA applications in question on behalf of the FBI, and Deputy Director Andrew McCabe signed one.  Sally Yates, then-Acting DAG Dana Boente, and DAG Rod Rosenstein each signed one or more FISA applications,” the memo reads.

The memo further claims those officials were aware at the time of their signing that the unsubstantiated Steele opposition research dossier, which was included to bolster their warrant application, was paid for by the Democratic National Committee (DNC) and the Clinton campaign; but the application did not include that information.

They were all in on it.  They all knew.  They all lied to the court.  They are all, as yet, unindicted co-conspirators in this criminal plot to overthrow a duly elected president of the United States.  Fortunately, neither A.G. William Barr nor U.S. attorney John Durham, who has prosecutorial powers, is amused or misled by Horowotz’s sophistry.  Durham said in a statement.

I have the utmost respect for the mission of the Office of Inspector General and the comprehensive work that went into the report prepared by Mr. Horowitz and his staff.  However, our investigation is not limited to developing information from within component parts of the Justice Department.  Our investigation has included developing information from other persons and entities, both in the U.S. and outside of the U.S.  Based on the evidence collected to date, and while our investigation is ongoing, last month we advised the Inspector General that we do not agree with some of the report’s conclusions as to predication and how the FBI case was opened.

Durham and Barr will not let this slide.  The parties concerned had better lawyer up.

Daniel John Sobieski is a former editorial writer for Investor’s Business Daily and free lance writer whose pieces have appeared in Human Events, Reason Magazine, and the Chicago Sun-Times among other publications.

In Case You Missed It:  Buisness Is So Good At The ‘Let’s Go Brandon’ Store That They’re Expanding
Posted in Tyranny and tagged deep state, Spygate.

In the 1980s, Patricia Rucker’s family left Venezuela, planning that her father would work for a time in the U.S....