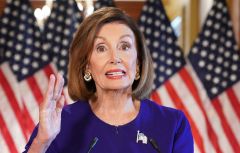 Nancy Pelosi has suggested she will delay sending the articles of impeachment to the Senate in order for Democrats to build up more evidence against Trump and delay a swift acquittal.

Last night, the House voted along party lines to impeach Trump, a partisan political move that enables Democrats to continually undermine and discredit Trump as the “impeached President.”

However, with the effort virtually guaranteed to fall flat in the Senate, Democrats are planning to delay and drag the process in yet another underhanded stunt.

Following the impeachment vote, Pelosi said she would withhold the articles of impeachment until the Senate makes rules that she determines will be “fair” to the prosecution.

“We have legislation approved by the Rules Committee that will enable us to decide how we will send over the articles of impeachment,” Pelosi told reporters Wednesday.

“We cannot name [impeachment] managers until we see what the process is on the Senate side.”

She added that “so far, we haven’t seen anything that looks fair to us” in the Senate.

Nancy Pelosi: "We have legislation approved…that will enable to decide how we send over the articles of impeachment."

"We cannot name managers until we see what the process is on the Senate side…so far we haven't seen anything that looks fair to us." https://t.co/KV8jBJCHcL pic.twitter.com/LcgasQXGHv

The Conservative Treehouse blog describes this as a “cunning Lawfare ploy” that was a “pre-planned procedural process by design.”

“Now the delay in sending the articles of impeachment allows the House lawyers to gather additional evidence while the impeachment case sits in limbo.”

“The House essentially blocks any/all impeachment activity in the Senate by denying the transfer of the articles from the House to the Senate. Additionally, the House will now impede any other Senate legislative action because the House will hold the Senate captive. Meanwhile the Democrat presidential candidates can run against an impeached President.”

Knowing that the Senate will never vote to impeach Trump, Democrats plan to use the House impeachment vote as yet another tool with which to undo the results of the 2016 election, keeping Trump under a permanent cloud of suspicion right through 2020.

However, as Byron York noted rather pointedly, this is entirely disingenuous considering the Democrats pre-impeachment utterances:

“How do Democrats impeach and withhold when they’ve been telling everybody Trump must be removed right now because he poses an immediate threat to our elections?

Would Dems go straight from pre-emptive impeachment to deferred impeachment?”

And remember, the public is now against impeachment broadly…

In Case You Missed It:  Retiring Never-Trumper Fred Upton: It Will Be Hard for Uniparty to Stop Trump in 2024 and He Will be the Candidate (VIDEO)
Posted in Tyranny and tagged coup, Democrats, House Minority Leader Nancy Pelosi, Impeachment.

Trump Didn’t Receive Due Process, So How Can Americans Trust The Impeachment Process?

Source: The Daily Caller Politics   Innocent until proven guilty. Confronting and questioning your accuser. Knowing the evidence against you. Defending...