California’s Proposition 13, arguably the most famous and influential ballot measure in the nation’s history, turns 40 this year. The law saved property owners taxes as much as 60 percent keeping homes affordable for the middle class.

Some leftist progressives in California think it’s long past time to update the law and keep homes affordable. The same leftist that complain about Gentrification (a process of changing the character of a neighborhood through the influx of more affluent residents making it more expensive) are wanting to raise property taxes, that is ironic as that would cause in increase rents and homeownership costs, also making area more unaffordable for the working and middle class people.

Liberals always want more taxes, most those taxes are sucked up into government waste. Hunter Biden job in Ukraine gives you an idea how our tax/Aid money was used in Ukraine and kicked back to elite Democratic politicians and their families and friends. The property tax increase will be effectively the very same thing.

But there’s plenty of disagreement over what to do with Prop. 13 — as evidenced by two separate ballot measures this year that seek alternatively to weaken the law or to strengthen it.

Approved by voters in June 1978, Prop. 13 requires a two-thirds majority to raise state or local taxes and places strict caps on property tax rates. Taxes can be no higher than 1 percent of a property’s cash value and can increase by only 2 percent a year, as long as a homeowner remains in place. Once a property is sold, however, it is reassessed at current values.

Baby Boomers and retired people on fixed incomes are going to get clobbered. Many bought home in the 1980 for 1/10th what they are worth today.  Say someone who purchased a home in 1980 for $60,000 in the Los Angeles suburb of Playa Del Ray.  Today that home is worth $1.2M, prop 13 limits the property tax increase so those retired on social security pay taxes based on the original sales price with ceilings on increases capped at 2% a year.

Once repealed the property tax base would increase to the current value, go grandmas taxes will not be based on $1.2 million.

Most will be forced to move out of state. A home in , grandma is going to have to move her Social Security won’t cover the taxes on a $1.2M assessment.

Progressive policies are already hurting the state of California.

It is already known for high taxes, a massive homeless problem, disease in the cities, and human waste in the streets.

All of this combined is causing people to flee the state, add repealing prop 13 and your going to see the exodus out of the state quadruple.

Repealing prop 13 will immediately cause a property tax increase, causing an increase in all rents for the leases as landlords will have to absorb the costs and for homeowners. California is already unaffordable for many, the middle class is struggling with in some cases as much as 50% of their income before taxes going toward their mortgage payments.  Increase the property taxes and they will be forced to sell. 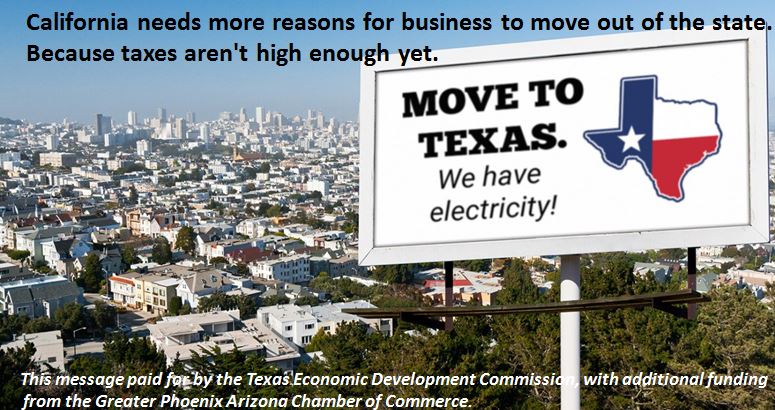 According to the The Associated Press report the state is already have issues.

More people are leaving California than moving in, evidence of the toll the state’s housing crisis is taking as the world’s fifth largest economy inches toward 40 million people.

An estimate released Friday by the California Department of Finance put the California’s population at 39.96 million, just shy of the 40 million milestone demographers had predicted the state would have passed by now.

The report shows California added more than 180,000 people when accounting for births and deaths for the 12 month period ending July 1. But when you include people who moved in and out of the state, California lost 39,500.

State officials say it is the first time since the 2010 census that more people left California than moved in over the course of a year, contributing to the state’s slowest recorded growth rate since 1900.

“People won’t move here because they can’t afford to come in the door,” said Dowell Myers, professor of policy, planning and demography at the University of Southern California. “The jobs are there. The people aren’t there.”

There is already a homeless crisis in California due to the unaffordability of rents.

An estimate of annual homelessness in the U.S. released Friday by the federal government shows that the number of people living on the streets increased 2.7 percent this year over last because of crisis-level housing issues in California.

The nation’s most populous state experienced a 16.4 percent increase in homelessness in 2019, the report by the Department of Housing and Urban Development said, even though voters approved a $4 billion affordable housing bond more than a year ago, and Los Angeles passed its own $1.2 billion housing bond in 2016.

L.A. has been slow to spend its money on shelters because of neighborhood opposition, and the state’s largest coastal cities have long experienced housing prices and rents that exceed the budgets of many families. In November, San Francisco voters approved $600 million in bonds for affordable housing.

Repealing Prop 13 could be the the final nail in the coffin.

Signature collection has commenced on a ballot measure that would gut Prop 13 property tax limitations.  Known as “split-roll,” the initiative would impose a massive tax hike on properties.

Politicians have already given the tax-hike measure a deceptively attractive title of “Increases Funding for Schools, Community Colleges, and Local Government Services by Changing Tax Assessment of Commercial and Industrial Property.”

Conveniently, this title for the ballot measure removes any mention of the real proposal – A MASSIVE TAX INCREASE.

What’s worse, proponents of this tax hike initiative are now collecting signatures in front of stores with signs that say “Save Prop 13!”

Backers of this tax hike measure need over 1 million signatures of registered voters to place the item on the November 2020 ballot.

By hiding the true nature of the ballot initiative with a misleading title – and by outright lying to voters in front of stores to get signatures – the backers of this tax hike measure have shown they are absolutely comfortable resorting to fraud to impose their tax hike.

If you want to protect Prop 13 and stop massive tax hikes in California, you need to do two things IMMEDIATELY:

No tax increase will ever be big enough to satisfy the wasteful spending of Sacramento politicians! Help defend Prop 13 today!

California politicians have a spending addiction – and no tax increase will ever be big enough to satisfy their habit.

TEL AVIV – Three Jewish Israelis have been indicted for praying at Judaism’s holiest site, the Temple Mount compound in...