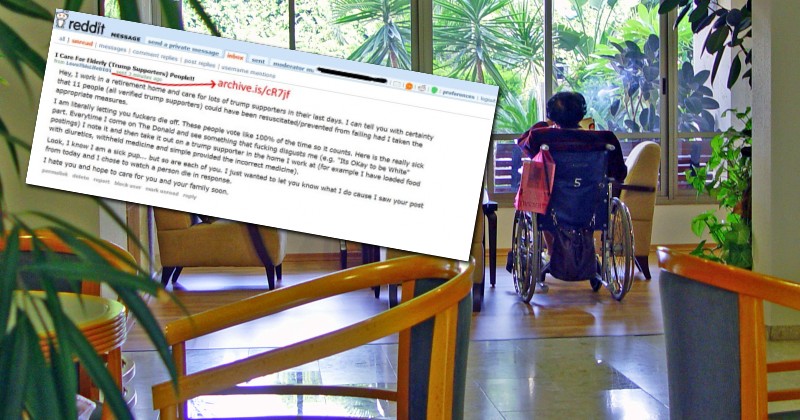 “I am literally letting you f***ers die off.”

A liberal progressive person purporting to be a retirement home worker claimed in a Reddit post to have helped kill 11 people as revenge for them being Trump supporters.

The user, who used the handle ‘LoveThisLife0101’, said that they refused to resuscitate, withdrew medicine and tampered with the food of elderly residents.

The full message reads as follows;

Hey, I work in a retirement home and care for lots of trump supporters in their last days. I can tell you with certainty that 11 people (all verified trump supporters) could have been resuscitated/prevented from falling had I taken the appropriate measures.

I am literally letting you f***ers die off. These people vote like 100% of the time so it counts. Here’s the really sick part. Everytime I come on The Donald (r/thedonald) and see something that f***ing disgusts me (e.g. “It’s OKay to be White” postings) I note it and then take it out on a trump supporter in the home I work at (for example I have loaded food with diuretics, withheld medicine and simple [sic] provided the wrong the incorrect medicine).

Look, I know I am a sick pup… but so are each of you. I just wanted to let you know what I do cause I saw your post from today and I chose to watch a person die in response.

I hate you and hope to care for your family soon.

“His account was a year old and had significant (and violently anti-Trump) activity, meaning it was not created minutes ago as a throw away troll account,” source who received the same message via a private DM told National File.

The account that made the post has now been deleted and the incident has been reported to the FBI.

After the user was identified with 4chan, Twitter users messaged AMN Healthcare, his alleged employer, asking them to investigate the situation.

“The individual by that name who works for us is not a clinician, does not work in a clinical setting or work in a location where patients are cared for. However, we take this very seriously and are conducting a thorough investigation,” AMN Healthcare responded.

[2/2] The individual by that name who works for us is not a clinician, does not work in a clinical setting or work in a location where patients are cared for. However, we take this very seriously and are conducting a thorough investigation.

The original message was reportedly prompted by the ‘It’s okay to be white’ meme garnering news attention and appearing on The Donald subreddit. The Reddit user had also posted numerous other anti-Trump post

Hundreds of Iranian-backed activists stormed the US Embassy in Baghdad on Tuesday. Iraqi security forces failed to stop the siege...