The Unthinkable: Soleimani Executed in Iraq

Qasem Soleimani, the “shadow commander,” Israel’s “most dangerous enemy,” has been killed in Iraq alongside his key disciple Abu Mahdi al-Muhandis. An airstrike near or at Baghdad International Airport targeted a motorcade with the men in it just days after their followers stormed the US Embassy compound and scrawled “Soleimani is our leader” on its walls. US President Donald Trump approved the airstrike. The Pentagon confirmed the US killed the Iranian Quds Force leader. The US said Iran was responsible for killing 608 US troops during the Iraq war.

The unthinkable has happened. The man behind Iran’s drive for regional hegemony, who commanded the Quds Force of the Islamic Revolutionary Guard Corps, has been targeted. This time, unlike all the previous times where he got away, he has met his end.

Reports emerged after four in the morning, Iraqi time. A mysterious airstrike near the airport had led to rumors of its closure hours earlier. Two flights were inbound at the time. A Pegasus and Iraq airways flight. Three or four rockets impacted near the airport. US helicopters were reported buzzing in the distance.

It appears a cryptic tweet from US Defense Secretary Mark Esper announced the US policy to begin pre-emptive strikes against Iranian adversaries or their proxies. “To Iran and its proxy militias: We will not accept the continued attacks against our personnel and forces in the region. Attacks against us will be met with responses in the time, manner and place of our choosing. We urge the Iranian regime to end malign activities.”

It is not known if the US acted alone or who else may be responsible for the airstrike. US Secretary of State Mike Pompeo had called Middle East leaders in the last days to firm up support and discuss strategy. He called Prime Minister Benjamin Netanyahu, UAE Crown Prince Mohammed bin Zayed Al Nahyan and Crown Prince Mohammed Bin Salman in Saudi Arabia. He also phoned Iraqi leaders and Qatar. He warned Muhandis as well as Qais Khazali, a Shi’ite militia leader the US had sanctioned. He then warned the leaders of the Iranian-backed Popular Mobilization Units, Hadi al-Amiri and Faleh al-Fayed. 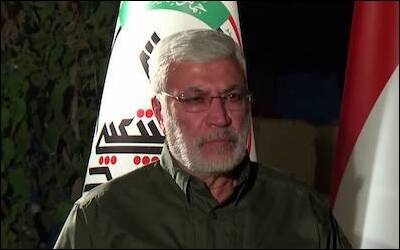 Muhandis was responsible for the attack on US forces at K-1 on December 27 that resulted in a US contractor death. He has been responsible for attacks on Americans since the 1980s. Qais Khazali has also been responsible for attacks, and was held at Camp Cropper in 2007. But it is Muhandis who was always the head of the powerful Iranian support for a network of militias in the region that helped guide this policy. Muhandis was key to supporting Hezbollah and worked closely with Imad Mughniyeh of Hezbollah in the past. Mughniyeh was killed in 2008.

It is difficult to estimate Iran’s response but the regime will want to respond not only to this attack but also the initial US attack on December 29 that killed two dozen members of Kataib Hezbollah. That series of five airstrikes in Iraq and Syria is now overshadowed but it was important because it showed the US would act against Iran’s attacks. Since May of 2019, Iran has been attacking not only the US but also Israel, Saudi Arabia and oil tankers in the region. It downed a US drone and sent proxies inn Iraq to fire rockets at least 12 times at US bases. These rocket attacks targeted key facilities including the Green Zone, Camp Taji, Assad and Balad base and Qayarrah. Iran also fired rockets at Israel in January, September and November of 2019. It attacked Iran’s Abqaiq facility in September with a drone swarm. It also sent Kataib Hezbollah to attack Saudi Arabia in May and to establish bases and arms trafficking networks across Iraq. In Syria Iran built a new base called Imam Ali at the Syrian border with Iraq.

In short: Iran’s activities in 2019 were accelerated and represented an increasing threat to Iraq, Syria, Lebanon and Yemen, as well as a threat along 3,000 miles of frontline from the Lebanese border with Israel to the Gulf of Oman and Yemen. Soleimani was a key part of constructing Iran’s threats along this line. Muhandis was, as his name suggests, the engineer who helped to build up Iran’s role in Iraq and also into Syria.

These men, Soleimani, Muhandis and their network, were personally austere and frugal. They dressed in almost everyday clothing without chests festooned with a salad of medals. They went among the civilian populace and among their men as one of them. They were often mild in their manners. Videos of Muhandis show him relaxing, laying on the ground for to catch a few seconds nap and speaking softly. These men represented a dangerous threat not because of their boasts but because of their practicalities and decades honing their abilities.

Soleimani was born in 1957. Muhandis in 1954. They were in their twenties during the Iranian Islamic Revolution. That made it a formative moment in their lives and the revolution guided their lives from then on. For them the US and Israel were the main enemies. They were the “resistance.” Also, Saudi Arabia and other countries were their enemies. But they focused zeal towards removing Western powers and advancing Iran’s interests and the interests of a wider Iranian-aligned Shi’ite community.

In the 1980s, Muhandis and those like him supported terrorism against US diplomatic facilities from Kuwait to Lebanon. This was their field of operations. It took them a while but they built up franchises like Hezbollah in Lebanon and Kataib Hezbollah in Iraq. Only after 2010 could their dreams finally be realized. In the wake of the Arab spring and the chaos unleashed they mobilized men to confront the ISIS threat and filled its vacuum with their own bases and fighters. This is how Kataib Hezbollah of Iraq ended up in Syria with Hezbollah.

It was only in the last two years that their dream of a Middle East dominated by Iran was reached. They were arrogant. They had the kind of arrogance they accused the West of. No longer in the shadows those like Soleimani and Muhandis came into the open. They acted like the heads of state. Their militias in Iraq, called the Popular Mobilization Units (PMU) appeared to dominant not only the security forces but also the parliament. They had the second largest party in Iraq and access to 300,000 men they had recruited. Most of these were just young Shi’ites who wanted to fight ISIS. A smaller cadre of men in PMU brigades were what mattered. They stockpiled munitions and since August 2018 moved Iranian ballistic missiles across Iraq to Syria. In Syria they built a network of bases from Imam Ali to T-2, T-4 and others. This network sought to move precision guided munitions to Hezbollah in Lebanon. It also sought to import air defense, the 3rd Khordad system, in April 2018. Israel carried out more than 1,000 airstrikes against Iranian entrenchment in Syria and Israel’s Chief of Staff Aviv Kochavi said in December that Israel would act against Iranian entrenchment in Syria and Iraq.

For Soleimani and Muhandis, all was well in December even as US rhetoric increased. They did not believe the US would decisively respond, as Pompeo threatened. They had seen national security adviser John Bolton and other Iran hawks go. They judged US President Donald Trump an isolationist. They tried to push the US, via attacks in the Gulf and against Saudi Arabia and then against US forces. The US said 11 attacks targeted bases since October.

Finally, after the killing and wounding of Americans on December 27 the US acted. 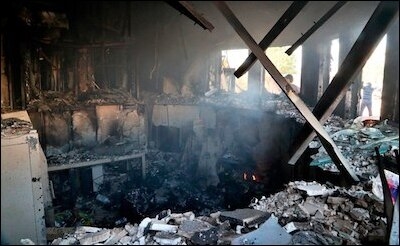 The reception room at the US Embassy in Baghdad was destroyed in a December 29 attack by pro-Iranian militiamen.

Kataib Hezbollah responded on December 29 with the attack on the US embassy. Working with Badr Organization commander Hadi al-Amiri who plays a role in the PMU and parliament, they opened the gates to the Green Zone and PMU members in fatigues assaulted the embassy. They wrote “Soleimani is my leader” on the guardhouses. It was a symbol. They were saying Soliemani runs Iraq and Baghdad, not the US.

Forty-eight hours later Soleimani and Muhandis were targeted in an airstrike near the airport. It is a fitting end to men who believed there would be no response to provocations. It will be a blow to their organizations and network as killing Mughniyeh was a blow. But they still have cadres and loyalists. Qais Khazali, Hassan Nasrallah and Hadi al-Amiri are still in Iraq and Lebanon. Iran’s IRGC has powerful people in charge of it and it has developed new drone and missile technology. The US has sent a powerful message that killing Americans will not be forgotten or tolerated.

Seth Frantzman, a Middle East Forum writing fellow, is the author of After ISIS: America, Iran and the Struggle for the Middle East (2019), op-ed editor of The Jerusalem Post, and founder of the Middle East Center for Reporting & Analysis.

In Case You Missed It:  Here’s how AbbVie gamed the U.S. patent system to generate $114 billion in revenues from Humira drug
Posted in Freedoms and tagged Iran, Iraq, Military, President Donald J Trump.

Things are moving with lightning speed in Iraq right now. Reports are fragmentary and disjointed, though not as fragmented and...